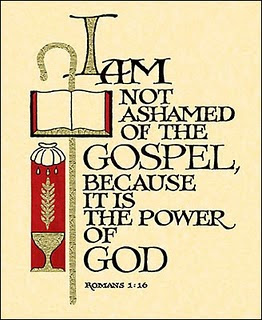 I was ordained into the Office of the Holy Ministry and installed as parish pastor of Peace Evangelical Lutheran Church in Alma, MI.  This was a pretty significant event not only in my life (duh!), and not only in the lives of my family (again, duh!), but also in the life of this congregation.  Of course, every time the Lord of the harvest sends a man to serve a congregation of His people in His stead and by His command, it's pretty significant.  But, in this case, there was added significance, since this congregation had been vacant for over 15 years!  They were not without pastoral care during that lengthy time frame, as many pastors filled in, some serving on a part-time basis for extended periods, but they didn't have their own pastor, called by them and sent by the Lord to serve them full time.

Additionally, while five years seems a rather minor milestone, in the life of this congregation, it is pretty major, considering that of the other seven full-time parish pastors who preceded me, only two served for more than five years - Rev. Ronald Mueller, who served for five years and five months, and Rev. Duane Florschuetz, who served for five years and eight months.  Thus, if the Lord grants me another nine months of service here at Peace, I will have served here longer than any other pastor.  This history of short pastorates, a few of which were cut short due to severe conflict in the congregation, along with the congregation being vacant for over fifteen years, have presented many unique challenges during my first five years of service here.  There have been some rocky times along the way, but the Lord has been with us and has seen us through those times, and He has blessed us with remarkable peace and unity.  It has been a pure pleasure to serve this beloved congregation these past five years and I pray that the Lord will grant us many more years together.

And it all began on July 24, 2005, which was the hottest day ever recorded in the history of this planet.  Okay, so maybe it wasn't THAT hot, but it was HOT!  The brother pastors in our circuit who were there still talk about how hot it was that day, as do the many members of the congregation and the many family and friends who were there.  In fact, it was largely due to the extreme hotness of that day that the plan to install air conditioning was expedited and accomplished in short fashion (see, the Lord does work all things together for our good! :).

Not only was it HOT, but the place was packed to the gills (our overflow area was overflowing that day).  Having just completed my vicarage at Immanuel, Frankentrost, several members there came for the event, including Pr. Mark Loest, who ordained me.  Several family and friends turned out as well, along with several pastors from our circuit and a few from outside our circuit, not to mention the many members of Peace itself.  It was packed, more packed than our little congregation has ever been.  And, of course, that only added to the hotness! :)  But, what a blessing to share this day with so many!

I'll never forget that day.  It was without a doubt the most surreal moment of my life.  Me, a pastor?  That still boggles my mind.  That the Lord has called me into His Office and kept me in that Office these past five years truly proves the validity of the saying, "The Lord works in mysterious ways."

Anyway, here are a few pics in remembrance of that day: 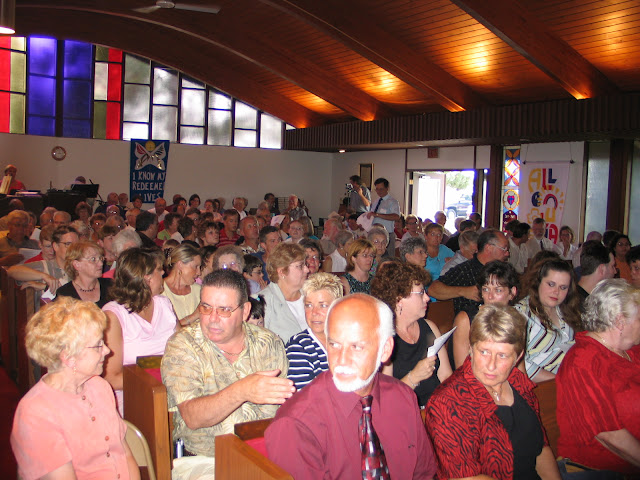 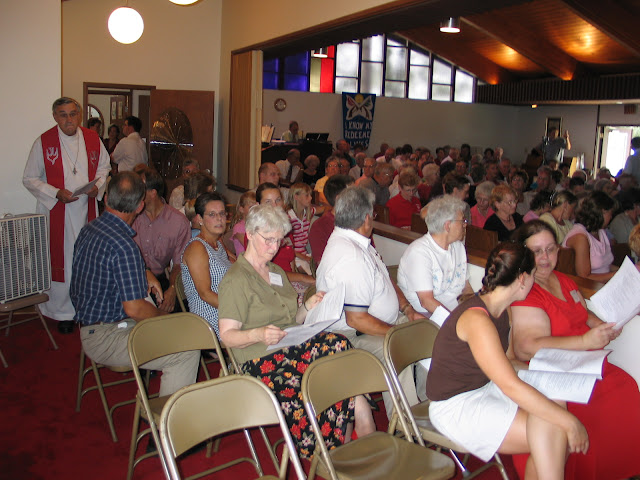 I told you the place was packed!  At this point, there are still people coming in, too! 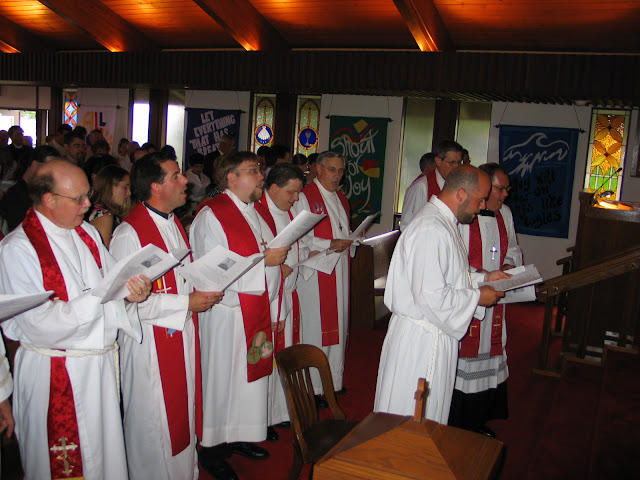 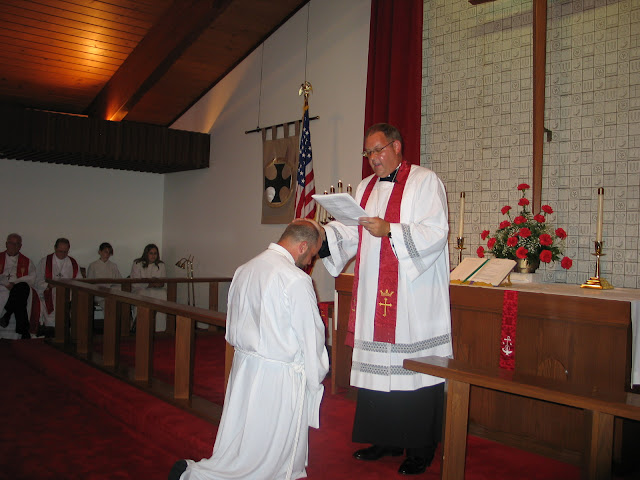 Rev. Mark Loest ordaining me into the Office of the Holy Ministry 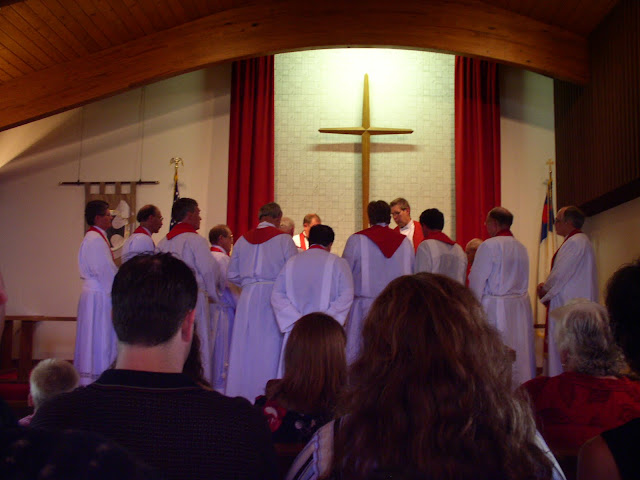 The laying on of hands 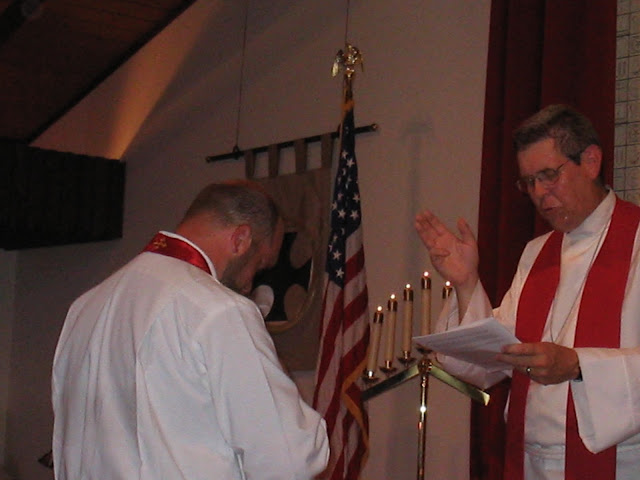 Rev. David Reed installing me as Pastor of Peace 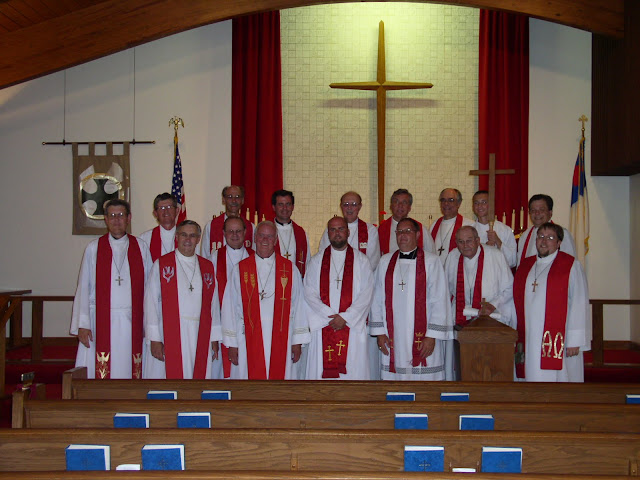 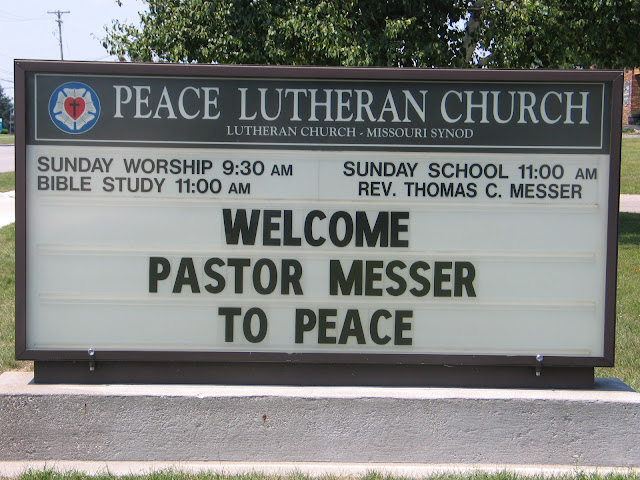 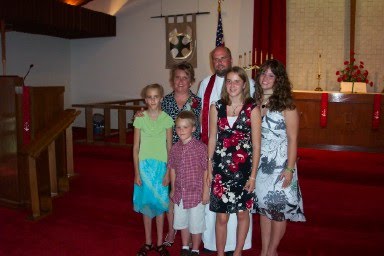 The family - my, how these rascals have grown! 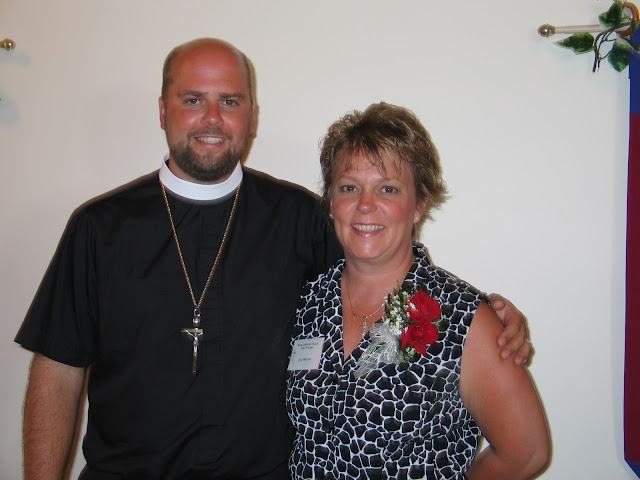 My wife, Lisa, and me (featuring my cheesy, fake smile! :) 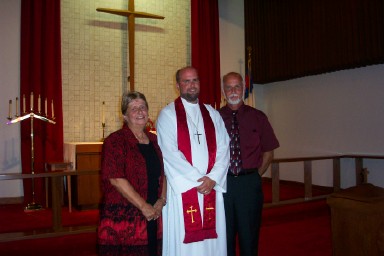 God grant you many years, Pr. Messer, in His service in the Heilige Predigtamt!

Congratulations on your time served... I don't mean it to sound like prison time... but I think you know what I mean. :)

God's blessings to you Pr. Messer. I always enjoy reading your blog and comments elsewhere.

It was one of my best birthdays ever! We have been very blessed to have you as our pastor.

Mike Carter and I celebrated your anniversary by going to the Brady Street Festival. http://bradystreet.org/categories/13-events

Congratulations... and many more years!

Congratulations on reaching the five year milestone! We just put someone into office in the neighboring parish today--such is the time of year!

That part of Michigan still feels like home, even if it has been 11 years since graduation from CMU and 15 from Mount Pleasant High. (Zion, Mt. Pleasant was my home church.) May it be your home as long as Christ so wills it!

Thanks for posting this and reminding us of the history of Peace. Our Lord surely blessed us when He sent you to us. Your service is greatly appreciated.

Thanks Luke and Carol!

Congratulations on five years! I'm pretty sure your cheesy fake smile looks better than my real smile, and definitely better than my "on camera" smile, as you already know.