AC XIV or Not? 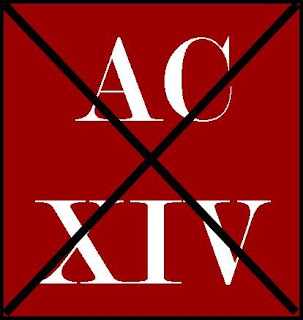 Article XIV of the Augsburg Confession (AC XIV) states: "Of Ecclesiastical Order they teach that no one should publicly teach in the Church or administer the Sacraments unless he be regularly called."

It's right there in black-and-white for all Lutherans to read. You can't miss it. Neither can you magically try to make it mean something other than what it says, although countless people have tried to do just that.

What you can do is ignore it or just strike it from the record, pretending that it either never existed or that it no longer applies to Lutherans today. That's what the LCMS did during its Convention in Wichita back in 1989. Ever since then, AC XIV has read like this in the LCMS:

"Of Ecclesiastical Order they teach that no one should publicly teach in the Church or administer the Sacraments unless he be regularly called."


AC XIV is meaningless in our synod today. It's been struck out, abolished, replaced by this:

"Of Ecclesiastical Order WE teach that no one should publicly teach in the Church or administer the Sacraments unless he be regularly called, or unless he or she is licensed to do so without a regular call by one of our Districts."

Or, to summarize it even further: "Of Ecclesiastical Order WE teach that everyone is a minister," since, let's face it, the "everyone a minister" principle of the Church Growth Movement is really what prompted our synod to abolish AC XIV, and still has a bewitching effect on those among us who continue to defend our doing away with that Article.

Now, arguments could be made to show how the LCMS has also abandoned other Articles of the Augsburg Confession, but, as far as I'm aware, AC XIV is the only one that it has *officially* discarded as meaningless. Of the other Articles that could be questioned, the LCMS still at least pretends to take them seriously and abide by them on paper, even if they have become as meaningless in practice as has AC XIV (AC V, XI, and XXIV come to mind here).

This summer's LCMS Convention will be the eighth Convention since our synod abolished AC XIV in 1989. In every Convention since then, this issue has come up in one way or another, but it's never been resolved. Evey attempt to cover up the sin of abolishing one of the Articles of our Chief Confession has been as futile as the fig leaves employed by Adam and Eve in the Garden. We've had this or that program introduced that brought hope to those who realize our synodical sin, but they've all failed. They have resulted in nothing more than adding an additional fig leaf or two. The same is true of the latest hope-inducing program, introduced into our midst at the 2007 Convention, the Specific Ministry Pastor program (SMP). It's just another fig leaf. Nothing more.

In fact, what many seem to forget, or just don't know, is that the real reason the SMP was initiated by the previous synodical administration had to do with the delusions of grandeur they had about creating 2,000 new LCMS congregations by 2017, as part of their Ablaze!(tm) program, movement, or whatever they called it. The idea was that we needed to find a way to fast-track men toward ordination, since there were going to be all these new congregations planted. These men would be under the supervision of the pastor(s) of the congregations that would plant these new congregations, or satellites, or whatever, and thus would only be ordained to be pastors in the specific contexts of these new church plants.

Of course, that has all changed now. The SMP program is much broader than that today. It has become just another alternate route among us to the Office of the Holy Ministry, and many who take this route are ordained not to serve new church plants, but to serve within existing congregations as assistant, or associate, pastors of this or that "ministry" (youth pastor, evangelism pastor, etc.). Many among us, who were not keen on the SMP program, embraced it, hoping that it would be a way to phase out the various deacon and lay ministry programs many of our districts have in place, so that we could finally restore AC XIV within our synod. But, that hasn't happened. The various deacon and lay programs many of our districts have remain in place, and are being vigorously defended by their districts, many of which passed resolutions at their district conventions last summer to commend their programs, as a sort-of warning shot across the bow of synod announcing that they won't go down without a fight.

So, here we stand on the brink of another LCMS Convention. Several overtures were submitted to address this issue, the vast majority of which resolved to rescind 1989 Res. 3-05B, which brought about the abolishing of AC XIV in our synod. In fact, only three of the fourteen or so overtures sent in on this subject resolved to affirm 1989 Res. 3-05B (those overtures were sent in by the Pacific Southwest, Northwest, and Mid-South Districts). All of this produced Resolution 4-06, "To Address Questions re Service Apart from AC XIV," which will be brought to the floor for consideration at our Convention in less than two weeks.

Unfortunately, Res. 4-06 merely resolves to catechize on this issue, study this issue, and appoint a task force to develop a plan to address this issue, which, if passed, will be reported to the 2016 Convention. This means that we will continue to live as a Lutheran synod who has abolished one of the Articles of our Chief Confession for at least another three years. But, hey, we have been living that way for twenty-four years already, so what's another three years among friends?

Seriously, I hope and pray that Res. 4-06 passes and that a plan is developed to phase out deacon and lay ministry in our synod by 2016, although I am always a bit befuddled by the necessity of task forces and years of study for issues like this, which couldn't be anymore black-and-white. I mean "Of Ecclesiastical Order they teach that no one should publicly teach in the Church or administer the Sacraments unless he be regularly called" seems pretty straight forward to me. Am I missing something?
Posted by Rev. Thomas C. Messer, SSP at 2:57 PM 1 comment: