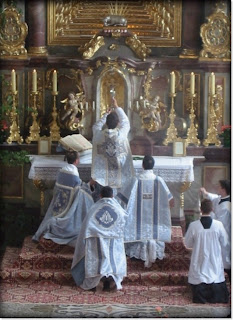 One of the most frustrating things for the 21st-century, confessional Lutheran pastor to deal with is the oft-repeated accusation that this, that, or the other thing is "too Catholic!"  Those who make these accusations really mean to say that what they're witnessing is "too Roman Catholic!"

Firstly, this charge is made by those on the outside looking in, who really haven't the first clue about what distinguishes Lutheran doctrine and practice from Roman Catholic doctrine and practice.  They see similarities between the two and conclude that they're the same.  I've heard it more times than I can remember:  "Oh, you're a Lutheran.  You're just like the Catholics, then."  This misunderstanding is certainly understandable, since such people are basing their conclusion simply upon what they see, and haven't taken a single moment to dig into matters more deeply.

Secondly, this charge is made by many life-long Lutherans who were brought up to believe that many ancient and laudable customs in the church were to be avoided because they were "Roman Catholic."  Making the sign of the cross is a case in point.  Other examples include chanting the liturgy, wearing Eucharistic vestments, elevating the Body and Blood of Christ at the Consecration, genuflecting, private confession and absolution, and observing the Feast Days of saints.  It doesn't matter for many that it can be easily proven that none of these customs originated in the Roman Catholic Church, but were already in existence long before it ever came into being.  They have been taught that these things are "Roman Catholic" and they'll hear nothing more about it, thank you very much.  I have met some life-long Lutherans in my day who are so convinced that these things are "Roman Catholic" that I am quite certain that the apostle Paul himself would not be able to convince them otherwise.

What is so frustrating about this is that the truth is so readily available to anyone who is in the habit of playing the "That's too (Roman) Catholic!" card.  A Lutheran need only read his/her copy of the Book of Concord to learn what truly distinguishes Lutherans from Roman Catholics.

What is also frustrating - and very telling - is that you almost never hear the cry, "That's too Baptist! (or Methodist, or Pentecostal, or whatever)"  The truth is, whether some want to admit it or not, that Lutherans have never been nearly as defensive concerning Protestant practices, especially since their coming to America where Protestantism has flourished.

This goes a long way toward explaining why American Lutheranism finds itself in such a mess today.  In our zeal to protect ourselves from the big, bad, wolf of Roman Catholicism, we have left ourselves unguarded from allowing Protestant influence to chart our course.  It is no surprise that we see many Lutherans mimicking the practices of Protestants today, for Lutherans have been caving in to Protestant influence for many years.  It is also no surprise to see many Lutherans making an easy transition from Lutheran congregations to Baptist, Methodist, Pentecostal, non-denominational, and other congregations, for they don't see the many major, doctrinal issues at stake.  "Protestants are our friends, after all.  We're okay, so long as we avoid Roman Catholicism."

But the truth is (brace yourselves, Lutherans!) that we share much more in common with Roman Catholics than we do with modern Protestantism.  I know, shocking, isn't it?  But, it's true, nonetheless.  The Reformation, led by Blessed Dr. Martin Luther, was not about starting a new church, or even a new "version" of the church.  It was about reforming the one, holy, catholic, and apostolic church and restoring the Gospel to the center of all the church is, says, and does.  Our Lutheran forefathers were very adamant about the fact that they were not interested in dumping the ancient customs and traditions, but were intent on reverently keeping, and religiously defending, them.  They dropped some things that were contrary to the Gospel and reformed other customs and traditions to bring them in line with the Gospel, but simply kept in place all those things that served the Gospel and the piety of Christ's Church well.

None of this is to say that we don't have major differences with the Roman Catholic Church to this day.  We do - MAJOR differences!  But, here's a newsflash for ya:  We have MAJOR differences with Protestants, too!  To think that it is okey-dokey for Lutherans to adopt Protestant practices, while avoiding anything that looks, smells, or sounds Roman Catholic, is to completely misunderstand what Lutheranism truly is.

There is a cure for that, you know.  Read and study the Book of Concord for yourself.  You might be surprised at what you learn.  If you are diligent in your study, I am confident that you will see why it is frustrating for those of us who have studied what we Lutherans believe, teach, and confess to hear people claiming that many of the beautiful, ancient, Gospel-serving, pre-Roman Catholic customs and traditions are "too (Roman) Catholic!"
Posted by Rev. Thomas C. Messer, SSP at 6:38 PM