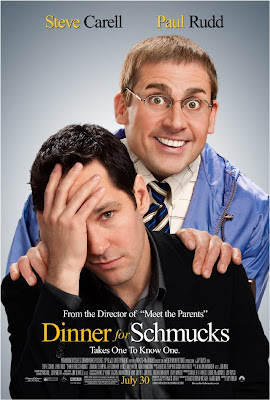 Lisa and I got out last night for a movie and dinner.  Since we were celebrating my birthday (a few days late, I know), I got to choose the movie.  That was a no-brainer for me, being the huge fan of Steve Carell that I am.  Is there a better show on television than "The Office"?  I think not.  So, the choice was, without a doubt, "Dinner for Schmucks."

I think I would have enjoyed the movie a lot more had the theater not been packed with giggling teenage girls, who seemed to lack any sense that they were not the only ones there.  But, like, whatever.  Ya know?  Anyway, be that as it may, it was a good flick.  Not the most intelligent of movies, but it's not meant to be.  It's one of those "stupid-funny" movies and it definitely accomplishes its mission.  Stupid and funny, for sure.  Steve Carell is just a master at playing the idiot, and the combination with Paul Rudd is just perfect.  Funny stuff - totally stupid, but funny!

I do wonder, though, how they get away with rating movies like this PG-13.  But, I've been wondering that for years now, and I think that particular ship has sailed.  We should just consider PG-rated movies to be PG-13, and PG-13 rated movies to be R.

After the movie, we went to dinner at a local restaurant, which turned out to be one of the worst dining experiences we've ever had.  The waitress was great.  The wine, appetizers, and salads were good.  Everything seemed to be moving along wonderfully - until we received our main courses.  Yuck!  Lisa got the deep-fried shrimp and it tasted awful - I don't even know how to describe it.  I got the New York Strip and it was, bar none, the absolute worst steak I have ever eaten in my life.  How in the world can a steak have no flavor?  I don't get it.  To describe it as bland is an understatement.  I had to smother it with A-1 just to have some semblance of flavor, and this is a big no-no in my book.  Steak should be eaten with a little salt and a lot of pepper and no sauce.  But, even A-1 couldn't save this steak.  I can't remember the last time I left half a piece of steak on my plate (don't think it's ever happened, actually).  Thank God they were out of both baked and mashed potatoes and I had to order french fries.  We ate those up like nobody's business! :)
Posted by Rev. Thomas C. Messer, SSP at 2:49 PM