Below is the excellent blog post by Fr. Larry Beane (a.k.a. Father Hollywood) I referred to yesterday during Bible Study.  You should also go to the post itself and read the comments (especially those of Fr. Beane, which are pure gold).  Pr. Wilken chose this post as his IE Blog of the Week on Friday (great choice!), which you can listen to here. 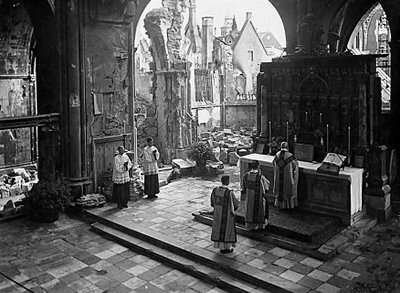 By Larry Beane
I believe one of the reasons we have "worship wars" among American Christians is that it has been a long time since we have had physical warfare on our own soil.  9-11 was close, but even that was dominated not by the theology of the cross of Christ, but rather by a sense of the national therapy of Oprah.  Consider this poignant picture above of the ruins of a bombed-out church in Germany, where amid all the chances and changes of this life, the one thing that people could hold onto is the liturgy of the Church, the Mass, the real physical communion with the real physical Lord. Notice what you don't see: entertainment.  There is no gyrating chanteuse working the microphone like a Vegas performer, a spotlight shining on a grimacing drummer, a perfectly-coifed guitarist wearing the latest fashions, or a trendy prancing made-up motivational speaker with gelled-up hair and a plastic smile emoting in overly-dramatic hushed intonations. Instead, we see a celebrant, deacon, subdeacon, and two servers, all reverently and historically vested, each stationed in his proper order, proclaiming by their very placement that no matter how unpredictable and desperate things may get in this war-torn existence, Jesus is here, week in and week out, in the midst of our pain and uncertainty.  And the Church is here, century in and century out, bearing the Good News by proclaiming Christ crucified, the eternal Word of the cross.  And even amid the rubble and missing walls and blown-out windows, the old stone edifice of the church building, even in its humiliated state, carries a reverent gravitas of which the latest and greatest multi-million-dollar "worship centers" are bereft. And at the center of it all is the chancel.  There is no stage, big screens, lasers, or sound system paraphernalia, but rather a simple but elegant book containing the liturgy and the Word of God, dignified candles flickering with the soft glow of the flames reminiscent of the Day of Pentecost and silently confessing the Son as "light of light, very God of very God."  And of course, the Holy of Holies is the stone altar, anchored like the rock of St. Peter's confession amid the gravel of a desperate world, the marble slab upon which one finds the Cornerstone, the Christ Himself in the Holy Eucharist, the mystery of the Lord's Presence for the forgiveness of sins given by means of the simple creatures of bread and wine. By contrast, "contemporary worship" is a sad and spiritually impoverished display of vulgar bourgeois suburban kitsch, a puerile frivolity that is more at home in a sterile strip mall or a vacuous night club than in the gritty real world inhabited by real people who suffer real pain and who need a real saving encounter with the real God. That is why we need real worship.
Posted by Rev. Thomas C. Messer, SSP at 5:37 PM