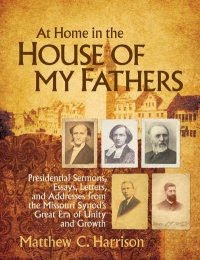 It has become a Friday morning custom for me to read a portion from the most excellent book, "At Home in the House of My Fathers", by LCMS Presidential Nominee Rev. Matthew Harrison.  This morning, I read "On Pure Doctrine for the Salvation of Souls," which was the opening sermon preached by C.F.W. Walther before the first official meeting of the Synodical Conference, held in Milwaukee July 10-16, 1872 (pp. 193-201).

I dare say that, were Walther alive today, he would be labeled by many in our midst as an "ultra-conservative purist."  He would be accused of not having a proper love for the lost, for he would not be willing to do "whatever it takes" to reach them, if doing "whatever it takes" called for the forsaking of pure doctrine in any way, shape, or form.  The mantra of many in our synod today is in agreement with the words spoken by our own synodical president, Rev. Gerald Kieschnick, at his installation in 2001 (and repeated several times since):


People, this is not a game.  Our incessant internal purification at the expense of the eternal destiny of the souls of men and women for whom Christ died must stop!

For Pres. Kieschnick and company, the commitment and desire to adhere to, and maintain, pure doctrine is seen as a stumbling block to the mission of saving lost souls.  Indeed, I have had numerous conversations with LCMS pastors and laypeople over the years, who have made it very clear that they believe that we Lutherans need to quit worrying so much about keeping our doctrine pure and start worrying more about reaching out to the lost in whatever ways necessary.  So it is that, today, there are a plethora of Lutheran pastors and congregations whose zeal for reaching the lost has come at the expense of maintaining pure doctrine.

Remarkably, even though it can be clearly seen that these pastors and congregations have forsaken pure doctrine, they believe that their actions and practices are defensible since they have created a new definition of pure doctrine, which involves nothing more than an adherence to a basic set of fundamental or essential doctrines.  They have no doubt been influenced in this regard, too, by leaders like Pres. Kieschnick, who repeatedly maintains that our synod is blissfully united in the essentials, providing, time and time again, detailed lists of what he deems to be the essential doctrines in which, in his estimation, we are united in agreement.  He almost always follows this up with statements about how our unity on these essentials is the envy of many other denominations.  Clearly, for him, and for all like him, agreement in essentials is enough, and to wrangle over specifics, or to strive for purity in specifics, is not only unnecessary, but detrimental to reaching lost souls for Jesus.

Not so with Walther.  Not even close.  Listen to him.  Here is a portion of the most excellent sermon he preached - a sermon that still needs to be preached and heard in our midst today (it's a lengthy quote, I know, but you would be most edified to take the time to read it):


As you know, my brethren, it is a common saying in our time that the continual urging of the doctrine is a most pernicious tendency, only hindering, yea, destroying the kingdom of God.  People say, "Instead of disputing so much about the doctrine, you ought rather to think of taking care of the souls and of leading them to Christ."  But all who speak this way certainly do not know what they say and what they do.  As it would be folly to chide the tiller of the ground for his diligence to obtain good seed, and to demand that he should be eager only to obtain good fruit, so it would be folly to chide those that take heed unto the doctrine above all things, and to demand of them that they should rather endeavor only to save souls.  For as the tiller of the ground must be eager to obtain good seed above all things, if he wishes to reap good fruit, so must the Church care for sound doctrine above all things, if she wishes to save souls.

However, many say, "We acknowledge indeed that for these reasons, it is certainly necessary to cling firmly to those great general truths upon which the salvation of souls depends.  But should not liberty be granted to everyone in reference to all other doctrines?  What can the result of controversy about subordinate doctrines be, but that the body of Christ is torn and the work of the salvation of souls hindered?"  But also all those that speak this way certainly do not know what they say and what they do.  For the holy apostle does not say in our text, "Keep a close watch on the chief doctrines," but "Keep a close watch on the doctrine," that is, unto everything that is taught in the Word of God.  "For," he adds, "by so doing you will save both yourself and your hearers."  For god has not revealed only this and that doctrine but His whole Word for the salvation of men.  "Thy testimonies," says David, "are very sure" [Psalm 93:5 KJV], not only this or that testimony.  Therefore also the great apostle of the Gentiles testifies:  "All Scripture is breathed out by God and profitable for teaching, for reproof, for correction, and for training in righteousness, that the man of God may be competent, equipped for ever good work" [2 Timothy 3:16-17]; and in another passage he declares that only therefore he is "pure from the blood of men," because "I did not shrink from declaring to you anything that was profitable" and "I did not shrink from declaring to you the whole counsel of God" [Acts 20:27].  And finally, Christ Himself says, "Man shall not live by bread alone, but by every word that comes from the mouth of God" [Matthew 4:4].  Behold, in every word of God, therefore, life is enclosed as in a germ, namely, temporal as well as eternal life.  The Word of God is an immensely rich storeroom, filled with manifold inviting meats for mankind, living without God and without hope.  When his hour comes, God invites one man by this meat and the other man by that one.  Who are we, then, to dare to despise the riches of God's goodness and to sacrifice even a single one of His saving words?

Finally, add to this the following:  As every doctrine of the Word of God is a heavenly seed of regeneration for everlasting life, so on the contrary, every human doctrine is, in matters of salvation, a hellish seed of satanic birth to everlasting death.  Alas!  Many a soul has been led by a single false doctrine forever into a wrong way to eternity, by a single false consolation forever to a false hope of salvation, by a single false threatening, warning, and reproof forever to a false fear and to perfect despair, and thus, finally, to the loss of souls and salvation!

Scary how it almost seems as though Walther is addressing our synod today in 2010, isn't it?  Actually, he is, and we would do well to listen to him!
Posted by Rev. Thomas C. Messer, SSP at 2:12 PM

If our current (and soon to be replaced) Synodical President were less "seeker-sensitive" and focused on being "sinner-sensitive" our Synod would have more missionaries and less consultants.
Peace,
Dennis