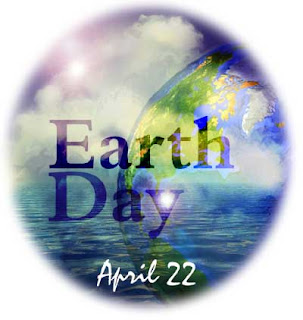 Call me crazy, superstitious, backwards, ignorant, or whatever else you will - I believe in the Triune God who reveals Himself to us in the Bible.  I believe that He created the heavens and the earth.  I even believe that He did so in six, literal days, as revealed in Genesis.  I further believe that He has always been, and remains, firmly in control of the universe.  I believe Him when He tells us that the earth will be here until the Last Day, when Christ returns in great glory for the final judgment, and to usher in the new heavens and new earth - the new creation which will take the place of the old, and which will be the eternal dwelling place of all the saints and holy angels with their Creator and Lord.

As I said, call me crazy, etc., but that's what I believe.  And, because I believe that, I'm not all that concerned with "Mother Earth" and "her environment."  The "religion" of "environmentalism" is a religion that adheres to several tenets that are in stark contradiction to the Christian religion.  Its popular "preachers" (the Al Gores, Oprah Winfreys, Bill Mahrs, etc.) proclaim a message that puts sinful human beings in the place of God, making it their responsibility to care for, sustain, and even save our planet.  The "prophets" of this "religion" are the scientists who work from the pre-conceived notion that there is no God and that Darwin's theory of evolution is a fact.  They provide data, based on these pre-conceived notions, which become the "sacred writings" from which these "preachers" proclaim their message to the world.

Last week, the "high feast day" of this "religion" was observed.  That is, of course, "Earth Day."  This was the fortieth anniversary of this "sacred festival," and the whole world joined in the celebration ("Earth Day" was begun in 1970 here in the U.S., but went international in 1990).  Actually, though, this "high feast day" is not all that celebratory in nature.  It's really a day of fear-mongering and guilt-laden reminders to the human race about its responsibility to quit killing its "mother" and to become active in the cause of healing, and saving, her.  "Love Your Mother - Earth"; "Save the Planet"; "Show You Care - Hug a Tree"; "Go Green - Stop Global Warming"; "Be Responsible:  Recycle and Restore!"; and so forth, are the "sermons" preached on this "high feast day."  And the message comes through loudly and clearly:  If we don't take action, we'll soon have no place to live!

The "religion" of "environmentalism" flows from godlessness.  It is crassly narcissistic.  To think that we human beings are both the cause and the cure for the supposed peril of our planet is the height of narcissism and leaves absolutely no room for the God who created all things.  Not only that, but "environmentalism" lacks the consistency to sustain it as a viable "religion" worth the time for anyone to take very seriously, even though many actually do.  While the core message is always there, namely that we human beings must work together to save our planet, the threat and suggested action required to eliminate the threat is always changing.

When I was a young chap, the threat was over-population.  If we didn't do something about that, by the time the 21st century rolled around, our planet would be so overrun that it couldn't possibly survive our existence.  That, of course, proved to be a myth of epic proportions.  Then there was the insistence that we were destroying our forests and would soon run out of trees, which would, of course, mean our certain extinction, since we can't breathe without trees.  Then we were destroying the Ozone layer because of our pollution.  Remember that?  When I was a teenager, this was a HUGE deal.  We were melting the Ozone layer away and, if we kept that up, we would all soon fry.  Enter the Greenhouse Effect, which is still promoted as something to fear and resolve, and has supposedly led to the "greatest peril our planet has ever faced" (according to the Official Earth Day 2010 Campaign), namely "Global Warming" (a.k.a. "Climate Change").  A few months back, in what has become known as "Climate-Gate," it was revealed that many scientists were "cooking the books," so to speak, in order to sell "Global Warming" to the world.  But, that hasn't stopped the advancement of the promotion of this latest threat in the least.  It's everywhere.  It's constantly in the news; it's entrenched in our politics; it's supported and promoted by Hollywood, and so forth.  To speak out against it, even if you are a reputable scientist who has the data to back up your opposition, is to be cast aside as an ignorant baffoon, not worth listening to (kinda like when you speak out against the theory of evolution).  Never mind the fact that it has been proven that our planet has gone through cyclical periods of both cooling and warming throughout history, Global Warming is something new that is solely caused by us and must be solely solved by us.  It's the latest threat which is sure to keep the "religion" of "environmentalism" thriving in the years to come (which has a lot to do with the amount of money to be made in its promotion and acceptance - just sayin').

Sadly, many Christians have been bewitched into believing that they can adhere to Christianity and "environmentalism" at one and the same time.  But, this is quite impossible, since they are wholly incompatible.  Either you believe in the Triune God who created all things, continues to sustain all things, and promises to sustain all things until the Last Day, or you don't.  And, while the "religion" of "environmentalism" will happily allow for you to believe in whatever "god" you choose to believe in, it requires that you believe that your "god" is not in control.  In other words, you are free to be "Christian," so long as you don't actually believe that the Christian God is in control of our universe, since, well, that would most definitely contradict the basic tenets of "environmentalism."

None of this means that we Christians shouldn't be good stewards of God's creation.  But, our motivation for doing so must never be rooted in the vain, ridiculous idea that we are somehow participating in the saving of our planet.  We try not to pollute or litter not because we believe our doing so will result in our planet's destruction, but rather because it makes God's creation ugly.  We don't recycle because we believe that we are going to run out of natural resources, but because it is a more efficient use of those resources.  We don't plant trees because we believe it is necessary for our survival, but because our God has given us the ability to do so and it is good for us to replenish the resources we use.  And so on.

The point is that we should care for God's creation as we are able.  He commands us to do no less.  But, we do so always recognizing that He is in control of all things and never out of fear that our existence depends upon us.  We are not alone.  We are not in control.  We are neither destroying our planet nor would we have the capacity to save it if we were.  We have no need to fear Global Warming or any future threat imagined and promoted by the "preachers" of "environmentalism."  God is able to handle things just fine without us.  We will be here until the Last Day when Christ returns.  God promises so, and He has shown time and time again that He is always faithful to His promises.

With all that said, here's a video for your enjoyment, which I stumbled upon visiting Pr. Randy Asburry's blog: