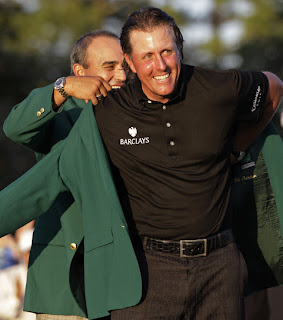 This year's Masters was one of the best in recent memory.  So many story lines to follow.  Tiger got most of the press coverage, as usual, returning to golf after his five month layoff due to his sex scandal.  Say what you will about the dude, the bottom line is that he can flat out play the game.  I can't think of another professional golfer who could be away from the game for nearly half a year and be in contention (he finished tied for fourth at -11) immediately upon his return, and that at a major championship.  If we could just get the guy to quit taking the Lord's Name in vain after hitting a bad shot, it would be far more enjoyable to watch him display the gifts given him by the Lord in whom he doesn't believe.  I sent him a message suggesting that instead of yelling out, "G-D" or "J-C," he think about yelling, "Oh, Buddha!"  I haven't heard back from him as of yet; I'll keep you posted if I do.

Then there was Freddy (Couples, that is, for those of you who erroneously believe golf is a game not worth following).  Man, I was rooting for him the whole way.  The "old" guy (he's 50) still has plenty of game, and is still as fun to watch as he was in his prime.  He had a legitimate shot at winning this thing this year, but, alas, it wasn't meant to be.  Still, Freddy's quiet demeanor and laid back approach to the game is a privilege to witness.  He encapsulates the best of what this great game is all about.  A true class act on and off the course; a true ambassador for the game if ever there was one.  Freddy ended up finishing in 6th place at -9.

And what about the final round charge of A.K. (that's Anthony Kim)!  Wow!  Talk about a young player who is fun to watch, especially when he gets hot like today.  Last year, Kim set a Masters record with eleven birdies in one round; this year he went low on the final day, heating up on the back nine to turn in an impressive 7-under for the round and posting the score to beat early at -12.  It turned out to be too little, too late, but you gotta give the kid props for making the surge he did.  At 25-years-old, Kim will be around for a while and will surely have many more opportunities to don the coveted green jacket.

We could also talk about the guys from across the pond who made this year's Masters exciting - Lee Westwood and Ian Poulter.  While Poulter fell out of contention on Saturday, Westwood, who has been so close to winning a major the last four starts, battled till the end.  He ended up coming in at a distant second, three shots back, when it was all said and done, but he was right in there putting pressure on the leader, Phil Mickelson, on the 17th green, sinking a birdie putt which forced Mickelson to convert a lengthy par putt to maintain a two-stroke lead heading to the 18th tee.  If Lefty misses that putt, it's anyone's game.

But, for all the other story lines that made this year's Masters one for the ages, the best of all was the story of Lefty, who prevailed to earn his third green jacket at Augusta.  The backdrop to his story makes his victory all the more sweet.  His wife, Amy, has been struggling with breast cancer for over a year now, and it has been a very difficult battle that is long from over.  Add to that the fact that Mickelson's mother, Mary, was also diagnosed with cancer a while back.  Lefty and his family have been through so much this past year.  He has taken a lot of time off from the game to be with his wife and mother these past several months and, coming into the Masters, his game was pretty much in shambles.  No one, including myself, gave him much of a chance to contend, let alone win.  I mean, it was a possibility, to be sure, but the odds were not good.  But, he proved us all wrong and put together a week at the Masters that will surely be talked about for generations to come.

His approach shot at the par-5 13th was one of the most remarkable golf shots ever.  In the pine straw, with a couple of trees in front of him, the smart play was to punch the ball out and lay up.  But, that's just not how Lefty plays the game.  Never has been, and probably never will be.  Lefty has always gone for it, and often has paid the price for doing so.  But, when he goes for it and converts, as he did today, it is pure joy to witness.  He knocked that ball from the pine straw, through the trees, barely carrying the creek guarding the green, to within ten feet for an eagle opportunity.  As he was swinging, I was thinking, "Oh no, Lefty, don't do it!"  But, he did it, and the result was nothing short of amazing.  He ended up missing the eagle putt, which probably would have put things away at that point, but converted the birdie and kept the momentum going, which would lead him to his third Masters Championship.

What a truly "feel-good" story!  I couldn't be happier for Lefty and family.  Lefty is a class act, on and off the course, and always has been.  He is not one who basks in the spotlight, but has always come off humble and appreciative of the gifts he's been given.  I've always been a fan, but even more so now.  Walking off the 18th green, after sinking a birdie putt he didn't need to win, he immediately headed to Amy and embraced her, with tears running down his cheeks (it was at that time that I think I got something stuck in my eyes as they began to water for some reason, too).  An emotional victory.  A tremendous victory.  A victory for the ages.  Congratulations, Lefty!  Well deserved and well earned!

Here's video of that remarkable shot at #13: