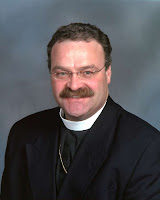 The official notice of nominations for the LCMS Praesidium has been released.  For the Office of President, Rev. Matt Harrison received the most nominations by far, nearly twice as many as incumbent Rev. Gerald Kieschnick.  Not only does Rev. Harrison have a chance this summer, but these numbers seem to indicate that he's the front-runner, and that is GREAT NEWS for the cause of confessional Lutheranism in the LCMS!  Here's how the numbers pan out:

WOW!  The hope of this confessional Lutheran for our synod is renewed.  I pray that these numbers hold up this summer.  While these numbers make no assurance that things will pan out accordingly this summer, the indication here seems to be that the majority in our synod desire a change of leadership.  I hope that bears itself out at the Convention.  It is time, Missouri!  IT IS TIME!
Posted by Rev. Thomas C. Messer, SSP at 12:24 PM

Rejoice in hope, be patient in tribulation, be constant in prayer. Rom 12:12