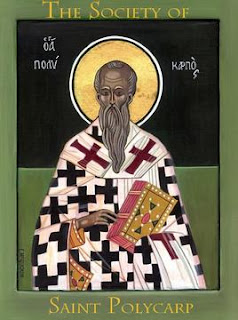 I received word today from Rev. Fr. Larry Beane, Dean of the Society of St. Polycarp, that I had been welcomed into membership in this beloved brotherhood.  I am honored to be a part of this Society.  In a day and age when being Lutheran is defined in a variety of ways, I find myself drawn toward those who refuse to define Lutheranism beyond how our very own Confessions define it.  To belong to a brotherhood of Lutherans who take being Lutheran seriously and commit themselves to a common rule is entirely appealing to me, since I, too, am "committed to the confessional, liturgical, sacramental, and spiritual renewal of the Church of the Augsburg Confession" (Introduction/Preamble to the Rule of SSP).  While I don't yet know all the brothers who belong to the Society, those I do know are brothers for whom I have long had the deepest respect and admiration, including Fr. Beane, our Dean.  These are men who are faithful to, and remain steadfast in, their confession of the faith, and, as I said, I'm honored to be counted among them.  What follows is the Rule of the Society, to which all members voluntarily commit themselves:


The Rule of the Society of St. Polycarp


ABOUT ST. POLYCARP
Borne c. A.D. 69
Died c. A.D. 155
Polycarp was the Bishop of Smyrna, modern day Izmir, Turkey. Before dying as a martyr, Polycarp was recognized a leader by the Christians in Asia Minor. Because of his position in the church, the death of Polycarp is one of the first and best recorded and documented deaths of a Christian martyr.

Polycarp was brought to the faith by the Apostle John. He also knew the Apostle Paul. The Apostle John, the only Disciple of Jesus to die a natural death, died at an advanced age at Ephesus c. A.D. 100 bringing an end to the "Age of the Apostles" considered to run from A.D. 33, with Jesus’ Ascension into Heaven after his death and Resurrection, to A.D. 100, at John’s death.

Polycarp belonged to the generation of church leaders who followed and had known and been taught by the Apostles themselves. Many second century Christians looked to Polycarp as a living link to the Apostles. One of these was Polycarp’s disciple Irenaeus.  St. Ignatius of Antioch was his friend and contemporary.

During his lifetime, Polycarp wrote, taught and fought for the faith, defending it against the many heresies that tried to creep in with the passing of the Apostles.
He was martyred on Easter Eve.
Posted by Rev. Thomas C. Messer, SSP at 11:49 PM

First, it's "Beane". I never got the fun of the rhyme, though, until you spelled it that way: "Dean Beane"! *laugh*

Second, a question. You wrote, "I find myself drawn toward those who refuse to define Lutheranism beyond how our very own Confessions define it." What does this mean? Who does this?

Lutheranism is defined beyond its self-definition in the Confessions in any number of ways. One that comes to mind immediately is how, by both practice and teaching, many parish pastors, churches, full time elected bureaucrats, and seminary instructors stand against the traditional Lutheran view of liturgical innovation, embedded as that view is in the very Confessions to which they once vowed subscription.

What do you mean I misspelled the Dean's name? Go back and read it again and you'll clearly see that it is spelled correctly! :) (Thank God for the edit feature).

Secondly, I'm referring to those who treat our Lutheran Confessions as nice, historic documents, which contain some general truths, but do not view them as continuing to be fully definitive regarding what Lutherans believe, teach, confess, and practice. I see this play itself out in a number of ways among Lutheran pastors today. For example, I had a pastor long ago who would just come out and say, "The Lutheran Confessions do a good job of defining some crucial doctrines in the 16th century context, but they don't speak to many of the issues we face in the 20th century." Another example: Many LCMS pastors I know believe they can adopt and employ the practices of those whom our very own Confessions condemn, because they conveniently interpret everything our Confessions say about worship contextually. Along these lines, many Lutheran pastors wrongly pit the sola Scriptura principle against our Confessions, saying things like, "Don't tell me what our Confessions say about this. Show me what Holy Scripture says," as if our Confessions are not the correct exposition of Holy Scripture they are.

Thus, I am drawn toward those who continue to see our Confessions as definitive of Lutheranism and take seriously their ordination vows to perform all their duties in accord with these Confessions.

Thanks for the welcome, Fr. Uttenreither!

Congratulations! I also follow Father Hollywood's blog and wonder if you'll also have to read up on Austrian Economics? Just joking, once again congrats!

Thanks, Dave. I, too, follow Father Hollywood's most excellent blog, but am thankful that having an understanding of some of the political and economic items he posts there (which are always interesting) is not a pre-requisite for membership in SSP! :)