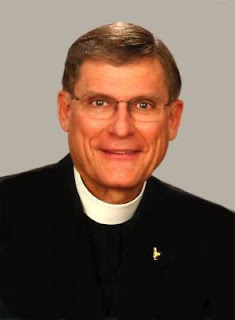 Say what you will about LCMS President Rev. Gerald Kieschnick, there is one thing for certain:  He is a great politician.  You gotta give the man his props in this area.  He knows what to say and when and how to say it.  Like all great politicians, he has mastered the art of spin and has the uncanny ability to deflect criticism away from himself and back onto his critics.  Anyone who has paid even a little attention to the way in which Pres. Kieschnick has carried himself these last nine years must admit that he is a political genius.  He has been careful to maintain plausible deniability regarding many controversial happenings under his watch, always managing to keep himself out of the eye of the storm, so to speak.

So it is that in the latest "President's Leadership News" (the fancy, colorful insert included in the Reporter), we see Pres. Kieschnick's political prowess at its best, especially in the section where he answers a few questions regarding the Blue Ribbon Task Force on Synod Structure and Governance, whose proposals have now been drafted into resolutions to be presented and voted upon at the LCMS National Convention next month.  All three of the answers Pres. Kieschnick provides to the three questions in this section are politically captivating, but the third Q and A is simply marvelous.  Just read for yourself:


Q:  I've heard that task force recommendations are really just an effort to concentrate power in the Office of the President of the Synod.  Is that true?

A:  No.  Nothing could be further from the truth.  For five years, task force members have addressed organizational and structural challenges in our Synod - unnecessary bureaucracy, lack of coordination, ambiguous supervisory relationships, inequitable representation, inefficient organization, insufficient accountability, etc.  They have sought and responded to feedback from convention delegates and other leaders.  Approval of the recommendations will streamline the operations of the national Synod and reduce or even eliminate the "silo" effect that currently stymies cross-pollination and necessary coordination of efforts and resources.

Now, come on, you have to admit it - this is genius!  First of all, note the phrase in the question, "just an effort to concentrate power."  Talk about a softball!  Of course Pres. Kieshnick can adamantly respond with a resounding, "No.  Nothing could be further from the truth."  But, who in the world has ever said that the task force recommendations are "JUST an effort to concentrate power in the Presidential Office"?  To be sure, there have been a great many who have noted that the adoption of the task force proposals would, in fact, result in a further concentration of power in the office of the synodical president.  Heck, even outside consultants with no dog in this fight have noted this.  But, having the question phrased the way it is here allows for Pres. Kieschnick to cleverly avoid having to address the whole centralization of power issue at all.  Brilliant!

But, there is more here than meets the eye.  This is politics at its best, folks.  This question and answer is provided in this specific way by Pres. Kieschnick for a specific purpose, and that purpose is to convince the people in our synod, including the delegates who will be voting on these proposals, to simply ignore any talk about these proposals resulting in further concentration of power in his office.  Rather, they should direct their attention toward the fact that this task force has been working hard for five years in the attempt to address a whole host of issues which currently stymie our structure and governance.  Like a great politician, Pres. Kieschnick manages to completely avoid the heart of the question to which he is responding, which, as noted, is helped along by the phrasing of the question.  Again, brilliant!

This is a politician we are talking about. He wears teflon in the same manner Bill Clinton does ;)

I am confident he could weasel his way out of the reworded question.

And that's one reason why we need a new president.