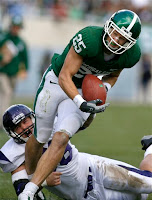 Don't look now, but Sparty has put three wins together and plays undefeated Iowa next Saturday for first place in the Big Ten. Earlier today, they defeated Northwestern, 24-14, and WR Blair White (pictured to the left) had a career day, catching 12 balls for 186 yards and two touchdowns. I really like the way the boys are playing right now, and am thrilled at how they have bounced back after dropping three straight earlier in the season. Now they have put themselves in a position to control their own destiny in the Big Ten. Who would've thunk it a month ago? Well, me, but who else? :)  Go Green! Go White!
Posted by Rev. Thomas C. Messer, SSP at 6:32 PM