The Liturgical Seminar I attended in Kewanee, IL was most excellent.  It was hosted by Rev. Dr. Burnell Eckardt at St. Paul's Lutheran Church.  Here's a pic of St. Paul's beautiful sanctuary: 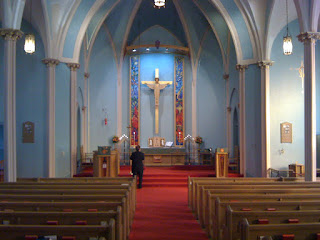 The conference theme was "Not a Matter of Indifferent Things" (i.e. the Divine Liturgy of the Church is not a matter of indifferent things, as many Lutherans falsely claim today).  The conference began with Holy Mass at 9:30 a.m. on Monday morning, which was absolutely beautiful.  I cherish those times when I am able to sit in the pew, participate in the divine liturgy, and receive the Lord's blessed Gifts, but even more so when I am in the midst of so many brothers who love the reverence of the liturgy in the Lord's House as much as I do and for whom I have a great deal of respect and admiration.  It is simply heavenly.  And, Pr. Eckardt, who served as Celebrant and Preacher, delivered Jesus to us from pulpit and altar in a most faithful and edifying way.

After Holy Mass, the first session of the conference took place.  The format was a panel discussion.  Pr. Eckardt served as questioner and moderator to the panel, which consisted of Pr. Heath Curtis, Pr. Richard Stuckwisch, and Pr. David Petersen.  I really like this format.  Those on the panel are given the opportunity to answer the questions asked of them and then it is opened up to the floor for discussion.  It offers the opportunity for a lively exchange of thoughts and ideas to take place, which is something that is woefully missing at those conferences where the format consists of a speaker reading a paper to the attendees.

All three of the esteemed panelists offered valuable insights concerning the topic at hand, as did many in attendance, including the likes of Pr. William Weedon, Pr. Ben Ball, and Pr. Mark Braden.

After the first session, we prayed the Office of Sext at Noon and then enjoyed a fantastic lunch.  The afternoon session brought more insights from the panel and the floor.  One of the things I appreciated most was the consensus among the panelists and really everyone in attendance that those of us who love the divine liturgy and seek to practice it reverently share a common confession of the faith, even though there may be slight variations in the way we conduct the Service.  In other words, the differences among us are not really differences, but fall in the realm of true adiaphora (those things neither commanded nor forbidden in God's Word).  There is a false charge hurled against us far too often, especially in the blogosphere, that we are legalistic about the divine liturgy and contend that if everyone does not do things exactly as we do, they are not being faithful.  This is simply untrue, and really rather absurd.  That we love to discuss the divine liturgy and contend for what we believe to be the best practices does not mean that we fail to recognize that there can be legitimate differences among us.  What is most important is not that we dot every "i" and cross every "t" in exactly the same manner, but that we share a common confession of the faith and the same theology of worship, which recognizes that we are in the Lord's House, not ours, where reverence, formality, and awe are in order, not flippancy, informality, and fun, and where we come as beggars to receive the Gifts of forgiveness, life, and salvation we so desperately need from the gracious hand of our Lord, who is really, truly, and most certainly present among us when we gather in His Name around His Holy Word and Sacraments.

After the afternoon session was concluded, we prayed the Office of None.  Then, unfortunately, several brothers had to head back home, but those of us who remained met back at St. Paul's for dinner, which consisted of the tasty leftovers from the Oktoberfest the day before (brats and beer - is there a better combo?).  While the whole conference was wonderful, this may have been the highlight for me, not because of the brats and beer, but because I was blessed to sit with Pr. Stuckwisch and talk at length with him.  Wow!  What a faithful man of God.  Just love him!

Then, after dinner, Pr. Eckardt and his lovely wife invited us into their home and we talked theology for the remainder of the evening over "Lutheran" beverages, and with Eric Clapton playing in the background.  I'm thinking it doesn't get much better than that. :)  It was a ton of fun to sit and converse with these faithful brothers.  Here's a few pics: 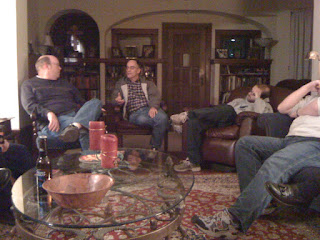 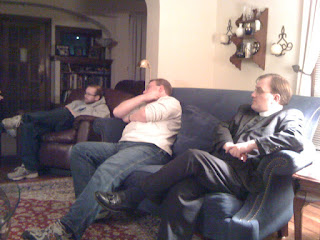 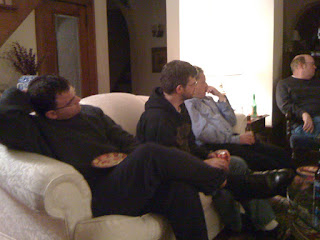 Tuesday began with Holy Mass at 9:00 a.m.  Another beautiful Service.  Then, we met in a round-table format for more edifying discussion.  We broke for the Office of Sext at Noon and then headed to the local Mexican restaurant for lunch.  We gathered back at the church for more round-table discussion, which was very interesting, indeed (more on this in a future post), and then ended the conference with the Office of None at 3:15 p.m.

It was, as I said, a most excellent conference.  It afforded me not only with a much needed opportunity for a little getaway, but, more importantly, with the blessing and privilege of joining in the mutual consolation and conversation of the brethren.  I'll flesh out a few of the things that were discussed in more detail in future posts.
Posted by Rev. Thomas C. Messer, SSP at 11:45 AM