ULC to be Sold (or, Synodocat Strikes Again!) 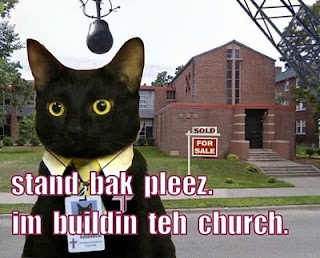 Back in April, Pr. David Kind and the members he serves at University Lutheran Chapel (ULC), located on the campus of the University of Minnesota, learned that the "Campus Ministry Property Task Force" of the Minnesota South District (MNS) had formulated a plan to sell the ULC property (along with the property at Mankato State University).  The plan was formulated behind closed doors, as neither Pr. Kind nor representatives from the ULC congregation were privy to its development, even though they were promised that they would be.  When they learned of the plan, they brought it to light and began a "Save ULC" campaign.  Oh yeah, an important detail not to be missed is the fact that the plan was unveiled on Holy Tuesday, which brought back many eerie memories for those of us who were shocked and dismayed at the sudden cancellation of "Issues, Etc." on Holy Tuesday a few years back.  You can read more about this in a blog post I put up here back in April.

In May, the MNS Board of Directors (BoD) passed a resolution to have the District Treasurer hire a commercial real estate broker to determine the true market value of the ULC property and report back to the BoD, and to have the congregation at ULC research its ability to purchase the property from the MNS at the fair market value, which they currently rent.  The fact that this property was GIVEN by generous donors so that there would be a congregation located on the campus of the University of Minnesota, where students and Lutherans in the area could receive the gracious gifts our Lord delivers via His Holy Word and Sacraments, seemed to be lost on the MNS BoD.  I mean, those faithful donors did not GIVE to this cause as a real estate investment, but to support the Ministry and Mission of Christ's Church.  But, whatever.  Fine.  If ULC needed to raise the money to purchase the property that was, again, GIVEN, they would go to work at doing so.  And so, they did.  They initiated a campaign to raise the money for this purpose.

But, alas, it matters not.  The MNS BoD is seizing on the opportunity to cash in now.  They have a developer interested in the land (that was GIVEN by generous donors - wait, did I already mention that?!) and believe they can sell it for $3.2 million, so the beautiful chapel where our Lord has served His sheep from font, pulpit, and altar will just have to be demolished, and Pr. Kind and those he serves will just have to find someplace else to gather in the Name of our Lord.

How are such decisions reached, you ask?  In the same manner the infamous "plan" was unveiled - behind closed doors.  The president of the congregation at ULC tried to attend the MNS BoD meeting yesterday, but the BoD immediately went into Executive Session.  "Um, yeah, we're going to be talking about the future of your congregation and, like, you know, we don't want you there to hear what we have to say, because, like, we're going to have to make important business decisions that, like, you probably won't be too hip on, so, you know, you're not invited."

How is it that Pr. Kind and the members he serves are informed of the decision made by the BoD to sell the property?  By an email sent to Pr. Kind by MNS District President Lane Seitz at 5 a.m. this morning.  Yeah, that's right.  An email.  At 5 a.m.  "Um, yeah, we're going to need you to go ahead and start making other arrangements soon, because, um, we've decided to go ahead and sell the property where you're located.  Um, yeah."  How utterly cowardly and, again, unchurchly.  So much so that if a District President doesn't understand how cowardly and unchurchly this is, he really shouldn't be serving as a District President.  But, I digress.

It has been pointed out that there is still hope for ULC, since the resolution passed yesterday (which you can read here) by the MNS BoD was to sell the property by the end of the calendar year for no less than $3.2 million, but not to a specific developer/entity.  In other words, this is not a done deal and the ULC could raise the $3.2 million and make an offer to purchase the property (that was GIVEN!).  But, the writing on the wall sure seems to indicate that there is a developer already waiting in the wings to purchase the property.  And so, it sounds to me like the resolution crafted in "Executive Session" by the BoD was intended to be vague, so that when the District Treasurer, who, according to the same resolution now has the power to broker a deal that meets the requirements of the resolution without further BoD approval, makes the deal, it can be said, "Well, we gave you folks at ULC a chance to make an offer, but you couldn't come up with the $3.2 million fast enough, so we had to take this other deal."  I know, I know, I'm not putting the best construction on things.  Yeah, well, the construction I am putting on things is based on how things have been done to this point, right up to the "Executive Session" yesterday and 5 a.m. email this morning.

This whole fiasco is beyond disappointing.  It is downright disgusting.  A thriving congregation and campus ministry should not have to endure such shenanigans.  They should be supported and encouraged, not threatened and discouraged.  And, since the MNS District Treasurer made clear at the District's Pastor's Conference in May that the District was not in a financial crisis, this move on the part of the BoD is all the more disgusting, since we are left to conclude that this has more to do with opposition to the "style" of ministry being done at ULC right now - you know, that nasty traditional stuff, what with the Holy Word and Sacraments and all - than with money.  Indeed, the plan for campus ministry imagined by the "Campus Ministry Task Force" of the MNS District revealed back in April was one of those non-Lutheran, "missional" things, where students become "missionaries" to "reach the lost" and "win people for Jesus" - you know, like the modern "evangelicals" do things.  Um, students are not missionaries.  They are students.  Campus Ministry is not something for them to do, but something our Lord does for them.  Really, this is all basic stuff.  That those who call themselves Lutherans do not realize this is as absurd as it is amazing.  But, that they are willing to sell the property where congregants and students have been, and continue to be, extremely well served by our Lord is evidence that they don't get it.

But, enough.  I would go on, but I've probably already said too much and am afraid of what I might say if I continue on.  For more information on this ridiculous fiasco, you can visit the ULC website (where there is an option to donate to the cause of saving the chapel), or read posts on the Steadfast site here and here.

Someone on facebook mentioned that the whole "Executive Session" thing reminded them of the scene from "The Godfather" below.  I concur.

It is readily apparent we have "old yeast" lurking in our household which needs to be cleansed.
Pax,
Dennis