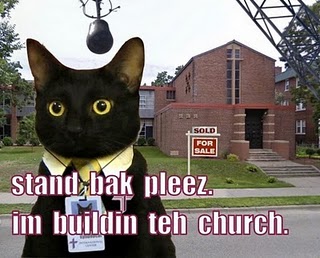 No wonder no one from the MNS District BoD could be reached for comment since they voted unanimously (remember that, would ya - UNANIMOUSLY!) to list the ULC property for sale two weeks ago.  They already had themselves an agreement in the bag, as evidenced by the notification ULC received from the District Treasurer today that a purchase agreement was executed with Doran Development, LLC.  That purchase agreement was executed FIVE DAYS AGO, on September 23, just 10 DAYS AFTER the resolution was passed UNANIMOUSLY to list the property for sale.  The fact that the pastor and congregants at ULC were not notified of this executed purchase agreement for five days is just the latest unchurchly, unChristian move on behalf of this BoD, which is made up of Lutheran pastors and laity.  There have been many such moves along the way in this long, sad saga - Pr. Kind and ULC not being informed about the formation of the Campus Ministry Task Force way back when, being locked out of the conversation and decision-making time and again, as these Lutherans thought it proper Christian behavior to enter into Executive Sessions, rather than deal with their brothers and sisters in Christ face-to-face, the notification by District President Seitz given to Pr. Kind in a 5 a.m. email the day after the BoD passed the UNANIMOUS decision to list the property, and the hiding and unwillingness to comment these last two weeks.  The whole thing, from beginning to end, has been handled not like Christians should handle things, but rather as if these Christians were nothing more than a corporate board, representing a secular business.

Also, it has been reported that President Harrison requested a meeting with the MNS BoD before they made any more decisions, but it seems that, with this action, they have thumbed their noses at him and went ahead with their plans.  I guess even the Synodical president does not merit their respect and consideration.

Take a look at the resolution and the memorandum linked above.  Is there any evidence in either of these documents that they were produced by Christians?  They just read all legal- and business-like.  But, that really gets at the heart of the problem here, as Pr. Kind mentioned in an interview on Issues, Etc. a couple of days ago, namely that there is a difference in theology evident here.  The members of the MNS BoD have bought into a different theology, one that is foreign to our Lutheran theology, which is evidenced not only by their actions throughout this tragedy, but by the grand plans they have for the future of campus ministry in their District, which will involve raising up students to be "ministers/missionaries," so that they can, you know, carry out the so-called Great Commission, because we all know that it is fulfilled when students "share their faith" (you know, "make Gospel contacts," and all that jazz) with other students.  Who needs a chapel with a pastor sent by Christ to serve the Word and Sacraments?  That just ain't "missional" enough.  We need to come up with a strategy, produce some pie charts, focus on the numbers, create a new bureaucratic position, sell out our brothers and sisters in Christ, and really get to the business of saving souls for Jesus.  We'll watch a few "Campus Ministry videos," consult a few "consultants," do some super-duper demographics studies, and come up with a new and improved "missional" scheme.  And, in this "missional" scheme, the end justifies the means, so if there are a few casualties along the way, even if they're "friendly casualties," so be it.  A chapel where our Holy Lord has visited/continues to visit His people becomes nothing more than an asset that can be sold away in this "missional" scheme, and the fact that this so-called "asset" was GIVEN by the faithful so that Christ would be Present with His Holy Word and Sacraments on the University of Minnesota campus is a point lost on those so focused on this scheme.  I guess what I posted on my Facebook page a few days back is true:  "Missional" = Reaching the lost by forsaking the found.

Please keep Pr. David Kind and the congregants and students our Lord serves through him in your prayers.  And, consider sending them a donation.  They're going to need it to relocate or rebuild in the near future, as their Holy House of Prayer will be bull-dozed to make room for housing soon.

And, as Pr. Weedon reminded everyone, please keep the MNS DP and BoD in your prayers, too, that they would be led to repent of their actions in this mess.

This whole thing just sickens me, as I know it does many others.  But, our Lord will work good even out of this mess for His faithful.  I pray that ULC will emerge on the other side of this ridiculousness stronger than ever before.  Lord, grant it, in Jesus' Name.  Amen!
Posted by Rev. Thomas C. Messer, SSP at 10:41 PM