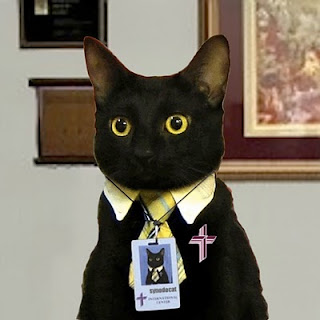 You've met Synodocat.  He's the "brains" of the synodical operation.  He meets with church consultants, reads all of the relevant pop-Christian books, loves Contemporary Christian Music, believes worship should be a fun-filled, emotional, celebratory "experience," adheres to the principle that the end always justifies the means, which leads him to spend much of his time in "Executive Sessions" seeking input from his cronies and from lawyers on how best he can carry out his plan to make the synod more relevant and appealing to the unbelieving world (i.e. creating a church for those who don't like church).  Synodocat is convinced that God needs his help and the expertise he has acquired from church consultants and lawyers to move the synod along in the right direction.  The Holy Word and Sacraments are okay, but they're just not enough to get the job done.  Every time Synodocat snaps his fingers, people go to Hell, after all, and he believes that it is his solemn duty to teach the synod to love the lost and to vigorously go about the task of winning souls for Jesus.  Synodocat makes it a point to emphasize the fact that we do not have time for incessant, internal purification, and creates newfangled words like "missional" to describe his vision for the synod ("missional" appears to be a catch-all word encompassing everything we do to make the church more appealing to lost souls, that we may win them for Jesus; when you think "missional," think "whatever it takes").  On paper, Synodocat holds a quia subscription to our Lutheran Confessions, but, in practice, he holds a quatenus subscription.  Heck, the truth is that Synodocat hasn't read the Confessions in years, since he's too busy reading and learning from the Rick Warrens and Kent Hunters out there (wait, aren't Rick Warren and Kent Hunter a little dated?  Exactly!).  Synodocat believes that to be a "missional" synod, everyone must be a "minister" and a "missionary."  Synodocat loves the so-called "Great Commission" (Matt. 28:16-20) and believes it is fulfilled whenever a Christian (i.e. a "minister"/"missionary") tells someone about Jesus, an interpretation which results largely from ignoring verses 16-18 of that famous passage, which, in turn, leads to a misunderstanding of verses 19-20 (well, that, and the fact that Synodocat has learned to interpret the passage from modern "evangelicals").  As Synodocat fulfills what he believes to be his Divine Purpose in moving the synod down the path of his vision, he enjoys the many perks that come with the job (free lunches, awards and accolades, lodging in luxury hotels, a large expense account, and a six-figure salary, just to name a few - these perks are blessings from God for fulfilling his "sacred duty").  There is much more that could be said about Synodocat, but this short intro should suffice for our purpose here, which is to introduce you to SynodoBot.

Synodocat does the thinking, SynodoBot does the enforcing.  Synodocat is the "brains," SynodoBot is the "muscle."  So, for example, let's say Synodocat makes a decision to, I don't know, cancel the most popular radio broadcast on the synodically operated radio station.  Synodocat cannot be bothered to execute this decision, so he sends SynodoBot to do so.  Synodocat needs to maintain deniable plausibility, so SynodoBot is called upon to break the news to the employees of that radio broadcast and to the synod at large.  Or, let's take a look at another example:  Let's say Synodocat wants to sell the chapel and other property used by one of the synod's most faithful and effective Campus Ministries, so that he can use the money from that sale to put into place the plan he has developed for campus ministry in his district, a plan that meshes well with his idea of "everyone a minister/missionary," since it involves raising up students to be "missionaries" on many campuses throughout the district, and so forth.  Again, Synodocat cannot be bothered to execute this decision, so he looks upon SyndoBot to do so.  Synodocat may send an email at 5 a.m. to the faithful pastor who serves at the Chapel to be sold, but it will just be to announce that SynodoBot will soon be enforcing the decision made in "Executive Session."  SynodoBot will take over from there, and Syndocat will be unavailable for comment until that decision is executed, making sure not to answer his phone and to set his email up to deliver automatic responses.  This may not seem like the most churchly way of doing things, but, remember, the end justifies the means, and when the end is to create a new and improved, relevant and appealing synod/district, where the "mission" is to win souls for Jesus by doing "whatever it takes" (i.e. "being missional"), well, you can't be bothered with being churchly.  I mean, there are people dying without Jesus out there!  This is no time to worry about being churchly!  So, Syndocat devises the scheme and SynodoBot executes it.  It really is a genius system.  Here's a pic to illustrate the system at work:

So Synodobot is David Strand?

SynodoBot takes on many manifestations - he is "legion."

I didn't know Synodocat had fingers!

You have much to learn, o padawan! ;)