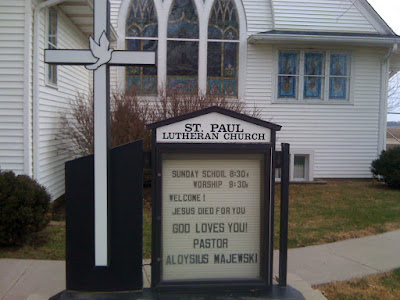 That makes all the difference in the world, that we Christians do not grieve the loss of our loved ones who depart in the faith like those without hope.  Oh, we grieve and mourn and shed as many tears as they do, but we are not led to despair, for even as those tears stain our cheeks, we have the sure and certain promises of God to comfort, console, and support us in our time of sorrow.  We don't have to wonder and imagine where our faithfully departed loved ones are.  We don't have to rely on wishful thinking and hope that they're in "a better place."  We know exactly where they are.  The pain is still real.  The tears are just as wet.  And there's no shame in that.  Jesus wept at the death of His friend, Lazarus, and it's okay for us to weep, too.  But, our tears are soaked up by the rock solid promises of God which assure us that this is not the end, that we who believe in the same Lord Jesus Christ as our faithfully departed loved ones will see them again.  For our hope is not a "Gee, I really hope all this Jesus and heaven stuff is true" kind of hope, but a rock solid, take-it-to-the-bank kind of hope, as sure and certain as the blood Jesus shed for us on the cross.

This past week has been very hard.  Last Friday, I watched my best friend die.  Monday, I viewed his dead body lying in a coffin.  Tuesday, I served as Liturgist at his Funeral Service.  Yesterday, I presided over his Committal and watched his remains get lowered into the earth.  I shed many tears, gave and received many hugs to those who mourn his death as I do, have had trouble sleeping, and even more trouble trying to concentrate on the pile of work I need to catch up on.  But, through it all, I have had God's promises.  I have had His Word reminding me time and time again that my friend and brother, Al, is fine; that he is, in fact, better than ever.  That Word was delivered in the liturgy and hymnody of the Funeral Service, and most beautifully in the sermon preached by Pr. Dan Chambers, who reminded us how very blessed are those who die in the Lord, a concept that seems absurd to the dead and dying world in which we live, but a truth proclaimed time and time again in Holy Scripture, and that Word was reinforced again yesterday in the Rite of Committal.

As I said at the beginning of this post, that Word makes all the difference.  Contrary to popular belief, time does not heal all wounds.  But, the Word Made Flesh does.  He heals all wounds by being wounded and killed in our place.  And for those who cling to Him in faith, as my brother Al did, death is but a passageway to a life where there is no more, and never will be any more, wounds to heal.

Al knew this to be true.  He preached it.  He lived it.  And, even from the grave, he's still preaching it.  His sons, Dustin and Chris, were looking through his study and found a legal pad on his desk with page after page of notes scribbled by their dad.  On one of those pages, Al had jotted some thoughts down about the concept of "Time."  As I read what he had written, tears welled up in my eyes as I smiled at the same time.  It's typical Al, whose mind was always engaged in deep thought, especially when it entered the realm of theology and philosophy.  He starts off by comparing time to a predatory animal that sneaks up on us, stalks us, smelling our trail, and moving closer to making the kill day by day.  He mentions how we can try to outrun it with doctors and new technology, but that, in the end, this predatory animal called "time" is going to hunt us down and make the kill.  "The singular concept in this whole world is death," he writes.  He then goes on to entertain the idea that maybe the saying "vale of tears" refers to "time"; that it may be time itself that brings about the tears associated with our pain and suffering in this world.  I can just picture his mind working as he was writing this.  Always wondering.  Always searching.  But, always anchored in the Truth of God's Word, as is evident by his concluding sentence, which reads:

"Thanks be to God!  For according to His Promise - His Word - there shall be no pain, suffering, or tears for those who believe in the Christ, the Anointed One of God, who came to save us from our sins and death, and has also promised us the gift of eternal life.  I pray that you and I look forward to that time without time!  Amen."

I will miss my friend and brother tons, but I am comforted and ever so thankful that he knew that His Redeemer lives, and that he is now enjoying that "time without time" to which he looked forward.  I pray that all who will miss Al as I do look forward to that "time without time" as well, and to the joyful reunion which awaits us in heaven.  I was pleased to see so many people, including several brother pastors, turn out for his visitation and funeral.  Al touched a lot of lives and was a blessing to many.  I was also blown away by how many people approached me and said, "You must be Tom/Pastor Messer.  Al/Pastor Majewski always talked about you."  It was testimony to how close we were.  And, I'm sure if things were reversed, people I know would have said the same to him.

The next few weeks will be hard for all of us who mourn Al's departure.  Christmas day will be especially difficult for his family, and for me as well.  Since 1998, not a Christmas day has gone by without our ritualistic phone call.  That phone call always began with the one who made the call giving the other one a hard time for not calling first:  "Well, I figured I'd give you a call to wish you a Merry Christmas, since you obviously don't care enough about me to call and wish me one!"  I hated it when he beat me to the punch, because he would lay it on thick.  Those who knew Al know exactly what I mean.  He could carry on like nobody's business, and the only thing to do was to sit back and listen until he was done.  But, it was always great fun and we always got around to sharing with one another our love and well wishes for each other and our families.

But, as much as I will miss that phone call (and the plethora of others we made to each other often), I look forward to that "time without time" when I shall see my brother again.  We do not grieve like those without hope.  Thank God for that!  I pray that the sure and certain promises of God will carry Marjorie, Dustin, Chris, Brittany, Jakob, and all of Al's family and friends, through the difficult days ahead.  For "precious in the sight of the LORD is the death of His saints."  This is most certainly true!  Amen. 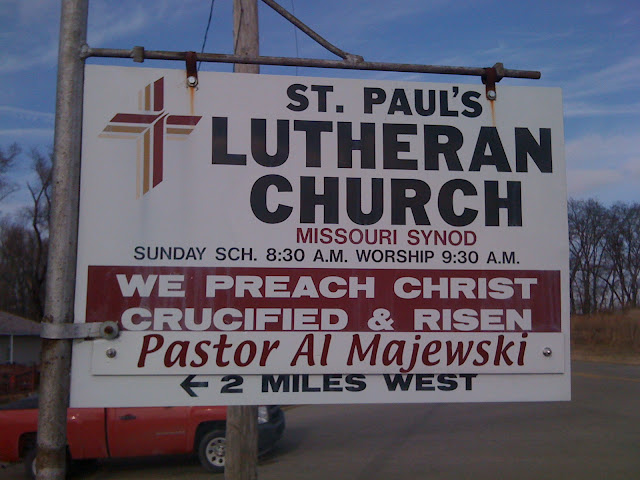