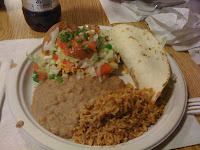 Last night, our SALT (Evangelism) Committee hosted an Authentic Mexican Dinner, which was followed by Peace Movie Night.  The dinner was out-of-this-world DELICIOUS!  Special thanks to Miguel for putting together the menu and doing most of the cooking, and to Carolyn, Darren, Andrea, and Larry for all their help, which ranged from purchasing some of the ingredients, setting everything up, assisting Miguel with the cooking, serving those who attended, and doing the most thankless job of all - cleaning up.  Thanks also to the members of our Youth Group who were there to assist with serving and clean-up, and to Vern and Mary for lending a very helpful hand in the clean-up activities as well.  The event was a huge success, and I say that without having the first clue whether or not we raised more money than we spent in holding the event.  I hope we did, since this was put together to be a fundraiser for SALT, but even if we didn't, it was a success in that it afforded many of our members, and a few guests, the opportunity to enjoy some wonderful fellowship around the delicious meal provided.  I'm quite certain that a good time was had by all who attended.  And, I was pleasantly surprised to see so many people there, given the weather which made for nasty road conditions and surely kept some people away.  Here are some pics of the event (taken by my iphone, so please bear with the poor quality of some): 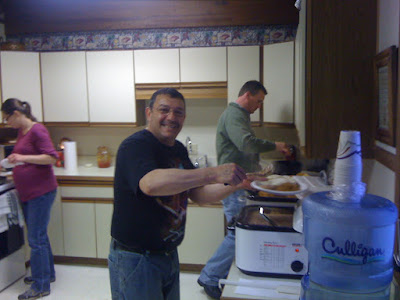 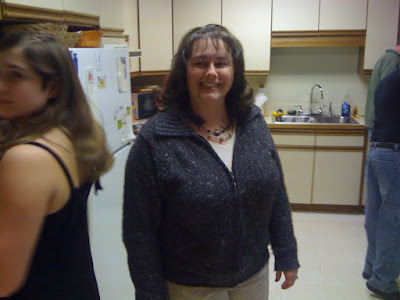 Carolyn (SALT Chairperson and Mastermind of the event) 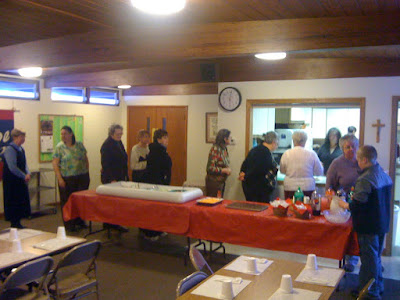 Lining up to get the goods! 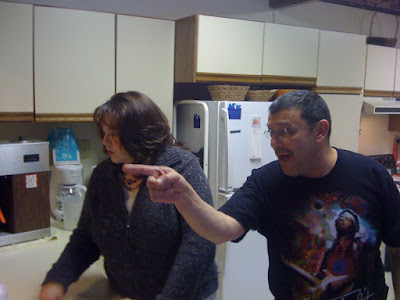 "I told you we have a set menu, Pastor.  There are no steak fajitas!" 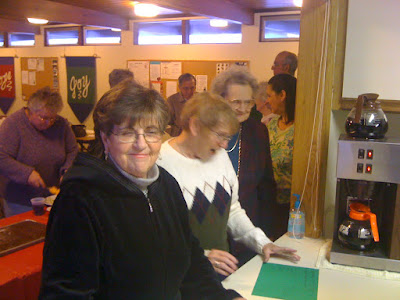 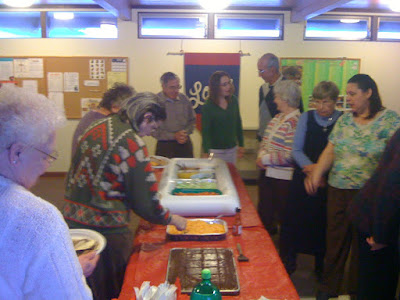 Topping the tacos and tostadas 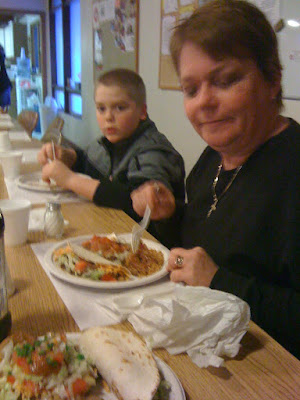 My wife saying a silent prayer that there will be Mexican food in heaven (my son, Aaron, wondering what's wrong with his mother) - :) 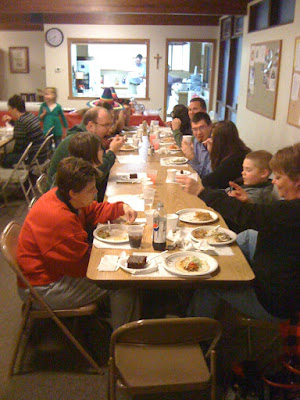 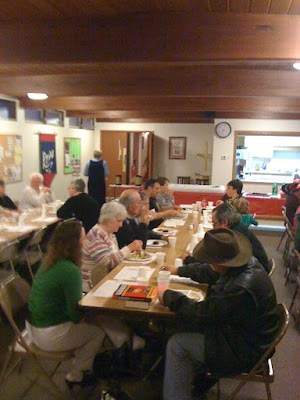 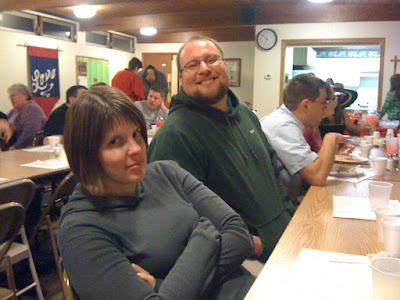 Preggers Meggers and Chris responding to the question, "How much do you love your pastor?"  'Nuff said! :) 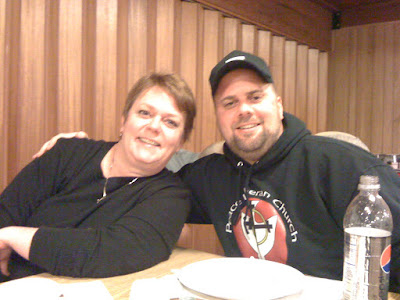 A happy pastor and wife!

After the dinner, 12 of us stayed for Peace Movie Night and watched the movie, "Surrogates," starring Bruce Willis.  One of the reasons I chose this movie was the review I read here at Christian Spotlight on Entertainment.  After watching the movie, which I thought was decent, I think that review stretches things a bit regarding the "Christian elements" in the film.  Toward the end of the review, we read:

Remarkably, the movie manages to incorporate all these disparate themes--sin, crucifixion, atonement, Satan, false prophets, death, resurrection—without beating the viewer over the head with the obvious Christian message underlying those elements. One has to pay careful attention to catch the symbolism of events and archetypal characters.

Maybe I didn't pay careful attention enough, but I didn't see an "obvious Christian message" portrayed in the film, and I think whoever wrote the review gives this film's makers far too much credit and is guilty of forcing the Christian elements he/she sees into the film.  I mean, I can understand the points being made; I just think they're stretched and forced.  But, it was a decent and entertaining flick.  And, I was actually quite pleased that the content was as mild as advertised.  You never know these days what you're going to get in a PG-13 rated film.  Most of them would have been rated R when I was growing up.  But, this one was actually rated well.  Very little in the way of sexual inuendo, no "F-bombs" were dropped, and the violence wasn't overly done.  With the exception of the one scene in which Bruce Willis' character makes a crass statement to a lawyer about male genitalia, which the movie could have definitely done without (why do they have to get that one scene in there, anyway?!), it was as mild as PG-13 movies come these days.

I do think there is some truth to this part of the review:


The movie seems to be saying that, in this day of computer networking (e.g. Facebook and Twitter), people are interfacing through virtual identities and not in person. In virtual reality, everyone is perfect; no one is old or fat or ugly or handicapped. The beauty of variation is sacrificed for the beauty of uniformity. This dependency has made people afraid of imperfection and real social interaction. All judgments are made on the superficial basis of appearance.

While "social networking" can be a blessing, it can also be a curse (much like anything else in this dead and dying world), and I believe it is having a profound effect on our youth, the results of which we may not fully realize for a while.  We have created a superficial world in which a great many (not just youth) spend the majority of their time, and this simply has to play a role in how they view, and live out their lives, in the real world.  Only time will tell how severely this impacts our society as a whole, but there are surely indicators that it has already had some pretty significant impact.

Anyway, I was glad for the time spent with my brothers and sisters in Christ last night, both during dinner and watching and discussing the movie.  It was a really good time.  And, I concur with those who suggested that Miguel cook for us every Friday night, even though, for some odd reason, he didn't think that was such a keen idea. :)

Here's a pic of "Surrogates" playing on our big screen (I am really digging our new set up - the big screen and excellent sound system really does provide for as close to a genuine movie theater experience as one could have - thanks again to Larry and to our gracious donors for making this a reality!): 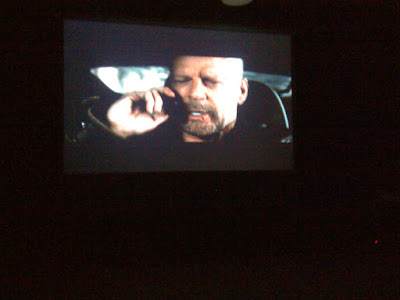 The dinner was fantastic! Thanks to everyone who made it happen. Maybe Miguel and his 'crew' could cook for us every week. I also appreciate the new projector. I now have power point skills to use in my WW meeting and maybe for other meetings as well. You never know!

Mmm... the smell of that dinner has drifted all the way to Chicago!