No-Fault Divorce and the Pastor-Congregation Relationship 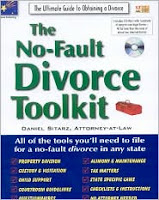 Has the "no-fault divorce" mentality, which permeates our society, had a negative effect on the pastor-congregation relationship?  I've been thinking about this a lot lately.  I think it has.

Our culture has accepted the idea that personal happiness is a god worthy of worship and praise.  Self-esteem and self-satisfaction trump self-sacrifice and devotion to another these days.  All that matters is that I'm happy.  When I'm not happy, I need to figure out what is making me unhappy, remove it from my life, and replace it with something that will make me happy again.  We have become a me-centered, "have-it-my-way" society.

So, if your spouse is no longer making you happy, it is not only acceptable, but preferable, according to our society, to leave your spouse and find another.  Or, to have no spouse at all - whatever makes you happy.  That's the important thing - your happiness.

This is what has come about through the enactment of no-fault divorce.  You used to have a reason to divorce your spouse.  You used to have to show just cause to dissolve a marriage.  Not anymore; not since the 1970s here in America.  You need no reason at all.  It is enough that you are unhappy.  Heck, you really don't even have to be unhappy, and you certainly do not have to present a case for, or prove, unhappiness.  You can file for a divorce these days just because you feel like it.

In order to see this, though, one has to acknowledge that the relationship between the pastor and the congregation he serves is like a marriage.  To get people to acknowledge such is no easy task these days, since many have wrongly been convinced that the relationship is more akin to an employer-employee relationship.  And, to be sure, that is exactly the sort of relationship it is in many denominations.  But, not for Lutherans.  We Lutherans believe, teach, and confess that the pastor receives his call to serve in a congregation from God.  That call is issued by God through the congregation to the pastor.  God uses other human means (calling committees, seminary placement officers, Council of Presidents, etc.) during the calling process, but, at the end of the day, the call the pastor receives is a Divine Call.

As any married couple will readily attest, the honeymoon doesn't last forever.  Living with another sinner takes work and lots of patience.  It requires commitment and dedication, a willingness to live with all those things your spouse does that get on your nerves, and a readiness to forgive and to be forgiven.

The same is true for the pastor and the congregation.  The pastor will make mistakes.  He is a sinner.  He will say and do things that get on the congregation's nerves.  He will make bad decisions.  He will fail to do things he should have done.  And, vice versa.  The congregation, full of sinners, will make mistakes, get on the pastor's nerves, make bad decisions, and fail to do things they should have done.  Learning to live together requires commitment and dedication, a willingness to live with all those things that get on your nerves, and a readiness to forgive and to be forgiven.

But, just as the no-fault divorce, personal-happiness-focused, mentality has wreaked havoc upon the institution of marriage, so, too, has it had a negative impact on the pastor-congregation relationship.  Congregants whose pastors do not make them happy often leave to find another pastor who will do so.  Much of the time, it has nothing to do with infidelity or unfaithfulness on the pastor's part.  It's just that he doesn't make them happy.  They're not getting what they want out of the relationship any longer, and they have no desire to dedicate their time and energy on the relationship, so they just leave.  The vows they made to love and support the man God had given them to serve in their midst are negated by their desire to pursue personal happiness.

But, it works both ways.  Pastors, too, are often guilty of succumbing to the no-fault divorce mentality.  When the going gets tough and the congregation no longer makes them happy, the temptation is there to flee.  Some will leave the ministry altogether, while others will take measures that will hopefully lead to their being called to serve in a different congregation.  Rather than remaining faithful to their vows to love, support, and serve the congregation, the desire for personal happiness becomes more important.

The no-fault divorce mentality that permeates our culture has no place in the church, but, sadly, like many other worldly influences, it has made its way in.  It would be beneficial for the church to recognize that and work toward overcoming it through ongoing catechesis concerning the pastor-congregation relationship.

One easy step we could take in that direction would be to discontinue using the terminology "first call."  A pastor does not have a "first call," but a singular Divine Call.  I always wince when people ask me, "Is this your first call?"  Already, that implies that there will be additional calls in the future.  There may be, but that should never be assumed or implied.  This is not my first call.  It is my call from God to serve His flock in this place, at this time.  Period.  It is the only call I have from Him and, as far as I know, the only call I will ever have from Him.  Thinking along these lines changes things, for it means that I am not serving the congregation I serve until something better comes along, but that I am fully committed and dedicated to serving here for as long as the Lord desires.  If He has other plans, so be it.  But, I am not to serve with the assumption that He will have other plans for me.  I have made vows to this portion of the Lord's flock I have been called to serve.  The Lord has joined us together, and what He has joined together, let no man put asunder - especially for the superficial and selfish reason of personal happiness!
Posted by Rev. Thomas C. Messer, SSP at 8:23 PM