Back from the great outdoors

Actually, I returned late Saturday, but haven't had a chance to blog until now.

First things first, I think the DNR is lying to us in Michigan.  They claim that the deer herd is at an all time high.  I find that hard to believe.  They claim that the deer herd in the county in which we hunt (Montcalm) is one of the most heavily populated in our state.  I find that even harder to believe.  Two deer were all I saw in the woods ALL WEEK - TWO!  One came from behind me at around 6:50 a.m. on opening day.  It was too dark to even tell whether it was a buck or a doe - couldn't even see the thing through my scope, even though it was no more than 20 yards behind me.  Had to let it pass me by.  But, I was thinking at the time, "Hey, this is good.  The deer are moving.  Surely this is going to be a good hunt!"  Um, no.  Not so much.  The only other deer I saw was in the afternoon on opening day, but it was off to my right and behind some thickets.  Only caught a glimpse of that deer for a few seconds.  Waited for it to come out, but it never did.  That was it.  No more deer ALL WEEK!  The deer herd is at an all time high?  ROFLOL!

But, all was not lost.  My uncle had a pretty productive opening morning.  He bagged a nice doe at 7:10 a.m., shot at a coyote that was coming for that fallen deer about an hour later, but missed, and had a four-point buck come in around 9:30 a.m.  He had to shoot at it left-handed and ended up doing more damage to his jaw than he did to the buck.  Pretty comical to hear him describe trying to shoot left handed with the shotgun seated in his right shoulder, instead of his left.  We still have no clue how he could have managed that.  Lots of fun ribbing him about that the rest of the week. :)  Here's a pic of the doe he bagged (not exactly what he was looking for, but at least he'll have meat in his freezer this year): 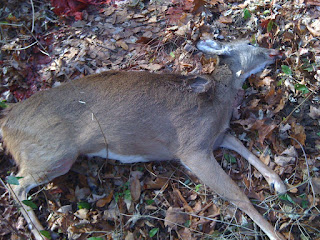 Other than that, we were all shut out the rest of the week.  My uncle never saw another deer besides those two opening morning, and my poor dad didn't see deer one all week.  This was the worst year we have ever had in the woods.  We have had seasons with no deer to take home, but never a season in which we saw so few deer.  The deer herd is at an all time high?  Again, ROFLOL!

But, it was an enjoyable week, all the same.  And, because my uncle was able to bag a nice doe, we were able to enjoy the meal I look forward to more than any other all year - Heart and Liver Dinner: 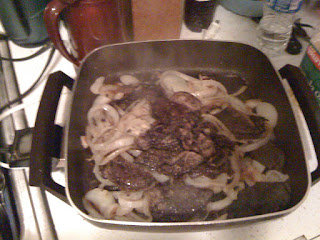 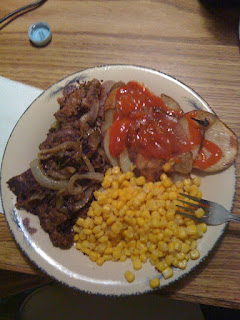 It doesn't get any better than this (it's even better than a nice sack of choke and pukes!)

On Thursday last week, my dad and I went and checked out a different hunting area.  As we were scouting out the area, we came across what we think is an old, abandoned Ford Fairlane in the middle of the woods.  Here's a pic of my dad standing next to the only trophy he bagged this year: 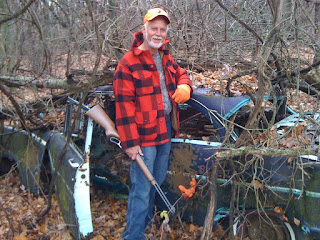 (I'm not helping to drag that thing out of the woods!)

So, another year of deer hunting has come and gone.  Now it's back to work.  The busy season in the Church Year is quickly approaching.  Lots to do.  The big buck will have to wait another year, unless I'm able to squeeze in a couple afternoon hunts in the next week or so, which I highly doubt.  But, I am left with the comfort of knowing that it's only 356 days until opening day next year.  Can't wait! :)

Chris,
I know what you mean; being in the woods certainly lends itself well to meditation upon our Lord. Interesting blog, too. :)

Pr. Weedon,
You didn't finish that exhortation - "Run, Bambi, run into my shooting zone, so that I can get a shot at you! There, all better. :)

I must say I am truly NOT saddened that I didn't get to enjoy that venison with you! ;)