Hang in there, Sparty! 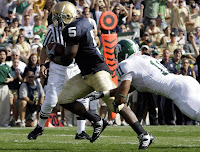 Sparty gave the Irish all they could today, but came up a little short (33-30).  After last week's loss to CMU, I was happy to see my team battle a good Notre Dame squad today.  It didn't look good early, but they hung in there and fought to the end.  Poor Cousins (MSU QB) - that kid had a heck of a game.  I hope he doesn't hang his head and is able to put the two errant passes in the last two minutes behind him (one that should have been a TD and an interception which ended the game) and get ready for next week.  Call me the eternal optimist, but I still believe we have a chance to contend for the Big Ten title.  Coach Dantonio needs to get the kids to put the nightmare of last week and the heart-breaker of this week out of their heads.  The season starts next week in Wisconsin.  If we're ready to play, we can beat the Badgers.  Then, that other team from our state, about which we do not speak around these parts, pays us a visit.  After we beat them, we'll be 2-0 in the Big Ten and on our way!  So, hang in there Sparty.  There is a lot of football left to play in this season!
Posted by Rev. Thomas C. Messer, SSP at 9:31 PM