From Plato to Jesus

You know you have a group of devoted students when they will sit through an hour-long introduction to Platonic philosophy. :) 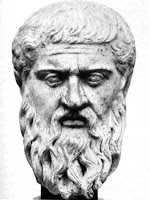 Tonight, during our Christian History 101 class, we studied us some Plato.  As I prepared for class this afternoon, I wondered how the people would react to the head-scratching, brain-stretching, aspirin-inducing thoughts and ideas of the master philosopher.  They took it far better than I imagined they would.  There were some glazed-over, blank stares at first, but understanding did eventually come (I think!).  It turned out to be a great class with lots of good, thoughtful discussion.
Of course, we didn't do Plato justice in the hour we spent, but we got enough of an introduction to understand how his philosophy was influential in early Christian thought, especially in the east (and, really, continues to be influential to this day).
After our venture into Plato's world (or, rather, worlds), we gathered together in the place where the world of Being and the world of Becoming come together (let the reader understand) and received the Divine Gifts our Lord graciously delivers through His Holy Word and Most Blessed Sacrament, during our observance of the Feast of the Martyrdom of St. John the Baptist.  A most blessed evening it was!
Posted by Rev. Thomas C. Messer, SSP at 10:53 PM