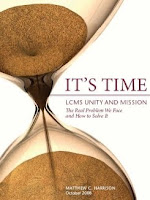 The blogosphere has been abuzz ever since the official notice of nominations for the LCMS Praesidium was released earlier this week. Some are expressing their fear of what a Matthew Harrison presidency would involve. They speculate about "purges" and "cleaning house," as if Harrison would immediately begin some sort of grand inquisition upon taking the office, ousting any and all pastors and congregations that don't live up to his "narrow view" of Lutheranism. It really is beyond silly to read what some have written along these lines. It is equally silly to hear some posit that the plan Harrison sets fort in "It's Time" would bring a halt to missions in our synod, as if we would be so focused on having the theological dialogue he proposes that we couldn't be doing anything else.  And then there are those who link Harrison to what they believe to be the "radical right" in our synod, full of "meanies," who want the heads of anyone and everyone who do not practice Lutheranism exactly as they do.  Also quite silly.

The sober truth is that, of the two leading candidates for the LCMS presidency, only Harrison has an actual plan to address the divisions evident among us in our synod.  His plan is quite Lutheran in nature, calling for us to use the formula which led to our Formula of Concord, putting those divisive issues among us on the table to analyze them against Scripture and our Confessions.  His plan does not call for immediate expulsion from our synod of anyone.  His plan does not even come close to resembling the sort of "witch hunt" some irrationally fear.  His plan calls for us to do what we should be doing - engaging in honest, deliberate theological dialogue to work toward resolution of those issues which divide us.

What is Kieschnick's plan?  Having witnessed nine years of him occupying the office of President, and having read his recently released book, "Waking the Sleeping Giant," wherein he shares his vision for our synod's future, I believe his plan can be summed up with the image below:

Now, some would argue that Kieschnick has illustrated that he does understand that there are divisive issues among us, and that he does realize the necessity to address them.  After all, he has stated publicly several times, and has written publicly in his book, that there are some controverted issues among us which need further exploration and work towards consensus.  But, what is his plan to accomplish that?  It seems, at least to me, that his plan is limited to precisely what his opponent claims will not work, namely to garner a mindset within our synod through the implementation of restructuring changes and convention resolutions (or, "covenants of love," as they are advertised by some) to lovingly agree to disagree on the matters that divide us.  This has surely been the mindset produced by the various theological convocations which have been held under Kieschnick's watch.  The dialogue which has occurred during those convocations has yet to result in any decisive conclusions about anything.  If anything, the purpose has been more to recognize and foster what Kieschnick and others view as "blessed diversity" among us than to actually resolve our differences.

The differences between Harrison and Kieschnick are stark and vast.  What it really boils down to in the end, though, is whether or not we want to follow the "agree to disagree" mentality Kieschnick favors or the deliberate dialogue to engage our disagreements and work toward agreement based on Scripture and our Confessions favored by Harrison.  I don't think there is any question as to which approach is more Lutheran.

It should also be said, as many have rightly indicated during the course of the many conversations being had around the blogosphere these days, that the problems we face within our synod will not be solved by electing the right man as president.  As an avid Harrison supporter, I am quite aware of the fact that, should he be elected, he will not be able to wave some magic wand and bring our problems to an end.  But, he knows that better than anyone else.  His plan calls for a 10-year process.  He knows that our problems will not be solved overnight.  It will take patience and steadfast determination to work through the issues that ail us.  But, he believes it is work worth doing, as do I.  And, perhaps best of all, he believes that the only way the ship of Missouri can be righted is by the Word of God, as do I.  What will be the result?  Who knows?  Only God.  But, I am prayerful and hopeful that we'll give Harrison's plan a shot, for it is the only plan proposed which has a chance of allowing the Word of God to do its work among us.

Anyway, you can now listen to Harrison read aloud the plan he proposes.  He sounds like the kind of pastor and theologian our synod desperately needs as a leader.  It's Time, Missouri!  It's Time!