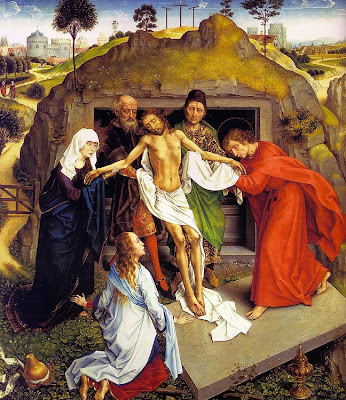 Antiphon:
P:  Christ became obedient to death, even death on a cross.
C:  O come, let us worship Him.


Office Hymn:  LSB 564 "Christ Sits at God's Right Hand" (st. 2)
Christ was the priest God swore,
Uniquely First and Last,
Who would in righteousness and love
Be unsurpassed:
"A priest forevermore,"
An oath God would not break,
"A priest within the order of
Melchizedek."
Old Testament Reading:  Lamentations 5:1-22

From The Lutheran Study Bible:  Jeremiah points out that the sins of all the people lie at the very root of their current suffering (cf. v. 16).  Because of their unfaithfulness, they struggle just to get enough to eat; they find themselves subjected to abuse and humiliation.  Lamenting in anguish, God's people appeal to the Lord for forgiveness and restoration.  In our own lives, we easily forget God and our calling as His people at times when it seems that everything is going our way.  God stands ready to forgive penitent sinners by restoring His blessing to us through the blood of Jesus Christ.  * Father, keep us faithful in good times and secure in our faith during bad times, for we are Yours at all times.  Amen.

From The Lutheran Study Bible (vv. 1-10):  Melchizedek, both priest and king, showed the true nature of his authority by receiving tithes from the patriarch Abraham and blessing him.  As both king of righteousness and king of peace, Melchizedek foreshadowed Christ's work of justification.  As Abraham gave offerings and respect to Melchizedek, greater respect is due to our High Priest, Christ.  He serves without end to lead us into His kingdom.  * Lord Jesus, You are my Priest and King.  Rule over my life, and grant me righteousness and peace from the Father.  Amen.

The Writing (in place of the homily) by Ephraim Syrus (from Treasury of Daily Prayer):

They sealed You up within the tomb, and set guards, that Your resurrection might be believed among those who deny You.  It was for You that they sealed the tomb and set guards, O Son of the Living One!  If they had neglected You and left You and gone after they buried You, there would have been room to lie and say that the disciples stole You, O Quickener of all!  When they craftily sealed Your tomb, they made Your glory greater.
Daniel was a type of You, so also Lazarus; one in the den, which the Gentiles sealed up, and one in the tomb, which the people   opened . . .
If they had left Your tomb open, their mouth [could have remained] open.  But they went away because they had shut Your tomb and sealed it and closed their own mouths.  Yea, they closed it, and when they had senselessly covered their own heads.
But in Your resurrection You persuade men concerning Your birth.  You were pure in the womb that was sealed and alive in the tomb that was sealed.  The womb and the tomb, being sealed, were witnesses to You [and to Your divinity].
The belly and hell cried aloud of Your birth and Your resurrection:  The belly, which was sealed, conceived You.  Hell, which was closed up, brought You forth.  Nature did not cause either the belly to conceive You or hell to give You up! . . . Thus do they proclaim that You are of heaven.
Sealed was the tomb to which they had entrusted You, that it might keep You dead, that is, safe, and virgin was the womb, which no man knew.  Virgin womb and sealed tomb, like trumpets, proclaimed Him in the ears of deaf people.
Collect of the Day:
O God, creator of heaven and earth, grant that as the crucified body of Your dear Son was laid in the tomb and rested on this holy Sabbath, so we may await with Him the coming of the third day, and rise with Him to newness of life, who lives and reigns with You and the Holy Spirit, one God, now and forever.  Amen.