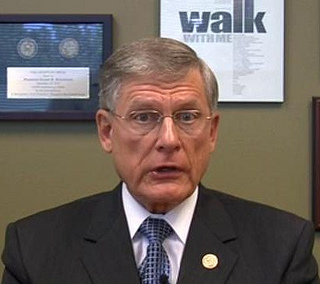 In his weekly missive yesterday, former synodical president, Jerry Kieschnick, chimed in on the upcoming election for LCMS president, which will take place online, beginning tomorrow, June 22, and concluding on June 25. In his missive, he writes:

Evidently, Jerry missed the memo. As we have seen, some of the district presidents aren't waiting around for delegates to seek their counsel, but have already sent out campaign letters in the hope of swaying delegates to vote for the candidate of their choice. Or, maybe Jerry didn't miss the memo at all, and this is his way of offering his "humble and respectful" support to those district presidents, who have already chimed in, while encouraging delegates from other districts to contact their district presidents, who haven't sent out campaign letters, for whatever reason (maybe, hopefully, out of a sense of decency and ecclesiastical tact). Whatever the case, the message from Jerry is clear: District presidents know best, and they should play a significant role in the process of electing our synodical president. After all, these dudes have been elected to serve their districts, so they must be trusted leaders in our midst.

It's kind of ironic, isn't it? Three years ago, Jerry was soundly defeated in his bid to be reelected as synodical president, as Matthew Harrison was elected on the first ballot by a pretty significant margin, as far as LCMS presidential elections have gone in the past decades. Shouldn't that make him a trusted leader in our midst? Maybe we should just forgo asking our district presidents for their counsel and ask Harrison for his.

What a grand idea! Thanks, Jerry. President Harrison is a trusted leader in our midst. He knows all three nominees for LCMS president. I'm going to ask him, and I humbly and respectfully advise all delegates to do the same:

You were elected to serve as our synodical president in July, 2010, which makes you a trusted leader among us. I am writing to seek your counsel in regard to the upcoming election for synodical president. You know all three candidates. For whom do you think I should vote?

Okay, so, no, I'm not really going to send that inquiry to President Harrison, and neither do I really advise delegates to do so. I'm just trying to highlight the irony and absurdity of Jerry's "humble and respectful" suggestion here, especially the bit about our district presidents being "trusted leaders" by virtue of being elected. If we have learned anything of late, the district presidents who have chosen to forsake all sense of decency and engage in electioneering have proven themselves to be anything but "trusted leaders."

That Jerry Kieschnick would send out this suggestive missive just a few days before the polls open is not surprising, given the fact that he has seen fit to offer his own not-so-humble and disrespectful commentary and criticism regarding our current synodical president, jumping on the bandwagon of the criticism heaped upon our synod and its president a few months back. He even sent out an "Early Edition" of his "Perspectives" back on February 11, which included a section sub-titled "People are asking . . .," wherein he noted that lots of people were asking him whether or not he'd be willing to serve again as our synodical president, how he was humbled by that, how he has always believed that the office should seek the man and not the man the office, which was followed up by a reminder that the deadline for nominations was quickly approaching and seemed to be the reason for the "Early Edition" of his "Perspectives," even though he was totally not seeking the office in any way - totally. So, not surprising at all. This is the same sort of "Ecclesiastical-ness" we all grew so fond of during Jerry's tenure as our synodical president, where churchly matters were often handled behind the locked doors of Executive Sessions, and where lawyers, bylaws, and CCM opinions were consulted before, or even in lieu of, Holy Scripture and our Lutheran Confessions, and where the ends always justified the means, so that the circling of the wagons was always employed to protect the institution of Synod, Inc. and we never heard any repentant apologies from our "trusted leaders" about anything (if I'm wrong about that, show me). Nothing says "Ecclesiastical" like Executive Sessions, lawyers, bylaws, CCM opinions, and the circling of the wagons. If that's your bag, by all means, contact your district presidents for counsel.

As for me, as soon as the polls open and I can cast my vote, I will do so for President Harrison, as will the lay delegate of the congregation I am blessed to serve. And, amazingly, we will be able to do so without having contacted our district president for his counsel. Go figure! We will do so not because President Harrison has the right vision or is trodding the right path, or because he's just more awesomer than the other candidates. We will do so simply because he shares our confession of the faith, promotes that confession, and desires to live and lead by that confession, which includes his ready admission that he is a sinner in need of Jesus Christ. He's transparent, unafraid to speak his mind or answer questions directly put to him in a direct manner (rather than screening questions in advance to formulate the best political answer), an excellent theologian, has a true pastor's heart, and will readily admit when he's wrong, repent, and seek forgiveness - you know, like a Lutheran.

So, thanks for the "humble and respectful" suggestion, Jerry, but I'm good.
Posted by Rev. Thomas C. Messer, SSP at 11:30 AM

I think the biggest problem these DiPs and former DiPs have with Harrison is that he is "one of the boys." That is, he was never a DiP himself. I say, thank God we have been given a man who isn't a DiP to hold this office!

Yes, to those who are concerned that everyone be nicey-nice, I did use the term "DiP" in a derogatory way. I often use derogatory language (detracting from the character or standing of something)for people who are acting derogatorily, as the District Presidents who sent out their letters, and Synod President emeritus Kieschnick are acting. I think they are big boys and can handle it.

WHY THE ANCIENT CHURCH CHOSE LOTS ... NOT CAMPAIGNING (PART II)

"Look, here’s my suggestion, humbly and respectfully offered. Ask me, or maybe my good pal Nicodemus, for his counsel.

No, seriously. Let's be 'butting-in,' Lutheran practical here; or in other words, let's stay the course of being as wise as doves and as flighty as serpents. Look, I'm no mere district fiddler on a roof, or even a rural pastor with a leaky roof, mind you; I'm a wealthy Aramethean, with sepulchers to spare and scoreboards to burn. Nick, well, as a member of the Sanhedrin, he is a trusted leader in your midst. What I'm saying, delegate sheep and sheep DiPs, is that this guy has it down, dude. You might think of him as a master of Israel, or dare I say it, a theologian or something. No, really, he's that good. I mean this guy knows what he's talking about, like about baptismal regeneration and professional 'Blaze-ball stats and all kinds of esoteric stuff like that. And he knows all two nominees for Apostle, nominated to replace Judas. That's right. That's what I said: Judas. I say, and mark my words, replace the J-U-D-A-S.!

What's that, Nick? Okay, so now Nick tells me that's suppose to be 'the meek shall inherit the earth.' What a show-off! Meek, shy, earth, wind, fire, paper, scissors, rock -- what's the difference? I'm no theologian ... I admit it ... but does Nick have an honorary doctorate, like I do? I think not!

You know, on second thought, and having read Roemke, I'm starting to derogatorily wonder if maybe Nick's night moves are more those of a scared little boy, who can't handle it. So just cast the lots, and be done with it!"

Choose the one best answer: The expression on the neck-tied gentleman's face, displayed at the top of the blog-thread, is likely to have been evoked reflexively in response to hearing the spoken words ...

C. "Every three seconds, while you sit and are posting your 'suggestions,' yet another person is cast into hell-fire."

D. "Lutherans actually believe far less in four terms in one life-time, than in three Persons in one Essence."