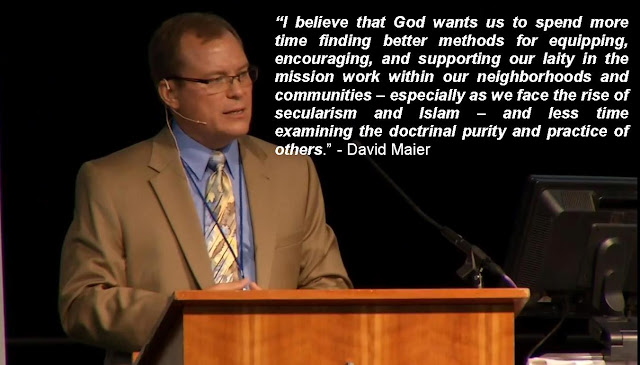 On the Friends of David Maier Facebook page, the following was shared today:


We like this response that David Maier gave to the Florida Georgia District when asked various questions.

(See if there is something you can do today to encourage others to support David Maier for Synod president.)

How would you describe the biggest challenge facing the Lutheran Church – Missouri Synod today?

I’d like to answer that question by telling this brief story I remember reading or hearing. The story was about 2 brothers who each had a son. For their sons Spring Break they decided to go fishing at their favorite summer fishing hole in north Texas. To make it more fun the four of them decided to also camp in the camper on the rear of the truck of one of the brothers. Everything was fine and dandy until rising early the next morning with the expectation of a full day of fishing ahead them, they opened the camper door and experienced an early north Texas spring storm with snow and 30 MPH winds. They closed the camper door and decided to play cards the rest of the day. The also did a little bit of drinking to pass the time. It wasn't an all-bad day, talking about fishing and how they would rather be on the water. The next morning the weather was just as bad with a little snow and a whole lot of rain. They spent their time like the previous day playing cards, doing a little reading, getting on each other’s nerves all the more. By supper that night, with the wind a little warmer but still howling, they not only stayed inside and didn't fish, but jabbed at each other with cutting comments and sarcasm and began “fighting.” So they packed up and went home.

We’ve to stop fighting each other. God has called us to "fish," to take the truths of Scripture, especially that God loves the world - God loves sinners (even a one like me), to take that Gospel message - which is still the power of God unto salvation – and declare it to the world. To be sure doctrine is important. Our Synod’s first President, C.F.W. Walther, recognized good doctrine as tantamount to a farmer having and sowing good seed: it is the only way to ensure a good harvest. BUT, having good seed, we must sow it (Matthew 28:18-20) – (we must fish), demonstrating our concern for those who face a Christless eternity! I believe that God wants us to spend more time finding better methods for equipping, encouraging, and supporting our laity in the mission work within our neighborhoods and communities – especially as we face the rise of secularism and Islam – and less time examining the doctrinal purity and practice of others. How we relate to one another says much about our theology, our God, and our relevance to the world. (Cf.1 John 4:7-16) [Emphasis mine]

Wait, what? Did nominee Maier just describe the biggest challenge facing the LCMS with a story about a Spring Break fishing trip with two fathers and their two sons? Seriously? Call me dense, but wasn't it the weather that prevented the fathers and sons from being able to fish? Shouldn't the "moral" of the story be, "When the weather's bad, you can't fish"? I mean, the "moral" that nominee Maier shares doesn't make a bit of sense. Is he trying to suggest that two fathers and their two sons will necessarily start fighting if the weather prevents them from fishing? My best friend and his son spent a week with my son and me a few years back at my parents' cottage fishing and hanging out. There were a couple of days when the weather prevented us from fishing. We didn't fight. So much for the "moral" of the story.

But, worse than the silly story with its silly "moral" is the fact that nominee Maier believes that the biggest challenge facing the LCMS is that we're not spending enough time "finding better methods for equipping, encouraging, and supporting our laity in the mission work within our neighborhoods and communities" and too much time "examining the doctrinal purity and practice of others." Amazingly, he uses C.F.W. Walther, our Synod's first President, to give the impression that he understands that doctrine is important, but then he does the VERY THING Walther himself already warned our Synod about in his day, as he goes on to state that our problem is too much focus on doctrine and not enough focus on reaching the lost. One wonders if nominee Maier has actually read what Walther had to say on this issue, because he couldn't possibly butcher our first President's position on this any more than he has here.

Here are a few quotes from C.F.W. Walther related to this issue:

Whether our Synod gains friends or makes enemies, wins honor or invites disgrace, grows or declines in numbers, brings peace or incites enmity, all this must be unimportant to us-just so our Synod may keep the jewel of purity of doctrine and knowledge. However, should our Synod ever grow indifferent toward purity of doctrine, through ingratitude forget this prize, or betray or barter it away to the false church, then let our church body perish and the name Missourian decay in disgrace. - C.F.W. Walther, "First Sermon Delivered at the Opening of Synod" (1 Cor. 1:4-5).

Oh my dear friends of the Lutheran faith, confession, and conflict, do not be misled when today those are everywhere accused of lovelessness who still do not give up the battle for pure doctrine in our Church. . . . Oh my dear friends, let us indeed sorrow and lament over this: that false teachers constantly assail the pure doctrine in our Church and thus are at fault for the conflict and strife in the Church. However, let us never lament but rather extol and praise God that he always awakens men who fight against those false teachers, for, I repeat, this pertains to "the common salvation." . . . This conflict is one commanded us by God and is therefore certainly one blessed in time and in eternity. . . . Oh, therefore, let us never listen to those who praise and extol the conflict of the Reformation for the pure Gospel but want to know nothing of a similar conflict in our days. - C. F. W. Walther, "Why Dare and Can We Never Give Up the Church's Struggle for the Pure Doctrine?" 1876

Nominee Maier sounds a LOT like our former Synodical President, Jerry Kieschnick, who never tired of making it known that he believed our synod's biggest problem was that many among us "wasted time on incessant internal purification at the expense of the lost in the world." What he never seemed able to grasp, and what nominee Maier seems equally unable to grasp, is that the biggest problem our Synod faces is that we are NOT united in what we believe, teach, confess, and practice. That doctrinal disunity cannot be swept under the synodical carpet, so that it just magically goes away. You cannot pretend doctrinal disunity away. It needs to be addressed, but both former SP Kieschnick and nominee Maier would have us stop wasting time on trying to address it, something that C.F.W. Walther warned against time and time again.

A woman was being abused by her husband. If she didn't have his socks folded exactly right, he hit her. If she didn't stack the dishes according to his preference, he hit her. If she didn't bow to his every whim, he hit her. Sometimes, he just hit her because he felt like it. He abused her horribly for years. All the while, he presented himself publicly to be a loving, committed husband to the wife he abused, and a loving, dedicated father to their two children. It was a sham, but he pulled it off for years. No one suspected him of being the abusive tyrant he was, and he made it clear to his wife that, if she ever said a word to anyone, the beating he would give her would make all the previous beatings over the years seem like loving hugs.

Finally, the woman couldn't take it anymore and went to speak with a counselor about this. The counselor told her, "You need to stop complaining about this and focus on all the good things you have with your husband. I know married couples who have bigger problems than you. At least your husband has a good career and provides you with financial security. You have two beautiful children from this marriage, and it sounds like both you and your husband do a pretty good job of keeping from them the ongoing abuse you suffer from your husband. It could be worse. He could be abusing them, too. But, he's not. My advice to you is to stick it out. If you have to take a beating once in a while, that's okay - it pales in comparison to all the good in your marriage. Don't waste your time trying to fix the abuse; instead, focus on being a good mother to your children. Don't make your children suffer by wasting time on incessant internal purification within your marriage. Find better methods to cope with your suffering. Stop being so selfish; this is not about you, but your family."

The "moral" of the story: "Put up with the abuse for the sake of your family."

Oh, and about that "equipping the laity in their mission work" thing, in the spirit of Bill Lumbergh, "Um, yeaaahhhhh, I'm going to have to go ahead and ask you to stop butchering that passage from Matthew 28 like that. If you could just go ahead and realize that what you call 'the Great Commision' is about making disciples through baptism, ongoing catechesis, and ongoing reception of the Lord's Supper, where Jesus fulfills His promise to be with us always, and NOT about 'equipping' the laity to be 'missionaries' in their neighborhoods and communities, that would be great. Mmmm Kay? Yeaaaaaahhhh."

Lastly, about that "finding better methods" thing, C.F.W. Walther and company fought against the "new measures" being everywhere promoted by revivalistic, Americanized Protestants in their day. It seems odd that we would have those claiming to be their spiritual descendants exhorting us to embrace them today. We have the Holy Word and Sacraments; there are no better methods than these - in fact, there are no OTHER methods than these.
Posted by Rev. Thomas C. Messer, SSP at 1:57 PM

WHY THE EARLY CHURCH CHOSE LOTS, INSTEAD OF CAMPAIGNING

Q: "How would you describe the biggest challenge facing The Way – Galatia today?".

But, no, no. Heh. Seriously. We’ve to stop fighting each other. I believe that God wants us to spend more time finding better methods for equipping, encouraging, and supporting our laity in the mission work within our neighborhoods and communities of Lystra, Derbe and Iconium – especially as we face the rise of shameless hedonism and dithering Mithraism – and less time examining the doctrinal purity and practice of others.

What I mean to say is this: Get off the backs of the Judaizers, Tarsus guy. Can't you see they mean well, and they've trained in Jerusalem just like you. To tell yet another morsel, "They speak loftily, and carry a big knife." So big, it hurts. Who do you think you are, Benjamite -- inspired or something?