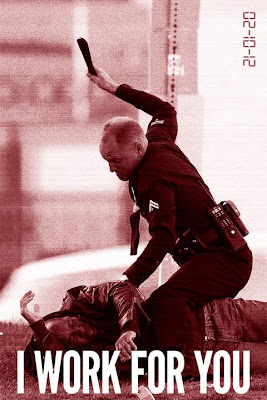 The LCMS Council of Presidents (COPs) have often been referred to as the "8th Commandment Police," which is a nickname that only slightly edges out the other nickname by which they are also affectionately known: the "Blogging Police."

They have come to be known by these nicknames because some of the COPs have often issued missives, either in written or oral form, decrying what they deem to be crass violations of the 8th Commandment among the Lutherans they serve, especially within the crotchety realm of the Lutheran blogosphere. In fact, word has it that portions of COPs meetings have been devoted to addressing this issue, so concerned are some who belong to that high and venerable Council about this.

But, one wonders where the COPs are now? Some of their own venerable members have taken a liking to trampling all over the 8th Commandment lately, but not a peep of concern has been heard (at least, publicly) from any of the other members. Strange, that. Even stranger is the fact that those intent on setting the 8th Commandment aside in the attempt to score political points are among the loudest voices on the COPs decrying 8th Commandment violations, especially in the Lutheran blogosphere.

I guess the lesson we are to learn from this is that the COPs are above reproach. What is good for the goose is not good for the gander, since not all geese are equal in our synod. The 8th Commandment simply doesn't apply to certain Geese, who reside in certain, plush District offices. They are above the Law (hey, wasn't that a Steven Seagal movie?). For them, the end justifies the means. If the 8th Commandment must be obliterated in order to accomplish some self-perceived "higher good," so be it.

The first member of the COPs to forsake all sense of decency and use the power and resources of his office to do some dirty electioneering was Paul Linnemann, District President of the Northwest District of the LCMS. He sent out an email to voting delegates in his District to tell them about the two distinct paths he has witnessed forming in our synod. It is obvious to anyone reading his email that he is a big fan of the second path he describes, which, according to him, is being trod by his fellow District President, David Maier. It doesn't take a rocket scientist to figure out that Linnemann sent this email out to voting delegates in his District to campaign for Maier. And, if one didn't know any better, one might be swayed by what Linnemann writes, for golly gee willickers, who would want a synodical president like Matt Harrison, who is "seeking to concentrate the activity and authority in the church in the office of pastor," and who doesn't want to engage the culture in which we live with the Gospel, but follows "a paradigm of limitation"? I mean, Harrison sounds like a big, fat jerk, especially when compared to how Linnemann describes Maier: "As the leader of the largest District in the LCMS, he has fostered a spirit of collegiality and trust among the people of his District." That sounds wonderful. I'll take two of those, please.

But, Linnemann's distasteful 8th-Commandment-Be-Damned politickin' was rather tame in comparison to the most recent diatribe from another one of the above-the-law COPs, Robert "call me Bob" Newton, District President of the California-Nevada-Hawaii District of the LCMS. There is no subtlety to Bob's campaign email he sent to delegates in his district. He just comes right out and slams Harrison, taking a quote from him in the May issue of The Lutheran Witness completely out of context in the attempt to convince voting delegates in his district that Harrison believes the preaching of the Gospel should only happen within the walls of our churches and be kept "far from the earshot of those who have not yet heard." Yeah, because a) that is an accurate description of the dude who happens to be the first LCMS President to testify before a congressional hearing in D.C., and b) that is totally what Harrison was saying in that article - totally.

Another member of the 8th-Commandment-Breaking 8th Commandment Police Squad, Chris Wicher, District President of the Eastern District of the LCMS, said the heck with sending out an email to voting delegates in his District limited to campaigning for Maier's election as synodical president. He went a step further and sent out a "Missional List" with suggested candidates for many of the elections to be conducted at our upcoming Synodical Convention. I mean, why limit your electioneering to the highest office in the synod when you can use the power and resources of your District office to go ahead and endorse a whole slate of candidates?

So much for fearing and loving God so that we do not tell lies about our neighbor, betray him, slander him, or hurt his reputation, but defend him, speak well of him, and explain everything in the kindest way. There's an election at stake here! We cannot let something like the 8th Commandment get in the way of our very important campaign. The future of our synod depends on this, after all! Harrison must be ousted. If we reelect him, he might pass some edict from on high which prevents us from ever saying anything about Jesus anywhere at any time, except within the confines of our churches, of course.

What a joke these men and their letters are - a disgraceful, disgusting, sickening joke! And, what hypocrisy! The "8th Commandment Police" doing such violence to the 8th Commandment themselves is like the corrupt cop who takes money from the mob, but pretends to be a cop on the up-and-up, or who, like in the pic above, claims to protect and serve citizens, while using every opportunity he can to beat the crap out of them in the name of performing his duties.

Not all cops are corrupt, of course. Neither are all COPs. Which is why it surprises me that none of the other COPs have issued public statements of concern over the unprecedented and disgraceful electioneering of their brother COPs. Will none of the other COPs speak up in defense of Harrison's reputation being damaged by these renegades? Is this just the preview of things to come in future elections, where the COPs will become the political activists in our synod, using the power and resources of their District offices to disparage other COPs in order to campaign for their preferred candidate?

I wonder how these renegade COPs would feel about President Harrison sending out an email to all the delegates in their Districts prior to their own elections in a couple of years, campaigning against them by twisting their words, misrepresenting their positions, and endorsing one of the candidates running against them. Oh, wait, never mind. These guys believe that what is good for the goose is not good for the gander, as mentioned above. They would most certainly cry "Foul!" were someone to have the audacity to send their delegates an email campaigning against them, just as they decry all the 8th-Commandment-Breaking in the Lutheran blogosphere, but have no problem breaking it themselves.

Of course, these renegade COPs have nothing to worry about here, as President Harrison wouldn't stoop to their level and use the power and resources of his office to actively campaign against them in their own Districts. I think they know that, which is why they don't fear putting aside all decency and engaging in such disgraceful electioneering. But, can't any of the other COPs chime in and call these renegades out on their despicable behavior?

And, what is the theme song for these renegade COPs? I think it's something like:

These are a few of your Ecclesiastical Supervisors, O Lutherans. Kind of changes the meaning of "ecclesiastical," doesn't it?

UPDATE: Since posting this yesterday, it was pointed out that the Florida-Georgia District had sent out a campaign letter, which you can read here. So, for those keeping score at home, please add that district to the list of those engaging in shameful and disgraceful electioneering.
Posted by Rev. Thomas C. Messer, SSP at 12:06 PM

I suppose we could all send letters to the COP expressing our concern about this issue. That ought solve the problem.

I have a vision of the DP's in question coming out after such letters gently rebuking them & saying in perfect Jimmy Swaggert style, "I have sinned!"