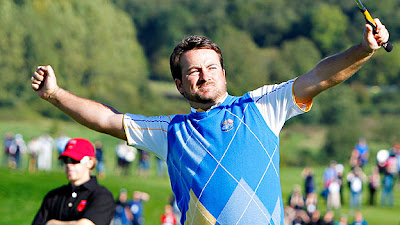 The Americans put forth a valiant effort this morning, but fell a 1/2 point shy of retaining the Ryder Cup  (Final:  Europe 14 1/2  USA 13 1/2).  Heading into the singles' matches today, they were three points back, so they had a tough road to hoe.  But, they had so many opportunities not only to make up that ground, but to put the Europeans away.  Cink had a golden opportunity to gain a full point, but missed a makeable putt to halve his match, and Furyk was in the perfect position to steal a half point from Donald, but chunked his 124-yard, middle-of-the-fairway, approach shot into the front bunker.  If either of those guys come through, the Americans retain the Cup.  But, even with those early missed opportunities, the Americans still had a chance.  Rookie Ricky Fowler completed an unbelievable comeback by sinking a curvy 15-footer on 18 to halve his match (he was 3 down with 3 to play).  That meant that it came down to the last match, which saw America's Hunter Mahan down 1 to Europe's Graeme McDowell with 3 to play.  All Mahan had to do was win one of the last three holes and America would have retained the cup.  But, it wasn't meant to be.  McDowell (pictured celebrating above) sunk a lengthy birdie putt on 16 to go 2 up with 2 to play, and finished it off on 17 when Mahan succumbed to the pressure and left his drive into the par-3 short, and then duffed his chip to dash all hope.  It was painful to watch.  But, hey, as I said, it was a valiant effort.  And it was one of the most exciting Ryder Cups in history.  Rarely does it come down to the final match, as it did today.  And, at least the big boys showed up today.  Woods and Mickelson both won easily and decisively.  Woods went 9-under in the 15 holes he played in his match.

So, disappointed that the Americans couldn't pull it off, but, as a golf fan, happy for such an exciting Ryder Cup.  Enjoy it while it lasts Europe, 'cause we'll be taking that back from you at Medinah in a couple of years!
Posted by Rev. Thomas C. Messer, SSP at 11:17 AM