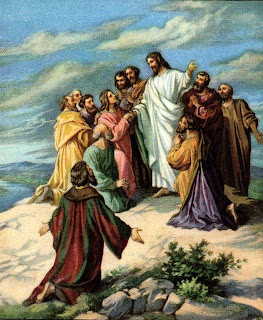 Over at his blog, Brian Yamabe has written an excellent response to a comment made below in my post about the coffeehouse "mission."  He is exactly right.  How often do we hear the so-called "Great Commission" reduced to the short exhortation "Go and make disciples of all nations"?  This is often followed by an urgent plea for us to "get out there and reach the lost for Jesus."  And, in recent times, the idea has been heavily promoted by many in our synod that we are fulfilling the so-called "Great Commission" when we tell people about Jesus, or, to use the terminology popularly bantered around, when we "share our faith."  Heck, we even have a "Great Commission-fulfilling" counter on our synodical website, which ticks one ahead each time someone reports that they've "shared their faith" with another.

As Brian notes, our response to those who reduce the so-called Great Commission in this fashion should be, "Finish the sentence!"  Jesus doesn't just tell us to go and make disciples of all nations.  He tells us how that is to be done - through Baptism and catechesis.  Not only that, but Jesus is speaking here not to every Christian disciple, but to the eleven apostles.  He has established the Office of the Holy Ministry to be the Office through which He would make disciples for Himself using the means of grace He has established.  He calls and ordains these first eleven men, and all whom He calls and ordains after them, to serve in His stead and by His command.  Not only do many forget to "finish the sentence," but they also forget to pay heed to the verse which comes before this one, where our Lord says, "All authority in heaven and on earth has been given to me."  It is by Christ's authority, which He exercises through the Office He establishes, that disciples are made.  And, while we're at it, let's not forget the conclusion of verse 20, too, where our Lord says, "And behold, I am with you always, to the end of the age."  I think that's kind of important.  His "being with them" goes along with "all authority being given to Him."  Disciples are made in His way, not ours.  He is with His called and ordained servants when they Baptize and catechize and preach and distribute the Holy Eucharist.  There's His promise.  There's His guarantee.

And so, contrary to popular belief, Jesus is not telling these men to go out and do "whatever it takes" to make disciples.  Neither is He telling them to come up with creative ways in which they can make disciples - you know, like opening coffeehouses in the name of Christian mission.  No, He leaves nothing to chance or imagination, but clearly reveals how disciples are to be made, and by Whose authority they are made.

I know this runs contrary to how many confused people think today.  I'm sorry about that.  But, maybe - just maybe - if we start catechizing people properly about what the so-called Great Commission really entails, they'll stop living under the delusion that they're fulfilling it when they "share their faith" with others and begin following the example of Philip, telling others to "come and see" the Christ where He promises to always be about the business of fulfilling it via the means of grace He has established.  That'd be kinda cool, I think.

Pr. Messer,
Thanks for the kind words and thanks for looking over my shoulder. It's comforting to know I haven't swerved off into gross error (Always a concern when I start thinking on my own).
---Brian

The Great commission, even if given only to the eleven is necessarily and logicaly perpetual.
One can not escape the logical and continual thrust of the passage itself. While given in in context to the eleven, its intention is necessarily broader in scope than 22 original ears which heard it. It is universal in the sense that every disciple is to become a disciple maker. The disciples are commissioned to teach the new disciples to keep what Jesus commanded which includes the command to make disciples.
If anyone can show me how to logically break the perpetual thrust of the Great Commission, I would like to see it.

Who said that the so called Great Commission is not perpetual? Disciples will perpetually be made in the manner our Lord describes until He returns in glory on the Last Day.

And, yes, our Lord is speaking to more than the 22 original ears of the eleven apostles. He's speaking to all those whom He will call and ordain into the Office of the Holy Ministry throughout the New Testament era; those who will serve in His stead and by His command, baptizing and teaching all that our Lord commands.

Your statement "every disciple is to become a disciple maker" is simply not there. First, it is not the eleven who will actually make disciples, but the Lord who will do so through the Word and Sacrament Ministry He bestows to them (All authority in heaven and on earth has been given to Him). Second, this Word and Sacrament Ministry is not given to "every disciple," but to the eleven apostles (i.e. "sent out ones") and to those who follow in this Apostolic Ministry, as already mentioned.

Now, we can say that all disciples play a role in fulfilling the so called Great Commission, in that all Christians are called to confess their faith when and where the Holy Spirit gives them opportunity, pointing others to where Jesus promises to be with us always to make disciples through His Holy Word and Sacraments. But, it does not follow that the so called Great Commission is given to every disciple. Contrary to popular belief, Holy Scripture does not teach that "every disciple of Christ is a Minister," as you seem to imply with your comments here.