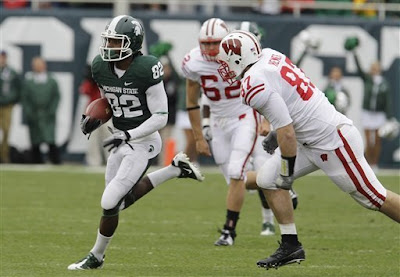 With Coach D re-hospitalized due to a blood clot found in his leg, Sparty had a huge challenge put before them yesterday as they faced #11 Wisconsin.  But, they passed that test with flying colors.  Overcoming three early turnovers which led to 10 Wisconsin points, the Spartans still managed to outgain the Badgers and take a 20-10 lead into halftime.  Then, after Wisconsin made the score 20-17 in the 3rd quarter, MSU drove the ball down the field with relative ease only to get stuffed on a 4th-and-goal inside the 1-yard line.  That could have changed the momentum in the game, but Sparty's defense came through, forcing a three and out and giving the offense good field position and a chance to redeem themselves.  They did, marching down the field again and scoring the touchdown they failed to score a few minutes prior, giving them a ten point lead again at 27-17.  After the Badgers scored early in the fourth to pull to within three again at 27-24, the Spartans put together a terrific drive, taking nearly eight minutes off of the clock, before they were faced with another 4th-and-goal inside the 1-yard line.  I love that they went for it (after getting the okay via a text message from Coach D, of course), and that they had the confidence to run the play they did, which was a play-action pass from Cousins to Cunningham for the TD, which put the game away.  Final score:  MSU 34  WIS 24.

It was a solid victory over a very good Wisconsin team, one in which the Spartans dominated every stat, except turnovers.  If they can play with the same controlled emotion next week in the Big House, I like their chances to make it three in a row over the other team from our state, whose name we don't mention 'round these parts.  That team squeaked past Indiana yesterday, 42-35, also moving to 5-0 (but, that team and Indiana were both 1-7 in Big Ten play last year - just sayin').  I'm sure that team's Heisman hopeful, QB Robinson, will make some plays next week, but if they plan on allowing him to carry the full load (as they've done for their first five games), I think they're in for some major disappointment.  The game is already being billed as "The Player vs. The Team."  I'll take "The Team" over "The Player" any day of the week.  Of course, this is college football we're talking about, so anything could happen.  That team could blow the Spartans out, or the Spartans could blow them out, or it could turn out to be the usual close, grinding, tough game we have witnessed for the past several years in this rivalry of rivalries.  We'll see.  Whatever the case, I am thrilled with how my Spartans have responded to adversity early in this season.  They are playing at a high level.  The defense has fixed a few early problems and the offense and special teams are running on all cylinders.  If they can keep it up, this could be a dream season for those of us who "bleed Green."  But, as Coach D would remind his players, "one game at a time."  All attention on that other team from the state.

Hail to the victors valiant! Hail to the conquering heroes! Hail! Hail! To Michigan, the champions of the West! :)