An Unpublished Letter to the Editor 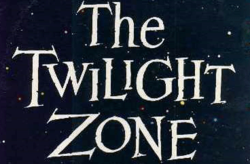 I wrote the following letter to the editor of our local newspaper back on March 27. It was written in response to an article written by one of the paper's regular columnists, Les Rosan, titled "The Twilight Zone." After sending it to the editor and not hearing anything for a few days, I emailed him to inquire about it and was informed that they were going to get it in. But, it's been over two and a half weeks now and it has neither been published nor have I heard anything further about it. Don't know what happened. Perhaps it just got lost in the shuffle, or they simply couldn't find room, or they just decided that they didn't want to publish it. Don't really care at this point. But, since I did take the time to write it, and since this is my blog and I have full editorial superpowers here, I thought I'd post it here. :)  So, here it is (you should read the article to which I'm responding, linked above, first, though):

Letter to the Editor
March 27, 2012
“Reality Is Calling, Mr. Rosan”
I can understand why Les Rosan feels like he is living in “The Twilight Zone.” When you spend your time on websites like www.politicususa.com, you truly have entered “the dimension of imagination.” I spent a little time surfing that website after reading Mr. Rosan’s article and I am convinced that those people are living in a “fifth dimension beyond that which is known to men” – very Twilight Zone-ish, indeed. Scary stuff!
Luckily, I was able to exit that imaginary dimension simply by clicking on the X in the top, right corner of the page and leaving the site. Pshew! But, before I did, I took the time to actually do a little research into some of the pro-life legislation propagandized on that site under the tab, “The War on Women,” and found that the actual proposed legislations do not even come close to matching the descriptions and summarizations found on the site, which are echoed in Mr. Rosan’s piece. Evidently, doing a little research and arriving at actual facts is taboo in the “fifth dimension.” You can check this out for yourself. That’s the thing about living in the “Age of Google”; you can actually locate and read for yourself the pieces of legislation mentioned on sites like this and compare them to the wildly inaccurate spin that is spun in the “Land of Imagination.” Or, you can just drink the Kool-Aid served in the “middle ground between light and shadow,” as Mr. Rosan does.
When you imbibe of the Kool-Aid served in the “Twilight Zone,” you will continue to employ the 1973 argumentation that abortion-on-demand is about providing women protection under the law to make “medical decisions about their own bodies.” Medical science has proven this to be patently false, but when you are trapped in the “fifth dimension,” reality is an elusive critter. The truth is that most pro-abortion advocates have moved on. They know that what resides in a pregnant woman’s womb is a human being with his/her own body and unique DNA, and that the “woman’s body” argument can no longer be taken seriously (except by those who dwell in that other realm, that is). For this reason, they have had to craft a new argument to justify the killing of human beings in the womb, and that new argument is known as the “Personhood” argument.
In sum, the “Personhood” argument goes like this: Yes, what resides in a pregnant woman’s womb is a unique human being, but that unique human being is not yet fully developed and, thus, cannot yet be considered a “person.” It is, therefore, permissible to kill these human beings who are not yet “persons.” That is the new argument, folks. Those who continue to linger in the elsewhere dimension Mr. Rosan calls home need to get with the times. Reality is calling.
Pro-life advocates have responded to the “Personhood” argument by pointing out that, if you take this argument to its logical end, then it should be permissible to kill human beings long after they’re born, since they do not make their entrance into this world fully developed. A newborn baby is not fully developed. Neither is a two-year-old or thirteen-year-old, etc. How can it be said that a newborn baby is a “person,” but a baby three or six or eight months along in the womb is not? It cannot. To say that is lunacy.
Picking up on this, two bioethicists from Australia published an article in the Journal of Medical Ethics last month titled, “After-Birth Abortion: Why Should the Baby Live?” They argued that, wherever abortion-on-demand is accepted, it should also be legal to kill newborns, since there is no difference between a fetus and a newborn. Both are human beings, but neither are “persons,” for neither is fully developed and they both share the same “moral equivalency.” The scary thing is they’re right. You cannot argue for abortion-on-demand and against what they call “after-birth abortion” without putting logic aside.
You probably did not hear too much about this, as most media outlets in our country steered clear of it. You certainly are not going to hear about it on the websites Mr. Rosan frequents and uses for his sources – in fact, I searched the website mentioned above and not a peep about this article, which was published in a publication highly renowned in the fields of science and medicine, was found. But, that’s to be expected from those in the “fifth dimension,” where abortion-on-demand continues to be lauded as the grand protector of “women’s rights,” where all who argue against it are depicted as crazy, “religious fanatics” and “women-haters,” and where pro-life women are not considered “real women,” because, in the “Twilight Zone,” you can only be a real woman if you favor killing babies.
Reality is calling, Mr. Rosan.
Rev. Thomas C. Messer
Peace Lutheran Church
Alma, MI
Posted by Rev. Thomas C. Messer, SSP at 9:03 PM