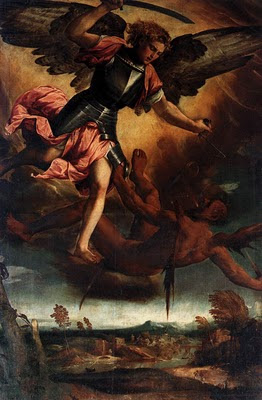 to have Mary back at the organ this morning for Divine Service as we celebrated the Festival of St. Michael and All Angels.  We were without an organist three of the past four weeks, as she underwent, and has been recovering from, shoulder surgery.  The first week, we spoke the whole Service, including the hymns, which was fine, but just not the same as singing the liturgy and hymns.  The second week, we were blessed to have Karen, who is the organist at our sister (actually, mother) congregation in Wheeler, fill in, which was wonderful.  The third week, the choir led us in singing the liturgy and hymns a capella, which was beautiful, but still not the same as having organ accompaniment.  Last week, we employed The Concordia Organist for the first time ever, which we were able to purchase thanks to a couple of generous donors.  We had a few kinks in the beginning, but things went fine for the second half of the Service, although it would definitely take some getting used to were we to use that resource on a regular basis.  But, today, with Mary back at the organ, it felt like being back home again.  Truly wonderful.  And, to have her return for the Festival of St. Michael and All Angels was all the more special.

If you and your congregation are blessed with a faithful, dedicated, Lutheran organist, who loves the liturgy and hymns and desires to play them to the best of his/her ability, and to the glory of God, do remember to thank him/her often.  Such organists are a true treasure to Christ's Church, and are, sadly, becoming rarer and rarer these days.

At my home congregation there was an organist, now sainted, who would always instruct admirers to give the glory to God, rather than thanking him or glorying in his skill. I admire that principle, though I have to admit that in my weakness I simply respond with "thank you" rather than such piety.

That's not to say that an organist (or any Christian using their talents to the glory of God, for that matter) should feel guilty for thanking a well-intended complement. But it is rather easy for organists to get puffed up and think we are the center of the worship world. However, it is God who is giving His gifts to the congregation during the Divine Service, not the organist. In a way, the organ is just another "voice" through which the Word may be conveyed - and even less than a voice, in reality, since the sung words come from the congregants themselves.
So don't let us organists get too full of ourselves. :) At the same time, a word of encouragement (even if - or perhaps especially so - we made a couple of mistakes) can go a long way. And, especially if your organist plays at more than one congregation, it will let them know that this congregation appreciates their effort; if a congregation doesn't seem to appreciate an organist, there are plenty of congregations out there looking for one.