Four in a Row! 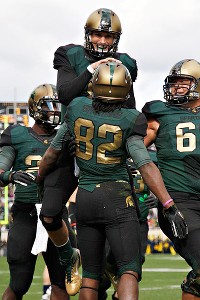 In case you missed it, my Spartans extended their winning streak over that other team in the Big 10 from our state, whose name we do not utter 'round these parts, to four.  Yeah, that's right - four in a row.  That means that the Spartan seniors have never lost to that other team, while that other team's seniors have never beaten us.  Gotta love it! :)  Sparty handled the other team with relative ease on Saturday.  The game really wasn't as close as the final score, which turned out to be 28-14.  Sparty had several dropped passes, two fumbles on big runs, and several bonehead penalties, which allowed that other team to stay in the game.  I hope Coach D works on fixing these mistakes this week, as we have Wisconsin coming in for a huge Saturday night game this week, and we won't be able to afford such things against them.

Our defense is stronger than it's been in a long time, our offense can be really good, but needs more consistency, and we've been holding our own on special teams.  We'll see where we're at after Saturday's huge test, but we're all alone at the top of the Legends division and control our own destiny at this point (and, having defeated conference foes Ohio State and that other team from our state, we own tie-breakers against them, so we're in a great position to win our division and get into the first-ever Big 10 championship game - we could be seeing a preview of that game this Saturday night).  Exciting times to be a Spartan fan, for sure.


GO GREEN!  GO WHITE!
(Not sure how I feel about the new "Nike Pro Combat" uniforms they debuted Saturday - being the traditionalist I am, I don't like them that much; but, they did defeat that other team while wearing them for the first time, so I like them a lot - so torn :)
Posted by Rev. Thomas C. Messer, SSP at 3:10 PM