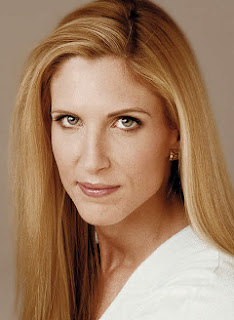 A FB friend alerted me to this column by Ann Coulter posted on her website a couple of days ago:  "The Flash Mob Method of Scientific Inquiry."  I don't always agree with Ann, and certainly her rhetoric can be a little over-the-top, but she nails it in this column.  It has been frustrating and perplexing to see the ignorance surrounding evolution on full display in the media the last several years.  I believe Ann is right about Chris Matthews, namely that he doesn't have a clue what evolution really is.  He's not alone.  This is the case with the vast majority of those who cling to this false theory and use it as a litmus test to determine whether or not political candidates are "intelligent" enough to stand for office.  The game is played thusly:  Evolution is treated as an irrefutable, scientific fact and anyone who will not acknowledge it as such is ridiculed as an ignorant, crazy person.  Bill Maher has been playing this game for years.

But, Ann reveals in this column the inconvenient truth that is cleverly hidden like the dirty little secret it is by those who play the game, namely that they have no clue what they're talking about.  That's why, as Ann reveals, you never hear them actually arguing their case.  They simply declare anyone who does not believe in the Darwinian theory of evolution crazy, and move on, as if their declaration settles the matter.  It's a neat game they play, and everyone should easily see right through it and recognize it as nothing more than a game, but sadly many do not.  In much the same way that Hollywood has managed to change the American mindset regarding homosexuality by making sure to represent homosexuals in the story-lines of virtually every show produced the last several years, giving the impression that the percentage of homosexuals in our society is far greater than it actually is (studies show that it is still less than 3% of our population), and implying that it is nothing more than an acceptable, alternative lifestyle, the liberal politicians, media personnel, celebrities, and academics, have managed to convince many (if not, most) Americans that evolution is fact, not theory, without even attempting to provide arguments or "facts" to back up their claim.  It's all rather amazing to behold, really.

It reminds me of the encounter I had with a college science professor many years ago.  She kept referring to the theory of evolution as if it was an unquestionable fact.  I kept reminding her that it was a theory, not a fact.  After a few weeks of me getting on her nerves, she asked to speak to me privately after class one day.  We went to her office and had a conversation that I doubt I'll ever forget, since, during the course of our conversation, she made it clear that she really had no clue what the theory of evolution is.  She had never read Darwin's, "The Origin of Species," couldn't recount the different laws of thermodynamics, had trouble articulating the difference between micro- and macro-evolution, and just outright butchered Darwin's position on natural selection.  At that time, having been a passionate student of the Creation vs. Evolution debate, which involved reading many books from both sides of the aisle (I even made the painful trek through Darwin's "Origin"), it was clear that I knew a ton more about evolution than she did.  How she managed to get a degree and find herself teaching science at the college level is a mystery.  In any event, when it became clear to her that she was not just dealing with some religious kook, but with someone who had studied this matter intensely, she ended our conversation rather abruptly.  But, she also did back off on the comments she made in class and never gave me a problem again.  So, at least something came of it. :)

Anyway, the only reason I include that little trip down memory lane is because I do believe it relates to the point Ann makes in her column.  The dirty little secret about evolution is that the ignorance runs even deeper than the game played by popular liberals in the media - it is found in academia as well.  And, I don't base this simply on the single encounter with the college professor shared above, but on what I have seen and heard from elementary and high school teachers, and other college profs, over the years.  Many (if not, most) who end up teaching Darwin's theory of evolution do not really know and understand what it is.  My theory for why this is the case is simple:  They are not taught Darwin's actual theory of evolution, but an abridged and edited version of it.  And my theory for why this is the case is simple, too:  Scientists have long known that Darwin was wrong on many points.  That's the dirtiest of the dirty little secrets on this issue, dirtier than the ignorant game-playing we see everywhere today.  In fact, as Ann also rightly notes in her column, the fact is that, according to Darwin himself, his theory should be completely cast aside, for he himself made clear that if future scientific discovery proved certain aspects of his theory false, the whole theory should be canned.

Thus, the inconvenient truth for those who continue to ignorantly cling to Darwinism is that science has proven the theory false.  That's also the irony in the ignorant game-playing being done.  Those playing the game do so in the attempt to reveal the ignorance and craziness of their opponents when, in reality, their blind, ignorant adherence to a theory they do not understand, which their "god," named "science," has proven false, is truly ignorant and, I might add, a little on the crazy side.  As Ann notes:  "If Darwin were able to come back today and peer through a modern microscope to see the inner workings of a cell, he would instantly abandon his own theory."

This is most certainly true.  A single cell is so complex (containing an intricate machine with precise gears, etc.) that we do not possess the math to calculate the odds of it coming into existence by chance.  In fact, it is quite appropriate to say that it would be impossible for a single cell to develop by chance, given what science has revealed to us, which really leaves us with two choices:  1) There is a Creator, or 2) Aliens from a distant universe sent living cells to Earth way back when.  Of course, if you opt for the second choice, you are left to try to explain how it is that that Alien civilization came into existence.  But, hey, at least you will avoid being labeled ignorant and crazy for believing that there is an Almighty Creator responsible for the origin of all things (Oh, the ignorance and craziness of such a radical belief!).  Or, you could opt for the third choice with the vast majority of liberals today, which is really not a viable choice given what science has revealed to us - just ignore the evidence and go on pretending like what has been proven false is fact and label everyone who believes otherwise ignorant and crazy.  If you're adamant enough about it, you might even get your own TV show, after all!  Reminds me of this: 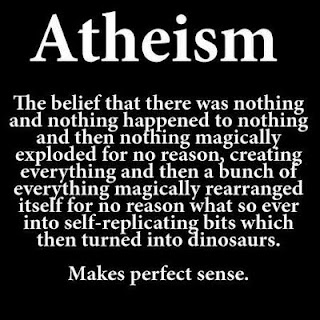