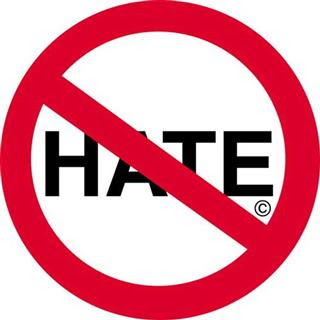 I just want to know if you're a Lutheran.  That's all.  Quit responding with, "Why you hatin', playa?"  I'm neither hating nor playing.  I'm actually trying to have a serious conversation with you about what it means to be a Lutheran, and trying to determine, in the course of that conversation, whether or not you are a Lutheran.  I'm sorry, but I'm not convinced that you're a Lutheran simply because you say, "I'm a Lutheran."  There are many people out there who claim to be Lutheran, but are not.  You know that as well as I do.  That I'm not convinced that you are Lutheran simply because you claim to be has nothing to do with how I feel about you personally.  If you're not a Lutheran, that doesn't mean I hate you.  I have many non-Lutheran friends and acquaintances.  I don't hate them.  Lutherans are not haters.  They are serious about their confession of the faith.  They are zealous about maintaining that confession and passionate about defending it.  But, they're not haters.

So, why do you keep resorting to playing "the hate card"?  I just want to know if you're a Lutheran.  And the reason I want to know is because, if you are a Lutheran, then my being a Lutheran is called into question.  Why?  Because, well, we define Lutheranism differently.  You define it one way, I define it another way.  We both can't be right at the same time.  Either you are right and I am wrong, or I am right and you are wrong - or, we're both wrong.  That's why we're engaged in this conversation, to determine who's right and who's wrong, or whether it may be that we're both wrong.  I know that's not a popular idea in our politically-correct, still postmodern, day and age, where truth is relative and contradictions are ignored.  But, we're operating from the principle that there is truth and there is falsehood.

One of the reasons I am calling your claim to be a Lutheran into question is your continued insistence that I must simply trust you when you say, "I'm a Lutheran."  And then, when I won't simply trust you, but press you to back up your claim, you accuse me of being mean, hateful, and even of "tearing the Kingdom down," whatever that's supposed to mean.  Lutherans do not operate this way.  Lutherans do not resort to saying, "Hey, just trust me."  Instead, Lutherans are always ready, even eager, to confess what they believe and why they believe what they believe.  Lutherans are the "This is most certainly true" and "Here I stand" people.  Thus, it is odd, and rather suspicious, for you, one who claims to be a Lutheran, to expect me to simply trust you.  I don't.  Neither do I expect you to simply trust me.  That's just not the Lutheran way.

Another reason I am suspicious of your claim to be a Lutheran is that you keep telling me to mind my own business, as if I am out of bounds for having concerns about what I hear you saying and see you doing in public.  Again, Lutherans do not operate this way.  Lutherans are confessional, and they realize that what they say and do in public confesses what they believe.  Lutherans are happy to have their public confession questioned and examined, for this gives them the opportunity to explain and defend their confession, and, if need be, to accept the admonishment of their fellow Lutherans to bring their public confession back in line with what Lutherans believe, teach, confess, and practice.  In other words, Lutherans want to hear what their brothers and sisters have to say about what they're saying and doing, for Lutherans are always interested in confessing the truth in word and deed.  Thus, it is odd, and rather suspicious, for you, one who claims to be a Lutheran, to tell your fellow Lutherans to mind their own business and leave you alone.  If you really are a Lutheran, then what you say and do is the business of your fellow Lutherans.  It really seems as though that should go without saying.

Still another reason I am suspicious of your claim to be a Lutheran is the claim you keep making that doctrine and practice need not go hand in hand.  That's not a Lutheran idea.  Lutherans believe that doctrine and practice do go hand in hand.  Lutherans practice what they believe.  Lutheran practice is Lutheran doctrine in action.  It cannot be otherwise, for to be otherwise is to forsake the confessional nature of Lutheranism, which bears itself out not only in words, but also in deeds.  Lutherans are not fundamentalists.  Our Lutheran Confessions cannot be reduced to some neat list of core doctrines to which we adhere, for they not only confess what we believe, but how we put our beliefs into practice.  Thus, it is odd, and rather suspicious, for you, one who claims to be a Lutheran, to insist that your Lutheranism is not affected by your employment of non-Lutheran practices, especially when those practices come from those whom our Confessions condemn.

I could continue rambling on here, but the main point I want to drive home is that I don't hate you.  It is actually out of love that I am discussing things with you.  And, please remember that you are the one who has put out for public consumption the things which have prompted our conversation.  It is not as though I am some sort of "heresy hunter," out there searching for the next Lutheran to devour, and it is completely unfair for you to claim, or imply, as much.  The things you're doing were brought to my attention because you put them out there for the world to hear and see.  Why should you be surprised, shocked, or amazed to receive a response to what you're saying and doing?  Shouldn't you expect as much?  And, as a Lutheran, shouldn't you be more than ready and willing to explain your words and deeds to fellow Lutherans who have concerns about what they hear and see you doing?  Playing "the hate card" and refusing to explain your actions to your fellow Lutherans is the real hateful behavior.  I mean, to write your brothers and sisters in Christ off as "haters" without answering their concerns, no matter how passionately they've expressed their concerns, is not a very loving approach.  Neither is it very Lutheran.  Which is kind of the point.

I don't hate you.  I just question whether or not you are Lutheran.  If you are, show me.  If you're not, maybe you should just admit it and prayerfully consider whether or not it is good for you to go on pretending as if you are.  But, even if you're not really a Lutheran, but insist on continuing to call yourself a Lutheran, I still won't hate you.  I may not respect you as much as I do those who align themselves with those with whom they are really in fellowship, but I won't hate you.  How could I?  You confess Jesus as Savior, just like me.  We were both marked and redeemed by Christ the Crucified.  Hate?  No, I love you.  You're a brother (or sister) in Christ.  And, even if you weren't, I still wouldn't hate you, for my Lord commands me to love even those who are His enemies.

But, that we share that blessed fellowship in Christ does not mean that we share a common confession of the faith.  I don't doubt at all that you are a Christian.  I just have doubts about you being a Lutheran Christian, who subscribes unconditionally to the Book of Concord as a correct exposition of Holy Scripture.  Those doubts come when I hear and see you saying and doing things which appear to contradict what we Lutherans believe, teach, confess, and practice.  And, no, those doubts do not come because I am some fanatical "purist" or "ultra-confessional" or whatever other derogatory term is so often used by many to cleverly avoid discussion and debate.  Besides, if you believe these labels do aptly describe me (or others), then don't just hurl them at me (us) like some rebellious teenager, but love me (us) enough to show me (us) the error of my (our) ways.  That would be the Lutheran thing to do, after all.

Anyway, again, I don't hate you.  I just want to know if you're a Lutheran.  If you are the Lutheran you claim to be, all of this should make perfect sense.  If it doesn't . . . well, that would seem odd and suspicious.
Posted by Rev. Thomas C. Messer, SSP at 5:41 PM

Pastor Messer - I would add one very important Lutheran saying to the two you did list ("This is most certainly true" and "Here I Stand".) To be Lutheran, we must ask "What does this mean" whether it be actions or speech.

I realize the ( )(post)(neo)(whatever)modernist denies objective truth; a Lutheran can not do this as you corrected stated. What these people fail to comprehend is their speech has meaning to other people, both christian and non-christian. Likewise, their actions also have meaning to all their neighbors.

All too often, what is say or done in the name of Lutheranism is simply not - not according to the Holy Scriptures as we have always know them nor is this in accord with the Book of Concord. They fail to comprehend that love is the fulfillment of the Law and the Second Great Commandment is to love our neighbor. The neighbors are listening and watching; is what they hear and see Lutheran?
Peace,
Dennis

Great addition, Dennis! Yes, "What does this mean?" fits perfectly with what I'm trying to convey here, namely that it is not unloving, but loving - and perfectly Lutheran! - to ask what those among us mean by the words and deeds we see them putting forth. And, if we're asking this of Lutherans, they won't tell us we have no right to ask, or to mind our own business, but gladly confess what their words and deeds mean, explaining how they jive with our Lutheran confession of the faith. When that doesn't happen, well . . .

Can you imagine if doctors divorced doctrine from practice?

Dr.: Well, you have chicken pox.

Me: Wow, that explains the spots and itchiness.

Dr.: I'm prescribing chemotherapy for your chicken pox. I realize it isn't what the books say, but I believe that it is the strongest medicine I have!


Or what if judges divorced doctrine from practice?

Judge: You are charged with renovating your home without a permit. How do you plea?

Me: Guilty, I did it and deserve the fine.

Judge: Your sentence is no fine, but life in prison. I know that the book says you should be fined but I think a sterner punishment will teach you a real lesson.


This is not to say that we should look at Scripture and the Confessions as merely books of rules; it should be our joyful desire that everything we say and do would boldly and profoundly confess everything we believe, teach, and confess about Jesus Christ, our Savior!

Thanks for the post, Tom, it is an excellent reminder!
Pax, Jon

People play the "why are you hating" card because they hate the fact that you are pointing out flaws in their thinking... and therefore they hate you.