It's About the Relationship of Doctrine to Practice 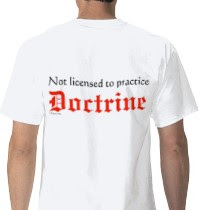 President Kieschnick's report before the convention yesterday morning sounded a lot more like a campaign speech than a report to the synod.  It also sounded exactly like I thought (and predicted) it would sound.  I had heard that he would be attempting to set the record straight on his oft-repeated, and oft-criticized, statement, "This is not your grandfather's church."  And that's exactly what he did.  But, this is nothing new.  He attempted the same thing in his book, "Waking the Sleeping Giant," and I commented upon that in a post a while back.  I won't rehash that now; you can read my thoughts on this by clicking here if you wish.  You can also read an excellent article Pr. Wilken wrote a while back on this subject here.

Anyway, as I watched Pres. Kieschnick's report this morning (which you can watch here or read here - and, hey, if you want the ultimate experience, open the video and the pdf at the same time and read along while you watch!), I was sincerely impressed, as I always am, at the passion with which he speaks.  It's a little over-dramatic for my particular taste, but there is no denying the fact that this man wholeheartedly believes in what he's saying.  I don't doubt his sincerity one bit.  He really, honestly, genuinely believes that the vision he has for the future of our synod is both god-pleasing and completely in line with what our grandfathers would want for our church body.  And, he is very persuasive.  He's a very good public speaker.  If I was Grandma Schmidt watching at home, I might readily stand up and give him a standing ovation at the conclusion of his speech.

I will also say, as I have said in the past, that I consider Pres. Kieschnick a brother in Christ.  He loves Jesus and has an undeniable passion to reach the lost.  I also appreciate very much the many points of doctrinal agreement I do share with Pres. Kieschnick.  He is right about the fact that we in the LCMS do enjoy a tremendous amount of doctrinal unity when compared to other mainline Protestant denominations.  I think he often goes a little overboard in stressing this point, and comes off as boastful when pointing out that we are the "envy of other church bodies," but his point is well taken, nonetheless.  And there is also no denying the fact that he is on the right side of the many social issues we face today, and has done a good job throughout his tenure as president of speaking for our synod on these.

I know how ridiculous that sounds to our postmodern ears, but it's the truth.  It's kind of like the old saying, "You can't be a little bit pregnant."  You is either pregnant or you ain't!

This is where I find an obvious and serious disconnect with Pres. Kieschnick (and those who believe as he does).  He does believe that we can be mostly Lutheran, with a little bit of this or that other thing mixed in.  And this belief is built upon the faulty notion that doctrine and practice need not go hand in hand.  It's the belief that our Lutheran doctrine can be maintained and retained even while we adopt and employ the practices of those whose doctrine is not in line with, and even contradictory to, what we Lutherans believe, teach, and confess.

Recognizing this very serious and obvious disconnect, suddenly the many points of doctrinal agreement often referred to by Pres. Kieschnick no longer seem as wonderful.  Actually, a great many of those points of doctrinal agreement are points shared by conservative Christians of a variety of stripes.  I mean, I have a Baptist friend, who is also a pastor, and with whom I am in agreement on a great many doctrinal points (at least, on paper).  I can rejoice in the areas of agreement we have, but those areas are simply not enough for he and I to be in altar and pulpit fellowship with one another.  Further, while there are many doctrinal points with which my Baptist friend and I claim to be in agreement, it is obvious that, when we flesh out and define what we really believe about those doctrinal points, we are not in agreement.  The same is true within our own synod.  Pres. Kieschnick can create as many long lists of what he perceives to be points of doctrinal agreement among us, but, at the end of the day, when those points are fleshed out and further defined, it turns out that we are not in agreement as advertised.

Now, to be fair, Pres. Kieschnick has readily admitted time and time again that he acknowledges that we have areas of serious disagreement.  He has pointed to the disagreements we have concerning 1) the administration of Holy Communion, 2) how we worship, 3) the role of women, 4) participation in civic events, 5) fellowship with others, etc.  But, where he goes astray is in believing that these areas of disagreement do not affect the doctrinal unity he claims we share.  In other words, from his perspective, these areas of disagreement all fall within the realm of practice and, since he is of the mind that doctrine and practice can be separated, they do not infringe upon our doctrinal unity.  He would say that we need to work toward settling our disagreements, but not because we find ourselves in doctrinal disunity, but rather because it would be better for our synod and give us greater opportunity to reach the lost if we would stop bickering about these disagreements.  For Pres. Kieschnick, the purpose of resolving our differences is not to bring us into doctrinal agreement - we already have that, in his view - but to better enable us to do the mission he believes we are called to do.

With that in mind, the biggest problem our synod faces, from Pres. Kieschnick's perspective, is that we don't get along as well as we should.  But, he (and others like him) fails to realize that the reason we don't get along as well as we should is not because our synod is filled with a bunch of naturally disagreeable people, but rather because we have very real and very serious DOCTRINAL disagreements.  That point is simply lost on him, and we can certainly understand why.  I mean, when you place all of our problems into the "practice basket," which is distinct from the "doctrine basket," then the solution must be that we need to stop arguing about things that do not infringe upon the doctrinal unity we share.  Our real problem then, according to Pres. Kieschnick, is attitudinal and behavioral, not doctrinal.

So, the delegates serving at the convention this week have a very serious decision to make.  Pres. Kieschnick is right in noting that this convention "is a pivotal event in the life of the LCMS" and that the elections and decisions made by these delegates "will determine the direction of the LCMS in the years ahead."  The decision the delegates will have to make boils down to how they view the relationship of doctrine to practice.  If they believe, as Pres. Kieschnick believes, that the two are distinct and need not go hand in hand, then they should vote for him and allow him to continue to lead our synod in the direction he has been leading us for these past nine years.  If they believe that doctrine and practice do go hand in hand, that practice is simply doctrine in action, then "It's Time" to elect a president who shares that belief and will lead us toward serious discussion about the real divisions we suffer, with the Word of God and our Lutheran Confessions guiding us.  That, of course, would be Rev. Matt Harrison.

I, for one, am thankful that Pres. Kieschnick went with the campaign speech he did yesterday.  He made it vividly clear where he stands, and where he stands is not upon the same doctrinal ground our grandfathers stood.  But, I fear that this fact will be lost on many delegates, and that the focus will instead be on the passion with which Pres. Kieschnick made his plea.  I pray that won't be the case.  I pray that the delegates will see through that passion and recognize the real issue at stake here, that it's about the relationship of doctrine to practice.  We'll see . . .
Posted by Rev. Thomas C. Messer, SSP at 3:21 PM

There were a lifetime of blog posts contained in that report.

You got that right, brother!