A few thoughts on Avatar 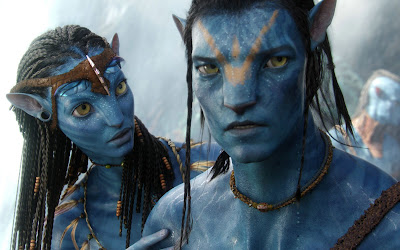 This past Friday, Lisa and I had a "no-kids, date-night" and finally went and saw "Avatar."  Lisa's not a big fan of the Sci-Fi or Fantasy genres, but she was entertained by this film.  I was more than entertained.  I loved it!  I had heard a lot of criticism about the movie, that while it was a special effects masterpiece, it lacked substance and depth to maintain its lengthy running time (almost 3 hours).  I don't think so.  I mean, yeah, it wasn't the most heady of films, requiring intense and focused attention to follow the story, and surely there was some obvious predictability there, but I think it told the story it meant to tell in a substantive way.  I don't think it insulted my intelligence at all, as so many movies coming out of Hollywood do these days (like the other big special effects saga, "2012," that came out last year).  In fact, I would say that this movie had some pretty substantial underlying elements which invited much pondering.

For instance, one of the things I pondered as I watched the film was the history surrounding the way in which we Americans came to occupy the land in which we live.  There were people living here, as we all know, and in many and various ways, we gave them a choice to move out of our way or bite the dust.  It was our "manifest destiny" to occupy this land, and that was that.  And, while we don't like to think about that part of our history, and surely when the subject comes up, much heated debate usually ensues, the fact is that there was a lot of injustice done back then, even as there were those who fought against that injustice.  Whether we want to admit it or not, that same sense of "manifest destiny," which posits that we Americans have some sort of Divine right to do as we please and that the end will always justify our means, continues to guide us in many less than salutary ways.

Along the same lines, another theme that shone through the movie and invites further pondering was the clear allusion to the prejudice and discrimination which has plagued our human race throughout history.  It is a common element among fallen man to be so curved in upon himself that he often cannot see outside of his own perceived reality.  Sinful man is greedy and selfish.  The Old Adam wants what the Old Adam wants, and if getting what he wants comes at the expense of others, so be it.  This also leads to the tendency to look down upon those who are different from us even before any effort is expended to get to know and understand who they are.  How much evil has been done by man throughout history because of race, creed, or nationality?  Sinful man is inbred with a narcissistic superiority which often leads to the performance of the most evil and heinous deeds.

I also couldn't help but ponder the obvious message about the environment which came screaming through this "green-screened" masterpiece (pun intended).  As my friend, Scott Diekmann, wrote recently, the environment has become "America's New God."  I seriously doubt that the depiction of Eywa, the "goddess" worshiped by the Na'vi people on Pandora, akin to "mother nature," was a coincidence.  I think this was director James Cameron's way of doing his part to support the cause, if you get my drift.

I'm sure there are other points to ponder about the movie, and many sub-points to dwell on within those mentioned above, but these are just a few thoughts I had.  I don't think it has gotten a fair shake in the "substance" department.  Whatever the case, I thought it was a great flick.  I'd even go as far as to say it is one of the best movies I have seen in a while.  And I thought releasing it in 3-D was brilliant and added so much more to what was already a very entertaining experience.  I liken it to "Dances With Wolves" meets "Star Wars," and considering that those are two of my all-time favorites, I can't help but love "Avatar."
Posted by Rev. Thomas C. Messer, SSP at 9:50 PM

Master of None said...

Careful Pastor. The Texas School Board Book Committee will get you for such negative speech about Manifest Destiny.