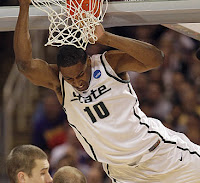 And then there was one - Big Ten team left in the Dance, that is.  The Buckeyes fell to Tennessee, and the Boilermakers were handled by Duke, but Sparty moved on tonight, even without the services of their starting point guard.  And now my Spartans have a chance to punch their ticket to the Final Four without having had to play any team seeded higher than #4 (they beat #4 Maryland last week, #9 Northern Iowa tonight, and will play #6 Tennessee on Sunday).  If they play like they did tonight, they have a good shot to knock off the Volunteers.  Then, they'd face the winner of Butler vs. Kansas State for a place in the National Championship.  They got a real shot here!  But, first things first - let's focus on silencing the "Rocky Top" fans.  Come on, chant it with me: