Contemporary Worship Came from Others 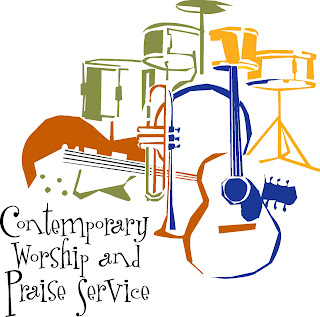 What is almost always missing in our ongoing worship debates is an honest assessment of the genesis of what has become known as contemporary worship among Lutherans.  It seems that many are wont to conveniently ignore the fact that this genre of worship was developed by non-Lutherans who adhere not only to a different theology of worship, but a completely different theological system (different exegetical, different systematic, different historical, different practical theologies).  This did not originate with Lutherans, but came from those whose theology is purposefully not centered upon Christ and the blessed means of grace through which faith in Him is created and sustained, but rather is centered upon man and the experience and enthusiasm created to elicit a decision/response from those in attendance to accept Jesus as their personal Lord and Savior.  In other words, for all attempts to prove otherwise, this genre of worship is not Christ-centered, but man-centered - and PURPOSEFULLY so.

This is because those who led the charge to turn worship into an experiential, enthusiastic, emotional-manipulating, feel-good, fun-fest do not believe Jesus is Present in their "worship experiences."  That's the whole point, the whole basis for this genre of worship.  Jesus is "up there," not here.  We need to reach Him.  We need to let Him know how much we love Him.  We experience His love in return as we feel Him touch our hearts.  And, if the worship is powerful enough, then that experienced love we feel in our hearts will lead us to commit ourselves to Jesus, make Him our personal Lord and Savior, and leave with the intent to live for Him in this world.  It's all about you.  Your feelings.  Your emotions.  Your decision.  Your choice.  Your commitment.  Your life.  Jesus is nothing more or less than the object of your affection and the arbiter of your feelings.  It is little wonder that the vast majority of contemporary Christian praise songs focus on feelings and employ heart-language, since, well, they are simply the subjective experience and shared feelings of their authors put before others in the hope that they, too, will share that experience and those feelings.

You can slice and dice this all you want in the attempt to Lutheranize it, but that dog just won't hunt.  You cannot adopt the practices of those who adhere to a completely different theology and avoid having your confession of the faith marred in the process.  The attempt by so many Lutherans to do this today is not only an exercise in futility, but a sad commentary on how our theology is so grossly misunderstood and unappreciated.  That so many Lutherans are willing to sell their birthright for a cup of "worship experience" is something I shall never fully comprehend.

So it is that the oft-attempted argument in our worship debates that this is not about theology is disingenuous, at best, and malicious, at worst.  I mean, no one can possibly argue against the fact that the contemporary worship adopted by Lutherans came from those who adhere to a different system of theology.  In fact, those who initiated the flirtation with contemporary worship knew this full well.  It was kinda the point at the time.  Those other Christians who worship differently than we do seem to be onto something.  Their numbers are growing and people seem to be really responsive to their way of worship, so let's check that out and see if it's for us.  Besides, we're really getting sick of the whole page 5 and page 15 thing; something new and fresh would be most welcome!

Thus did the first generation of contemporary worshiping Lutherans begin their flirtation with the Church Growth Movement (CGM) and its principles, which find their zenith in man-centered, man-pleasing, experiential, enthusiastic, and entertaining, feel-good, contemporary worship.  This first generation of contemporary worshiping Lutherans knew exactly what they were doing.  Many of them even went and got themselves degrees in "church growth" from places such as Fuller Theological Seminary.  They read all of the classic CGM texts, attended contemporary worship seminars, and set about the business of establishing a new genre of worship among Lutherans.  And this is precisely because they bought into the false theology of those who tickled their fancies and provoked their envy.  They wanted to be like those others, theology be damned.  That's a fact, and it is easily proven, given that we're not talking about some historical era in some distant past, but events which have taken place just in the past 20-30 years.  The advent of contemporary worship among Lutherans in our synod can be traced back to the 1980s.  Yes, there was already some flirtation being done in the 60s and 70s (and there has always been a bit of this ever since there have been Lutherans), but this movement did not begin to gain traction within our synod until the 80s.  So, it is still brand new among us, and it is easy to trace just how it happened to infiltrate our synod, especially since many of those among that first generation of contemporary worshiping Lutherans are still among us, and still making the same arguments they made back when they began flirting with this stuff.

The amazing thing to witness in all this is how the second generation of contemporary worshiping Lutherans among us engage in our ongoing worship debates.  Unlike their predecessors, they are convinced that the genre of worship to which they adhere is Lutheran through and through.  This is a testimony of the first generation's effectiveness in embedding this genre of worship into our life together as a synod.  Call them pioneers or innovators or what have you, no one could possibly deny the success they've had in convincing Lutherans to accept and embrace this genre of worship.  When they began their flirtation, one could hardly find an LCMS congregation that had a contemporary worship service available, but now it has become increasingly difficult to find LCMS congregations that do not have one.  That's not bad for a movement that is only a few decades old.  Those who dreamed of the days when you wouldn't have to attend a methobapticostal worship service to "feel the presence of the Spirit at work" have had their dream fulfilled, and then some, for not only can you find this sort of worship service all around the synod today, but those who have taken up their mantle today are convinced that this is decidedly Lutheran.

But, it is not Lutheran.  That's my point.  That's the point that gets glossed over in our worship debates time and time again, as a plethora of red herrings and straw men are invoked to keep us from getting at the heart of the matter.  Try as they might (and they do try!), the second generation of contemporary worshiping Lutherans will never be able to deny the fact that what they now embrace and falsely believe to be perfectly Lutheran is the warmed-up porridge their predecessors sold their birthright to obtain.  At the end of the day, this is about theology, no matter how vehemently are those who argue to the contrary.

What would be refreshing would be to hear the second generation of contemporary worshiping Lutherans argue their case with the honesty in which their predecessors argued theirs.  They wanted something different.  They believed that we Lutherans needed something different.  They didn't shy away from making that known.  They said things like, "The hymnal does not appeal to unbelievers"; "The liturgy is outdated and turns people off"; "Worship needs to primarily be about reaching the lost, not feeding the found"; "Worship should be fun and entertaining, so that people will long to come"; "We need to change our ways, lest the Church fade away and die"; "Everyone should be a minister," and so forth.  And, they said these things knowing full well that they were saying that we needed to learn from those whose theology differs from ours.  Our theology needed to change.  That was the point.  But, today's generation says all of these things and more, maintaining that, in doing so, they are expressing our theology, refusing to admit that all of these things are based on a theology foreign to ours.

And, for this reason, dialogue is stifled.  How in the world can you have fruitful dialogue with those who refuse to be honest?  When the basis for dialogue is, "We're exactly the same theologically, but just have vast differences in how we express that theology," as if doctrine and practice are as different from one another as night is from day, there is little chance of the conversation going anywhere.  And, that's what we see, time and time again.  The second generation of contemporary worshiping Lutherans have systematized what their predecessors introduced, and the key systematic principle is that doctrine and practice can be neatly kept separated.  Indeed, it is this systematic principle that provides the convenient cover up to the reality which lies underneath, enabling today's generation to live with the fact that their predecessors partook of a theology foreign to ours.  The separation of doctrine from practice is akin to the "pay no attention to the man behind the curtain" ploy used by the wizard of Oz.  As long as that curtain remains in place, there is no dialogue to be had.  And, as long as that curtain remains in place - as long as doctrine and practice are viewed as two separate things - this: 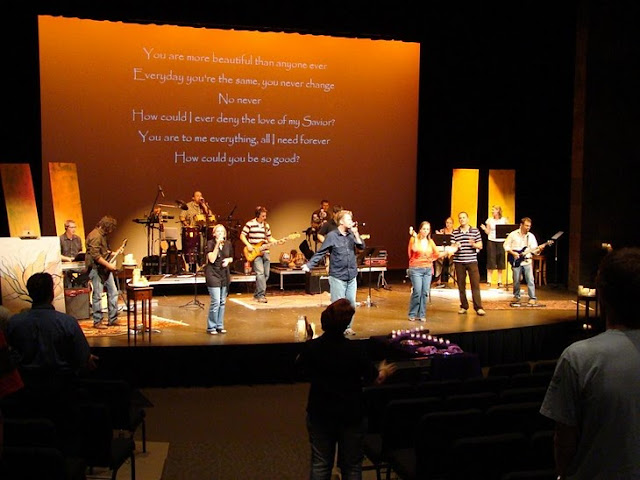 will amazingly be seen as flowing from, and expressing, the same theology as this: 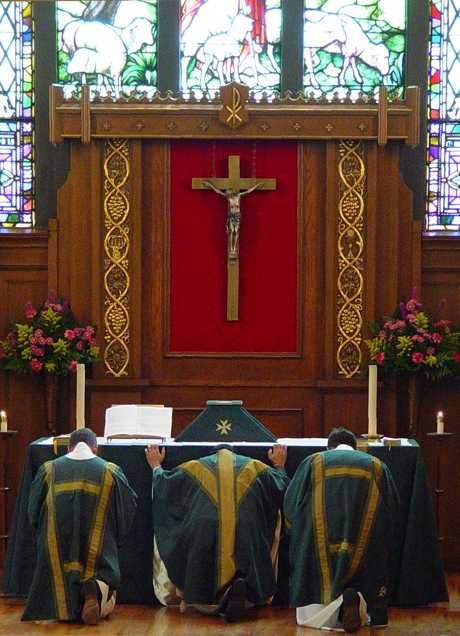 Thanks for this article. Gives me reason to rethink my position on this issue. We are new to the LCMS (Confirmed August 2011). We come from a contemporary worship style church. My wife and I have come to really like the traditional Lutheran service. I really love the liturgy and recognize how much of that is directly from the Scriptures. We don't know many of the Lutheran Hymns but are slowly learning them.

I like contemporary worship but I would not want it to replace the service we now have. I don't think it would hurt anything to have a time where you can worship in this style but not something you do in replace of your Sunday morning worship.