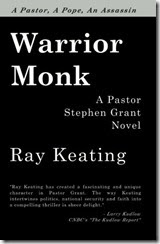 Last night, our newly established Peace Book Club met for the first time, and, I have to say, it was positively delightful.  We discussed the book, "Warrior Monk:  A Pastor Stephen Grant Novel," by Ray Keating, which everyone in the group thoroughly enjoyed reading, and which is a book that lends itself well to much pertinent discussion, especially among Lutherans.  We talked about ecumenism, relativism, secularism, radical Islam, politics, environmentalism, terrorism, torture, parish life and the pastor-parishioner relationship, temptation, the "inside baseball" of the LCMS, which is explored in the book, denominationalism, RC-Lutheran relations/differences, C.S. Lewis, and more.  And, of course, we shared with one another our favorite parts of the book, the characters we loved and hated, and all the other stuff that comes with discussing books as a group.  As I said, it was positively delightful.

We decided that we were going to give each book we read a rating of 1-5, 1 being the lowest, 5 being the highest.  We gave "Warrior Monk" a solid 4, and very much look forward to the next installment in the adventures of Pr. Stephen Grant.

We also decided upon our next book.  Since I have often mentioned C.S. Lewis' "The Screwtape Letters" in Bible Studies and other settings over the years, Sharyn suggested that we make this our next venture, and everyone agreed, since no one has yet taken me up on my invitation to read that classic.  So, "The Screwtape Letters" it is.  And, since some in the group may get through that book fairly quickly (although there is certainly much depth there, to be sure), the additional option of giving Lewis' "Mere Christianity" a read before next we meet was suggested as well, although we will focus our attention on "The Screwtape Letters" for our next discussion.  So, it is C.S. Lewis month for the Peace Book Club, which will next meet on Tuesday, November 22.

Already looking forward to it!
Posted by Rev. Thomas C. Messer, SSP at 11:46 AM

Just saw this, and I am delighted that you enjoyed the book! Thanks and God bless.