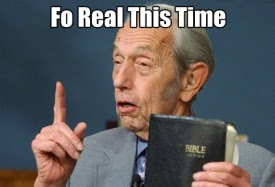 until the secret Rapture of the Church Campingites occurs.  Why is Church crossed out?  Well, because if you belong to the Church, you will not be one of those special persons who gets mystically whisked away and secretly vanishes from the face of the earth tomorrow at precisely 6:00 p.m. (oh, and don't ask which time zone - somehow the Lord will work it out so that it is magically 6:00 p.m. at the same time all over the world, or something like that).  Sorry.  If you believe in Jesus and belong to His Church, you are doomed.  You must believe in the Prophet Harold Camping and his prophecy to be one of the select few to get a seat on the Secret Rapture Carpet Ride tomorrow.  As for me, I think I'll stick with Jesus and His Church (you know, the Church about which He promises that nothing shall prevail against, not even the gates of Hades, or the prophecies of a deranged lunatic).  I'll stick with the Word of God, rather than the word of an obvious false prophet, the Word that assures me that Jesus lived the perfect life in my place and paid for all of my sins on the Cross and rose again from the dead on the third day to open to me and all believers the way to everlasting life; the Word that assures me that the way I get in on the salvation Jesus won for me is in the Holy Word and Sacraments delivered to me in (a-hem) His Holy Church; the Word that knows absolutely nothing about a secret Rapture of the Church (let alone the secret Rapture of a bunch of goofballs who claim to know what even our own Lord confessed to not knowing), but makes it vividly clear time and time again that when our Lord does return on the Last Day, it will be in great glory, with the voice of an archangel and trumpets blaring; the Word that assures me that our Lord did not come to establish an earthly kingdom, but that His kingdom is not of this world (could he have been any clearer about this?), and that He is not coming back to establish His kingdom here on earth and rule over it for a thousand years, but that He is coming to usher in a new heavens and earth, in which He and all His saints and angels will live forever.  Yeah, I think I'll stick with that Word.  If that means I miss out on whatever party is planned for the Campingites tomorrow, so be it.  I'll live - forever!

Anyway, this whole goofy episode with Camping and his deceived followers, which is just the latest in the long line of past goofy episodes from many a false prophet who thought he cracked the "Bible code" and set a date for our Lord's return, brought to mind an article I wrote a few years back for our local newspaper.  I thought it might be prudent to share it here:


“NO ONE KNOWS THE DAY OR HOUR OF CHRIST’S RETURN”
Published in The Morning Sun on Saturday, August 1, 2006
Greetings in the Name of our Lord and Savior, Jesus Christ!
“No one knows about that day or hour, not even the angels in heaven, nor the Son, but only the Father . . . Therefore, keep watch, for you do not know on what day your Lord will come” (Matt. 24:36, 42).
It never fails!  Every time there is a conflict in the Middle East involving Israel, the self-proclaimed “prophecy experts” come out in full force preaching the imminent return of Christ.  These are the “Christian” leaders and preachers you see on television and hear on the radio quoting Isaiah, Jeremiah, Ezekiel, Daniel, and other prophets, exhorting people to believe that their prophecies are being fulfilled before our eyes in the events unfolding in the world, and especially in modern day Israel.  These events (or “prophetic fulfillments”), they say, are setting the stage for the return of Jesus Christ.
It is not that these so-called “prophecy experts” are silent when Israel is not involved in a major conflict.  On the contrary, they are always busy watching headlines and equating current events in the world with the fulfillment of biblical prophecy.  Most of them devote their entire ministry to this task.  And, most of them, by the way, are very “successful” in their “prophetic” ministries.  Their books are best-sellers and their television and radio programs attract hundreds of thousands of unknowing and unsuspecting Christians who tune in to get the latest scoop on when Jesus is going to return.
What amazes this pastor is not that people are attracted to the sensational, tantalizing, and urgent messages preached by these modern “prophets.”  After all, nearly all of them adhere to a false system of theology known as Dispensationalism, which presents a picture of the return of Christ and the end of the world as we know it that would make Steven Spielberg and George Lucas envious.  The science-fiction-like scenario of the end put forth by these false prophets, complete with a secret rapture of the Church, a seven-year tribulation period (for those Left Behind), and a literal, thousand-year reign of Christ on earth is sure to attract people.  The fact that these teachings originated in the mid-nineteenth century and have absolutely no basis in biblical truth provides little competition for a people who have fallen in love with Hollywood and its special effects.  So, it does not amaze, or even surprise, me that people are attracted to the message preached by these false prophets.
What does amaze this pastor is that people continue to cling to these “prophecy experts” even when they have proven themselves, time and time again, to be wrong.  Many of them have set specific dates and many others have provided general timeframes for the return of Christ which have come and gone.  And yet, their ministries go unscathed and continue to grow.  I do not have the space here to provide numerous examples (I wish I did!), but here is one:
In the first week of the war in Iraq, which began March 20, 2003, I was flipping through the channels and came across Benny Hinn and John Hagee appearing together on TBN.  Reluctantly, I watched and listened to them as they made it clear that the Holy Spirit had told them that the return of Christ to “rapture” His Church was very near.  They could not give a precise date, but both said that it would occur sometime in the next few months and definitely before six months had passed.  Well, here we are, nearly two and a half years later and, unless we have all been “left behind,” they were wrong.  And yet, the “ministries” of Benny and John go unscathed.  They continue to pack stadiums full of people.  Amazing!
My friends, here is the sober and simple truth.  Our Lord and Savior, Jesus Christ, will return someday in great glory to judge the living and the dead.  This belief is a fundamental article of the Christian faith.  But, the “when” of our Lord’s return is completely unknown.  Furthermore, the events unfolding in the world today, even in Israel, are not the fulfillment of biblical prophecy.  They are not specific signs pointing us to the imminent return of Christ.  The signs we are given in the Bible are purposely generic (wars and rumors of war, famines, earthquakes, etc.) so that every generation of believers will ready themselves in constant expectation of our Lord’s return.  The enduring message of our Lord to all believers concerning His return in glory is this:  Keep watch and be ready at all times, for you do not know on what day your Lord will come.
Lord, keep us steadfast in Your Word, that we may always be ready for, and look forward to, Your glorious return.  In Your Holy and Precious Name.  Amen.
In Christ,
Rev. Thomas C. Messer, Pastor
Peace Lutheran Church ~ Alma, MI
Pr. Tony Pittenger shares some thoughts here, and Pr. William Cwirla writes on the subject here and here.

And here is Pr. Jonathan Fisk's take on it in today's Ask the Pastor episode of Worldview Everlasting:

Monday morning - 8:20am. Either Mr. Camping is a deceiver or once again, the Lutherans are lagging behind in the latest church trend. Oh well, vocation goes on as does life IN the Church (where Mr. Camping will not be found unfortunately - but many of us did find Jesus on Sunday, right where He promised to be.)
Pax,
Dennis