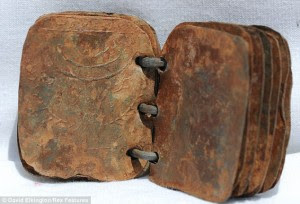 Yesterday, Dr. Paul Maier was interviewed on Issues, Etc. regarding this supposed great archeological find.  You can listen to that interview here.  Dr. Maier was careful in his comments regarding the find, noting that until more research could be done, there is simply no way to know what we have here.  It now looks like further research will be unnecessary, as it is being reported today that this is nothing more than the latest hoax - you can read about that here and here.

So, "April Fools!" to anyone out there who bought into this latest archeological hoax related to Christianity without first letting the facts be settled.

This whole thing reminded me of an article I wrote for our local newspaper five years ago when the "discovery" of the Gospel of Judas was conveniently released to the public the week before Holy Week.  It seems like every year about this time, some new find or discovery is presented to the public that will purportedly "shake up the Christian world."  As the title of the article notes, "there is truly nothing new under the sun."


“THERE IS NOTHING NEW UNDER THE SUN”
Published in The Morning Sun on Saturday, April 22, 2006
“What has been will be again, what has been done will be done again; there is nothing new under the sun” (Ecclesiastes 1:9).
As Christians prepared for Holy Week Services this year, the secular world of “scholars” was hard at work, once again, trying to discredit, or at least cast doubt upon, the claims and tenets of historic Christianity.  Of course, this is nothing new.  Each year, these so-called “scholars” rally the troops and prepare to engage in battle against historic Christianity with the hope of destroying the faith of as many Christians as possible.  Their predictable modus operandi is to go on the attack in the weeks surrounding Easter.  It is no mere coincidence that we see an increase in television specials and documentaries at this time every year calling into question the articles of faith upon which the historic Christian Church is built.  It is also not surprising (sad, but not surprising) that these “scholars” find a willing and very cooperative ally in the media of America, which thrives on controversy and conspiracy theories, especially in the religious realm.
This year, it was the Gospel of Judas that provided the ammunition for the non-believing, secular world of “scholars” in their ongoing attack against historic Christianity.  This ancient Egyptian text was discovered in 1978 in a cave in Egypt and was circulated in various antiquities markets until a little over five years ago, when National Geographic acquired and began working on restoring the text so that it could release it to the public.  After having the text for over five years, National Geographic decided to release it to the public just a few days before Holy Week this year.  Coincidence?  Come on!  Nobody is gullible or naïve enough to believe that, are they?  The release of the Gospel of Judas to the public was strategically planned.  What better time for them to release this text than a few days before Christians around the world would be re-visiting the betrayal, arrest, trials, crucifixion, death, and resurrection of their Lord and Savior?  What better time for them to try to “shake things up” in Christendom?
But, their attempt to “shake things up” is futile, as are all attacks against historic Christianity, which will always stand the test of time.  And, the ongoing attempts of the non-believing, secular world of “scholars” to discredit the claims of historic Christianity proves that the Teacher of Ecclesiastes speaks the truth when he says, “There is nothing new under the sun.”
The historic Christian Church has always been, and will always be, under attack from the non-believing world.  In fact, the Gospel of Judas itself is not a “new” discovery.  The church father Irenaeus (130-200 A.D.), in his Against Heresies, wrote, “They produce a fictitious history of this kind, which they label the Gospel of Judas.”  The “they” to which Irenaeus refers are the Cainites, which was a Gnostic sect that arose in the second century.
Ancient Gnostics were yesterday’s “New-Agers.”  They formulated their own version of Christianity (which was no Christianity at all!) based on the ridiculous and heretical premise that they possessed the special, spiritual knowledge (gnosis) necessary for salvation.  For them, salvation occurred when the soul (or spirit) was released from the prison of the evil, material body and allowed to ascend into the spiritual realm through the special knowledge known only to them.
The ancient Gnostics attempted to validate their brand of “Christianity” by producing several false gospels (including the Gospel of Judas) and attaching the names of the apostles (or other famous, biblical characters) to them.  The early Christian Church recognized and rejected these false gospels along with the mystic, cultish, heretical sects of Gnostics who wrote them, right away.  There was no battle within the early Christian Church over which gospels to include in the New Testament as is often alleged today by opponents of historic Christianity.  The early Christian Church universally rejected the Gnostics and their false gospels as soon as they appeared.
But, the war wages on.  With the resurfacing of these false gospels, the Christian Church is once again forced into battle to defend the truth against those who attempt to rewrite history and discredit the claims of historic Christianity.  Oh yes, there is truly “nothing new under the sun.”
The Good News is that there is nothing new about Jesus Christ either.  He is the same yesterday, today, and forever.  Faith in Him remains the only way to salvation and nothing, not even the gates of Hades, shall ever prevail against His Church!  In His Holy and Precious Name.  Amen.
In Christ,
Rev. Thomas C. Messer, Pastor
Peace Lutheran Church ~ Alma, MI
Posted by Rev. Thomas C. Messer, SSP at 3:33 PM