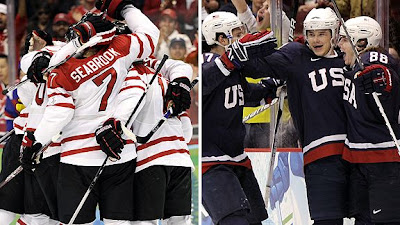 So, it has happened.  It has played out as I hoped.  The Americans and Canadians will meet in the Gold Medal game tomorrow afternoon, a re-match of their earlier meeting in the prelims.  I have been very impressed with the play of our boys.  They played a great, smart, and responsible game against the Swiss in the quarterfinals, carrying the play throughout the game and allowing very few chances against them.  Miller was stellar in net again, turning aside the few opportunities the Swiss mustered, and the team skated itself to an impressive 2-0 shutout victory.  Then they met the Finns in the semifinals yesterday.  I really thought this was going to be a big test for the Americans, but it turned out to be, much to the surprise of just about everyone who follows hockey, a big blowout.  The game was over less than ten minutes into the first period, which saw our boys put up a six-spot and secure their place in the final.  What impressed me the most about that game, even more than the shocking 6 goal outburst in the first, was how the boys played the rest of the game.  They didn't score again, but they didn't sit back and let the Finns come at them, either.  They played solidly, continuing to carry the game and make smart decisions with the puck.  Miller was great again, turning away every puck that came his way.  The one goal which was allowed by the Americans came against backup goalie, Tim Thomas, who entered the game midway through the third, which was a smart move made by the coaching staff, giving Miller some rest and getting Thomas some playing time.  The goal was hardly Thomas' fault, as the shot deflected off his own defenseman to find its way into the net.  I'm really hopeful that the Americans will continue to play their game tomorrow against the Canadians.  If they do, they have a good chance of bringing home the gold.

As for the Canadians, their road to the finals was much easier than I thought it would be.  They made easy work of the Germans in the qualifying round, besting them 8-2 (which was really no surprise).  But, their 7-3 victory over the Russians in the quarters shocked the hockey world, I think.  Not that beating the Russians was necessarily shocking, but to beat them in such a decisive fashion, was unexpected even among Canadians, if they're being honest.  Much like the Americans' victory over the Finns in the semis, this game was pretty much over in the first period.  Last night's semifinal game against Slovakia seemed like an easy skate to the final for the Canadians as well, until about 5 minutes left in the game.  They went into the third period with a commanding 3-0 lead, but the Slovaks managed to get a couple by Luongo, which gave them a huge energy-boost and made for an exciting finish.  They really took it to the Canadians for the last five minutes and had several opportunities to tie the game and send it into overtime, the greatest of which came with about ten seconds left when Pavel Demitra missed a wide open net, ringing the puck off of the crossbar.  I think the Canadians were guilty of sitting back in the third, which allowed the Slovaks to make the surge they did.  It was one of the most exciting finishes to a hockey game I've seen in a while.  And I could hear the collective sigh of relief from the whole nation of Canada from here in Michigan.  They were very fortunate to escape with a regulation victory last night, and they know it.

So, it is set.  Team USA vs. Team Canada for all the marbles.  I can't wait to watch and see what happens.  Either team is capable of blowing out the other, especially if either goalie lays an egg.  I really hope that doesn't happen (well, I wouldn't mind it so much if the Americans did the blowing out), and I doubt that it will.  I'm looking for a well played game that will come down to whichever team is able to avoid crucial mistakes and to capitalize on the opportunities they're given.  If Miller continues his stellar play, I really like the Americans' chances.  We need to play our game, using our speed and physical play to create chances and convert them into goals.  If we can whether the storm of the first ten minutes of the game (since I'm sure the Canadians will come out flying) and keep it close, we'll have a chance.  Of course, who knows, maybe we'll come out and put up six goals in the first period again.  What?  It could happen.  And that would be super sweet, not to mention good for my blood pressure. :)  Whatever the case, I'm just happy that the two best teams, at least in this tournament, are playing for the gold.  They both deserve to be there and, win or lose, both teams (and their fans) should be proud of their performance in these Olympics.  Can't wait for the game!
Posted by Rev. Thomas C. Messer, SSP at 2:20 PM

It's been a great tournament, even without the fights (hint, hint, Gary Bettman!)! I can't wait for tomorrow's game, and now thoroughly regret having arranged for an LSF trip to the Saginaw Spirit game, which will take place at the same time the gold medal game will be played. We'll all be following along on our phones, no doubt! :-)

P.S. Don't forget winkle Tuesday at Our Savior, Midland! I'd say the loser could buy the winner lunch, but I'm guessing KFC will be the name of the game :-)