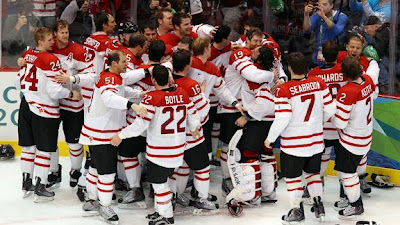 I began playing hockey at the age of 4 and continued to play until I was almost 30.  I'd still play today if I wasn't so out of shape.  I love the game.  There is nothing like it.  But, one thing I learned very early on about hockey is that the team that plays the best on any given day doesn't always win.  I suppose that's true in most sports, but there seems to be an added element to it with hockey.  I've watched the Red Wings completely demolish their opponents only to lose on many occasions.  That's hockey.  And, I saw a little bit of that play out today in the gold medal game between the Americans and Canadians.

I don't say that as a bitter fan whose team lost the game.  And, I certainly don't want to belittle the Canadian squad.  They played well.  For spurts during the game, they were better.  They were opportunistic, capitalizing on a couple of American mishaps to get out to a 2-0 lead.  But, the Americans took it to them for the majority of the game, and I was very impressed with that.  They have no reason to hang their heads.  They outplayed a team much better on paper.  They looked a lot hungrier and seemed to want it much more.  But, they lost.  That's hockey.

I was really quite stunned at how the Canadians played the third period.  After coming out flying for the first five minutes, hitting the post on a couple of occasions, they fell back and played "not to lose" for the remainder of the period.  While I was thrilled to see this as an American fan, I was disappointed to see it as a hockey fan in general.  When you have the most talented team in the world and you're playing for the gold medal in front of your home fans with a lead, you go for the kill.  I'm not saying that you completely open things up.  Play smart.  Be responsible.  But, don't resort to the boring, trap-style, defensive game of the old, boring Florida Panthers.  It's just depressing to see a bunch of all-stars playing like they're from Germany - dumping the puck, sending one man in, and falling back to wait at their blue line.  I would have thought they would have learned their lesson against the Slovakians, but they didn't.  They made the same mistake, only this time it cost them.  It should have cost them a lot earlier than it did.  They were fortunate that the Americans were not able to tie things up until 24 seconds left.  What was Babcock and company thinking, anyway?  Just stupid.

But, they survived and lived to play for overtime, where the Canadians were definitely the better team.  Of course, this had a lot to do with the ridiculously stupid format of playing 4-on-4 for 20 minutes.  When you have the more talented team, you're going to have a much bigger edge in this format than in 5-on-5.  And, that showed in this game.  The Americans hung for as long as they could.  But, they were outmatched in this format and unable to muster much pressure at all.  4-on-4 is fine for a 5-minute overtime, as in the NHL.  It's even okay, though not preferable, for 10-minute overtimes in the earlier rounds of International tournaments like this one.  But, when you're playing for the gold medal?  Stupid.  Let the dang teams play.  In the NHL, when you reach the playoffs, the 4-on-4 and shootout formats are dropped, which is as it should be.  If you're better than the other team, then prove it by beating them while both teams are at full strength.  Play until someone scores and wins.  I detest this 4-on-4 and shootout nonsense in International play.  I have ever since they adopted it.

None of this is to say that the Americans would have won had they played real hockey in overtime, just that the game would have been decided by playing REAL hockey, with both teams at full strength.  And, anyone who knows hockey knew that the Canadians would have the edge going into overtime with this stupid format.  Hey, why not just play 3-on-3?  I'm sure some knucklehead in a suit who had to have his dad tie his hockey skates until he was a Bantam has already thought of that.  I swear, as much as I love the game, I'll stop watching it if they ever do that.  In fact, if they ever start playing 4-on-4 in playoff overtimes in the NHL, that will be it for me, too.  The NHL Competition Committee was actually just one vote away from changing the overtime playoff rules just last year.  The new rule would have resulted in the teams playing a 20-minute, 5-on-5 period to begin overtime, but then going to 4-on-4 if additional periods were needed to decide the game.  I'm glad it got voted down, but it wouldn't surprise me to see it get passed sometime in the near future.  And, if and when it does, as I said, I'll be done as a fan of the NHL.  There is nothing in all of sports that compares with the excitement of overtime hockey - stop messing with it in a silly attempt to "improve the game."

But, enough of that.  I don't want to sound like a sore loser, after all - oops, probably too late for that, huh? :)  Seriously, I am happy for the Canadians.  I'm glad Crosby scored the winner.  He is one of the best players in the game today and a lot of fun to watch.  And, I've always been a fan of Iginla, who paid the price to make the play and give "Sid the Kid" the opportunity to beat Miller for the win.  It was great to see the joy on Stevie Y's face, and, indeed, on the faces of all the Canadian fans, who love the great game of hockey and live and die with their team.  I'm happy for them all.  Heck, with my great love of hockey, I've always thought of myself as a Canadian at heart. :)  Of course, I would have much preferred for the Americans to beat them, since the only thing better than seeing the Canadians win is to see them lose to us. :)  And the Americans played well enough to beat them today.  But, it wasn't meant to be.  Oh well.  That's hockey - although not exactly REAL hockey, but, again, I digress! :)  What can I say?  I'm a purist.  Changing the rules for overtime to "add excitement" to the game is a bit like removing the altar to make room for the "praise band."  Far from adding excitement, it takes away from the purity of the game - on both counts, if you get my drift. :)

Thanks Tom, that was an incredible game!

And I'm with you - what's with Babcock sliding into the trap in the 3rd? (I didn't see the second, but I've heard similar criticism). Playing 'not to lose' is not how you play the game. It may work for New Jersey and Anaheim (both of whom rode it, with Anaheim coached by Babcock, to the cup final in 03), but it makes for the most boring hockey period. The 4 on 4 was also lousy - it's not the same. It's overtime of the Olympic final, for goodness' sake - let them play!

Miller was, far and away, the MVP of the tournament (and an MSU standout, and has an LCMS grandmother, AND was married in an LCMS church :-) ). He has nothing to be ashamed of at all, though the loss surely hurts. He didn't let the team down one bit.

I hope Bettman acquiesces and lets them play in Sochi.

I wanted the US to win, but if we have to lose, let it be to Canada on their home turf!

As a bonus, Russia didn't have a prayer this time around :)

I personally think the Russians were under serious political pressure (perhaps from Putin? We all know how upset he got when the male figure skating gold went to an American instead of a Russian) to include a handful of KHL (Kontinental Hockey League) talent, to show the world (and the Soviets...er...Russians) that the homegrown league is just as good as the NHL. That's the only rational explanation for the inclusion of Federov and Morozov on that roster. As we used to say, 'Better luck next time, comrades!'

Great game and great commentary. My late father managed Munn Ice Arena at MSU so I know a lot about the Miller family and their hockey dynasty.