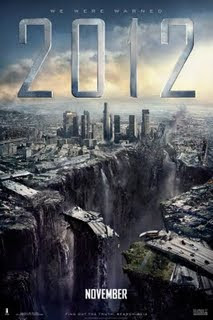 So, I went to see the movie last night with a few of my kids and a few friends from church.  None of us were very impressed.  The special effects were cool, sure.  But, the story line was unbelievably unrealistic and woefully predictable.  How many times can the special characters escape danger just in the nick of time?  There were far too many "oh boy, that was close" events in this movie.  It was actually rather comical.

There is a lot of talk about this movie being an apocalyptic thriller depicting the end of the world, but it's not that.  It's just another installment of mankind surviving what should be its utter annihilation.  Director Roland Emmerich seems to have a fetish for this theme.  First, he brought us "Independence Day," in which aliens threatened to wipe mankind out, but, alas, mankind found a weakness and avoided extinction (that was actually a decent movie).  Then came "The Day After Tomorrow," in which global warming takes a shot at erasing mankind from the planet, but, alas, mankind finds a way to survive (that was a horrible, not-worth-watching, movie).  And now, in "2012," mankind's enemy is the sun, which causes the earth's core to overheat and wreak havoc on the earth's crust, causing massive earthquakes, volcanic eruptions, and tsunamis and worldwide flooding that threaten mankind's extinction.  But, again, alas, mankind finds a way to survive.  Go figure!

The theme in all of these movies is human autonomy.  Human beings are depicted as gods unto themselves, left all alone to ward off destruction and figure out a way to secure the survival of their race.  This plays well within the postmodern, post-Christian, worldview that dominates Western society, which posits that human beings are nothing more than the most sophisticated and intelligent species to evolve and inhabit this planet thus far.  There is nothing special or unique about the human race from this perspective, besides the fact that it is the most evolved race in earth's long history.  There is no God and no Divine Plan.  Whether the human race survives whatever threatens to eliminate it from existence is totally dependent upon whether or not the human race has the will and the ingenuity to do so.

But, we Christians know better.  We know that there is a God and that He has a plan in place for our human race.  We know that we human beings are not just another in a long line of species to inhabit this planet, but the pinnacle of God's Creation.  We know that the Earth was created for us, and that we were created in the image of the Triune God.  We know that the reason natural catastrophes occur on our planet is because of sin; that they are reminders to us of the Final Judgment to come.  We know that our God came down from heaven and was incarnate by the Holy Spirit of the Virgin Mary and was made Man.  So special is the human race that the Creator of the universe took on human flesh to live and die to save it from destruction.  We are not alone.  Our survival is not dependent upon us.

And, we Christians know how this world will come to an end.  It won't be from alien attack, global warming, increased solar activity, or a big asteroid.  It will happen when the trumpets blare and our Lord Jesus Christ returns in great glory.  Everything will be proceeding normally on earth when He appears.  He will come like a thief in the night.  No one knows the day or hour.  His coming will be all of a sudden and will take everyone by surprise.  So much for the Mayan calendar and for all other attempts to set dates for the end of this world.

But, anyway, back to the movie.  Besides being far-fetched and predictable, it's too long.  I don't mind long movies, but 2 hours and 38 minutes of one disaster and near miss after another is just too much.  Did anything make it to the cutting room floor on this one?

I don't want to say much more about the movie and ruin it for anyone who is planning on seeing it.  My advice would be to wait until it comes out on dvd or pay-per-view.  It's worth watching for the special effects, and the acting in the film is not horrible, but I wouldn't spend a night out and pay the extra money to see it.  You can wait for this one.  And I guarantee you that you know how it ends.  There aren't many surprises along the way.  It's not a movie that requires much brain power at all.

With all that said, here's a special effects-less trailer for the film that you might enjoy:

Way to work in a classic internets meme at the end! Keyboard Cat ftw!

Same old same old. Christians calling for the end of the world and the return of Jesus. Wrong wrong, wrong. Hal Lindsey, WRONG, Left Behind series, WRONG. Jesus is not coming back folks. Read the bible, the Kingdom of God is WITHIN. It's not out there. When will Christians ever get it right. Probably never. After all, it was the CHURCH that killed Jesus to begin with. Stupid is as stupid does.

Perhaps you should practice what you preach and do a little reading of the Bible yourself. While you are right about Hal Lindsey and the Left Behind series being wrong, your contention that Jesus is not coming back contradicts a fundamental article of the Christian faith, which is clearly revealed in Holy Scripture. Jesus is most definitely coming back in great glory to judge the living and the dead, as Christians confess in all three ecumenical creeds. The number of Scripture passages that make this clear is massive, and those who would take your advice to read the Bible would have to be blind to miss it. And, your contention that it was the Church that killed Jesus is just plain silly. It was you who killed Jesus. And me. And all sinners. Read the Bible yourself.

But, you are right about one thing - stupid is as stupid does, for sure.