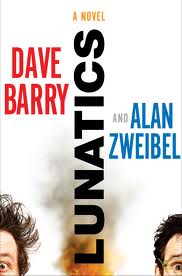 That background begins with an admission: We are not the most organized book club. That's okay. We don't have to be. What we do works for us. But, it really is important to note this fact, as it is this fact alone that lead to the laugh-fest we enjoyed last night.

When we met last month, after discussing the novel we had read, we engaged in our usual, disorganized process of deciding upon which book we would read next, which involves us rummaging through our kindles to see what's out there, and what might be of interest to the group. Sometimes, this process takes longer than the discussion we had on the book we just read. Not always, but sometimes. But always, it's disorganized. And, again, that's okay. I'm not complaining. This "fly-by-the-seat-of-our-pants" method works for us. It's fine. Yes, it can be a little annoying at times, but you'll never hear me say that out loud. This is the method the group has decided to use. I'm fine with it. Really, I am. The fact that I've made suggestions on how to make our book club more organized, which have always been summarily shot down by the group, should not in any way give the impression that I'm not totally down with the ridiculous, painstakingly disorganized manner our book club uses to determine what to read. I enjoy the hours of not having a clue what we're going to read next. I think it's great to frantically search through our kindles and read summary after summary of prospective books in the hope that one of them will eventually meet the approval of the club members. I mean, what could be better than that?

So, we're not the most organized book club. That's okay. We don't have to be. What we do works for us and, as I've made vividly clear in the preceding paragraph, no one could possibly be a bigger fan of our disorganization than yours truly. It's totally awesome. If there was a time when I didn't think our disorganization was totally awesome, and I'm not saying there ever was, I really, truly do believe in that total awesomeness now.

You see, it was the total awesomeness of our disorganization that led us to choose Lunatics by Dave Barry and Alan Zwiebel as our book this past month, a book we most likely would not have chosen had we been the more organized book club I may have once desired us to be (not that I've ever had such a desire, mind you).

Hilarious sounded pretty good to the group, since we had just read an action/suspense novel that was neither very action-packed nor suspenseful (which is what happens sometimes with our totally awesome disorganized method, but I digress). So, we all in unison directed our kindles to the new Barry book. Upon reading some of the reviews, we noticed that many were saying that this new book was good, but not quite as funny as his previous book, Lunatics. More funny sounded more better to us, so, after something like sixty hours (again, by hours, I mean minutes), we all said, "Lunatics it is!" (The exclamation point is added not because any of us were overly excited about this book, as none of us had any clue what it was or would be about. The exclamation point is added to note the enthusiasm we all had to pick a dang book and go home, as we had been hemming and hawing about what to read next for going on sixty hours [by that I mean, well, you know] at that point. We're not the most organized book club. Did I already say that?).

So, Lunatics it was. I downloaded the book on my kindle and began reading it a couple days after we had met. Couldn't put the dang thing down. Funniest book I've ever read. By far. In fact, funny seems an inadequate descriptor. To-the-point-of-tears-nearly-pee-your-pants hilarious comes much closer. Barry co-authored this book with Alan Zwiebel, and these two are absolute comic geniuses.

But, here's the thing: It's not exactly the sort of book one would imagine a church book club would have on its docket. In fact, this is what makes the disorganization of our book club totally awesome, since I'm not sure we would have chosen this book had we known that it would be filled from beginning to end with (how shall I put it?) colorful, adult humor. Not that any of us who belong to our book club are prudes or overly pietistic or anything. We're all adults, who live in the real world, but choosing this book would be like us choosing to show The Hangover at one of our Peace Movie Nights. Actually, that comparison is not really all that accurate, since our book club consists of adults only, whereas our Movie Nights are for the whole congregation, but hopefully you're picking up what I'm laying down (oh, and the inaccuracy of that comparison is also seen by the fact that Lunatics is about seventy zillion times more hilarious than The Hangover, which was pretty funny). So, maybe we would have chosen this book to read, after all, but maybe not. Who knows? It's a moot point now. We chose it. We read it. We laughed hysterically. We gave it a 5 on our 1-5 rating, which is the best rating we can give a book. Of all the books we've read to date, this is only the second 5 we've given and, truth be told, it's more of a 5 than the other book we gave a 5, but we don't have any higher rating, and we can't go changing our rating system now. We're far too organized to do such a thing.

Barry and Zwiebel write Lunatics in an alternating, chapter-by-chapter manner. The book is about two guys. The first guy is Philip Horkman, who is very clean-cut, moral (but not very religious; you know, more spiritual than religious), and full of politeness and tact, almost to a fault. He loves life. He's a quiet guy. He's an optimistic guy. He runs a pet shop, volunteers to referee girls' soccer games, and loves his wife and children. His dream day would consist of nothing more than taking care of the animals in his pet shop, talking to his kids about their day when he returned home from work, capped off by snuggling up with his wife on the couch to enjoy a glass of wine while watching a Bette Midler movie.

The other guy is Jeffrey Peckerman, who is completely rude, lewd, and crude, lacking any semblance of having a moral compass or any tact at all. He may be the most obnoxious scumbag ever to set foot on this planet. He's a forensic plumber and thinks that this makes him the most important person in the world. He hates life, largely because every other person on the planet is an a-hole, which happens to be his favorite word. He's loud. He's pessimistic. He's racist, but not in the usual way ignorant people are racist. His racism is much broader than the racism of most, as his discrimination is not limited to this or that segment of humanity, but rather embraces the entire human race, save himself, of course. He has never met another human being who didn't completely annoy him. His dream day would consist of . . . well, I'd rather not go there.

By happenstance, Peckerman ends up walking into Horkman's pet shop the next day, thinking that he's going to pick up some wine for his wife, since Horkman's pet shop is named, "The Wine Shop" (you gotta read the book), and this is where the outrageous and hilarious adventure begins, an adventure that has these two polar opposite guys joined together in hilarious happening after even more hilarious happening.

It is the contrast between the two, as they alternate chapter-to-chapter, each recounting for the reader his interpretation of the hilarious and unbelievable events unfolding throughout the book (Zwiebel writing as Horkman, Barry as Peckerman), that cause you to almost pee yourself with laughter. That's all I'm going to say about it. You'll have to read it for yourself to see what I mean.

And all this because we're not the most organized book club, which really, truly is a totally awesome thing, as I've always known and totally never, ever doubted.
Posted by Rev. Thomas C. Messer, SSP at 3:19 PM

Well, I didn't want that to dominate the post. ;)