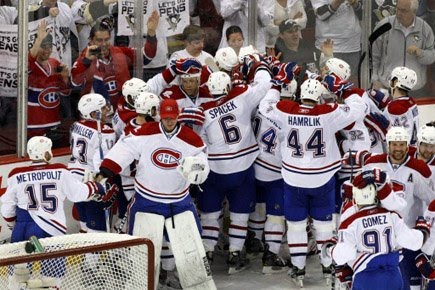 Wow!  Not only did the Canadiens dispatch of the defending Stanley Cup champs, but they did so in convincing fashion, ousting the Penguins 5-2 last night.  Who would've thunk it?  This Halak fella is for real, that's for sure.  He's turned in one of the greatest playoff goalie performances in recent memory thus far, and if he can continue his stellar play, the Habs could go all the way.  Unbelievable, really.  But, then, it was rather unbelievable that the Canadiens would even force a game seven with the Penguins, let alone win it.  Sid the Kid and company get to work on their golf games now - when the shock wears off, that is.  I almost feel sorry for them - almost. :) 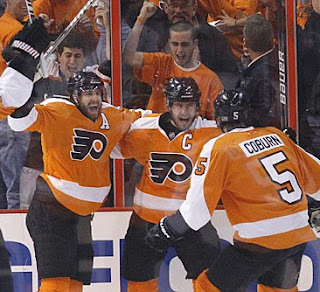 The other semifinal series in the East is pretty exciting, too.  The Flyers have come back from being down three games to none to force a seventh game.  If they can complete the improbable comeback with a victory in game seven, they'd be the first team to do so since the 1975 Islanders came back to defeat the Penguins.  Before those Islanders, you have to go back to 1942 when the Maple Leafs came back to defeat the Red Wings in the Stanley Cup Finals.  Those are the only two teams in NHL history to accomplish what the Flyers hope to do in a couple of nights.  History in the making?  We'll see.
Posted by Rev. Thomas C. Messer, SSP at 8:18 AM