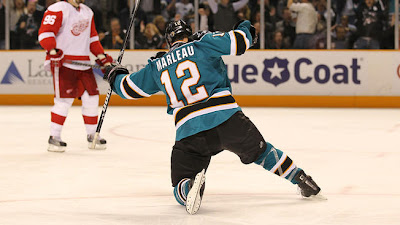 I wish I could blame this one on the refs, but I can't.  The Wings were just flat out out-played last night.  The Sharks definitely wanted it more.  It was pretty frustrating to witness, especially after the Thursday night thrashing the Wings put on the Sharks.  How can a team play so well and so full of energy and then come out two nights later and be so flat?  I don't get it.  They didn't play with any desperation at all.  It was one of the worst games I've seen the Wings play in years.  If goalie Jimmy Howard hadn't stood on his head, this game would've been a repeat of Thursday night with the opposite result.

Oh well.  There's always next year.  I give the Wings credit for enduring an injury-filled season and turning things around just in time to make the playoffs and go on a run, short as that run turned out to be in the end.  Looking on the bright side, the boys get to get out the golf clubs and hit the links a whole lot earlier than they have in the past few years - that's a bonus, for sure! :)

I hope Lidstrom comes back for one more year!
Posted by Rev. Thomas C. Messer, SSP at 4:03 PM