A "Christian" Is Not a Christian 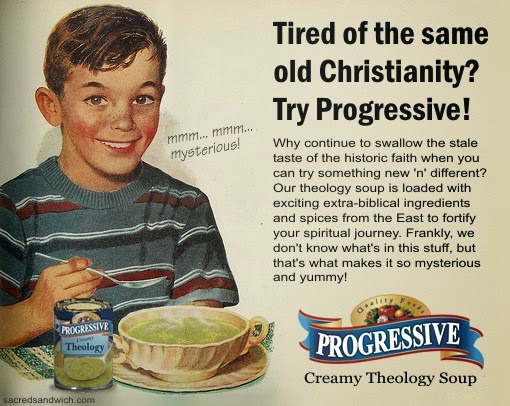 A friend of mine shared this blog post with me a couple days ago. The author, a young man named Michael Harris, wants to keep the heritage of his Evangelical upbringing, but without all the doctrinal baggage. He wants to be "Culturally Evangelical" in the same way that many Jewish people are "Culturally Jewish," i.e., still remaining "in the community" and retaining the "label," but without actually buying into the belief system and all the doctrinal stuff of the community. He writes,


Even though I’m no longer a Christian by doctrine, I’m proud of much of my heritage. But the world’s largest religion doesn’t yet have a category for people like me — you’re either an actual believer or you’re just a lukewarm Christian, and that's the kind of Christian God spits out of his mouth.

He goes on to give a brief synopsis of his Evangelical upbringing, how he bought into it all growing up, but then went to Oral Roberts University straight out of high school and came "back home really (really) pissed." He couldn't believe that he had not only accepted, but also promoted, all the zany doctrinal stuff of his childhood. He was ashamed that he had been spreading what he now understood to be the unreasonable, archaic, out-dated, and bigoted teachings of "Christian Fundamentalism." He had been "brainwashed with extremism," but no more. His eyes were now open and he has no desire to go back.

At the same time, he still loves much of his Evangelical upbringing. He doesn't want to give it up wholesale. He still thinks there is much about Jesus that is pretty cool, too, even though he no longer considers Him to be the way, the truth, and the life. That rising from the tomb business is really no different than the silliness of "speaking in tongues" or the "faith-healing" nonsense he knew growing up, but experienced in full at Oral Roberts University. Jesus is just one of many teachers throughout history to be celebrated and admired. Christianity is fine, so long as it is stripped of its exclusive claims and supposed bigoted doctrines, and is whittled down to a philosophy or way of life that you can define for yourself.

What I want to say to this young man is:

Congratulations! What you've just described is the vast majority of what passes for Christianity in America today. You are not alone. There is no need to whine and moan, as if you have no place to call home. You don't even need to add the word "Culturally" before "Evangelical." Just call yourself an "Evangelical." It's all good. Most people who have likewise abandoned, or never really knew, the Christian doctrines taught in Holy Scripture (not exactly the same as what you grew up with in Evangelicalism, but that's for another blog post) just call themselves "Christians." It's just a label. Nobody really cares. Don't fret. Go ahead and use the label. Everybody's doing it. And, if you do feel some sense of guilt for using the label "Christian" or "Evangelical" to describe yourself, since you're no longer a Christian by doctrine, my advice would be to just add the word "Progressive" before either of those words. I mean, why reinvent the wheel here? "Progressive" Christianity is all the rage these days, and they would welcome you home to their "doctrine-less" version of "Christianity" with as much vigor and joy as the father welcomed the prodigal son in that one Bible story I'm sure you know. Heck, given your testimony and ability to write, I have no doubt that you would be eagerly welcomed to become one of their "preachers." So, again, don't fret. There is plenty of room for you in Americanized "Christianity" today. You are in the majority, by far.

But, no, you are not a Christian. You are a "Christian." You are wrong in thinking that the world's largest religion doesn't yet have a category for people like you. It does. It always has. That category is heretic or unbeliever or pagan (take your pick). I know, I know, those are deemed words of hate and intolerance today, and we can't have any of that. But, the one, holy, catholic, and apostolic church is not interested in how the world defines hate and intolerance. She is also not interested in what culture decides is good and bad, right and wrong, righteous and evil, and so forth. And, she doesn't really care about your views or opinions on this, that, or the other thing any more than she cares about mine or anyone else's. Instead, she confesses the Three Ecumenical Creeds (Apostles', Nicene, and Athanasian) and minces no words in saying, "Whoever desires to be saved must, above all, hold the catholic faith. Whoever does not keep it whole and undefiled will without doubt perish eternally." Call it hate or intolerance or bigotry, if you like. She's used to being called names.

So, yes, you can label yourself however you like. You will find many friends. 78% of Americans still claim to be Christian, but the vast majority of them are "Christian," like you. It's just a label. It doesn't really mean anything to them. And, you can find "Christians" across denominational lines, so that there are plenty of "Catholics" and "Lutherans" and "Baptists" and "Methodists" and "Pentecostals" and "Non-Denominationals," etc., to join you "Evangelicals" in the melting pot of today's "Progressive Christianity."

But, no, you can't really have your cake and eat it, too. You can't be a Christian on your own terms. It doesn't work that way. You don't get to pick and choose which Christian doctrines you want to keep and which you want to discard. You don't get to cast aside any of the core Christian doctrines confessed in the Creeds, mentioned above, and remain a Christian. Jesus is not just one in a long line of spiritual gurus and Christianity is not your pet philosophy to meld according to your views and opinions. Either you're in or you're out. It is all or nothing. You're right about that. There is no middle ground. That doctrine doesn't come from "misusing or overemphasizing strange verses like Rev. 3:16," as you imagine; it is the doctrine taught in Scripture from beginning to end, which testifies of the Jesus Christ confessed in the Creeds.
Posted by Rev. Thomas C. Messer, SSP at 6:40 PM