Let's Throw the Baby Into the Dirty Bathwater 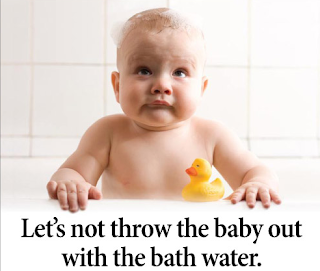 "Let's not throw the baby out with the bathwater" is, according to Wikipedia, "an idiomatic expression and a concept used to suggest an avoidable error in which something good is eliminated when trying to get rid of something bad, or in other words, rejecting the essential along with the inessential."

Fine. That makes sense. We probably should be careful not to eliminate something good when trying to get rid of something bad. I mean, I'm all for protecting babies from being thrown out with the bathwater. But, as is the case with all such idiomatic expressions, this one, cute as it is, often gets mega-abused, especially within the church.

This expression gets abused because many assume that every resource advertised as Christian contains a baby, no matter how dirty the bathwater may be. But, this is simply not true. Often, such resources are completely baby-less and filled with nothing but dirty bathwater.

I heard this expression a lot a decade ago when Rick Warren came out with his, "The Purpose Driven Life," which was quickly followed upon with, "The Purpose Driven Church," and several other "Purpose Driven" resources. Many pastors and congregations in the LCMS promoted Warren's resources (some still do), claiming that there's good stuff in there amidst all the bad stuff, i.e., we shouldn't throw the baby out with the bathwater.

To this day, I can't find a baby anywhere in the dirty bathwater of Warren's "Purpose Driven" nonsense. It's all just dirty bathwater, from beginning to end. The baby some LCMS pastors and congregations claim to find in Warren's nonsense doesn't actually exist. If their use of Warren's resources actually produces a baby of some kind, it is because they themselves added the baby when they magically "Lutheranized" Warren's stuff. But, that is quite a different thing altogether, isn't it? That's not avoiding throwing out the baby with the bathwater; that's throwing a baby into the filthy bathwater. And, that's gross. I mean, really, who would support throwing a nice, clean, cute, cuddly, beautiful baby into a bathtub filled with filthy, disgusting water?

The same could be said about most of the resources produced by pop-American "Christian preachers," writers, leaders, etc. There's no baby in Joel Osteen's stuff, or Joyce Meyer's stuff, or Rob Bell's stuff, or Beth Moore's stuff, or most of the emerging-emergents of our day and age. In fact, I know it sounds awful, but the vast majority of resources one finds lining the shelves of Christian bookstores today are baby-less, filled with nothing more than dirty bathwater. We might manage to find a pacifier or rubber ducky or two as we sift through the filthy bathwater, but we'll not find a baby there, unless we so twist and distort these resources in such a way as to throw a baby in there ourselves. But, again, who would support such an atrocity?

All of that said, there is certainly a place for this idiomatic expression within the church. I mean, let's not throw out the baby with the bathwater here. There are many serious theological resources which are not wholly orthodox, but have much in them worthwhile and edifying. I have a plethora of such resources in my own library, even as I have a section in my library of nothing-but-dirty-bathwater resources, as I think it's important to know the nonsense being marketed as "Christian" out there today, so that I might warn the flock entrusted to my care about it.

But, my point here is that too often this phrase is used to support the promotion and use of resources that are completely baby-less. It doesn't always apply. Those who support the promotion and use of such baby-less resources can scream "Let's not throw the baby out with the bathwater!" till their blue in the face, but what they really mean is, "Let's throw the baby into the dirty bathwater."

Excellent! A pastor once told me he'd rather catch me coming out of an adult book store than a Christian book store. Sad, but true.